While the enemedia pisses and moans about ‘the plight of the Rohingya’,(illegal Muslim invaders in Burma) nobody cares for the local Buddhists of Rakhine state. The worlds corruptocrats and a multitude of aid organisations Â dance to the tune of petrodollars. Â Nothing else matters anymore.

A U.N. envoy on Monday urged Myanmar to allow the return of aid groups forced to flee attacks in Rakhine state, warning their departure threatened “severe consequences” for Muslims sheltering in camps from violence by majority Buddhists.

They should be Â given their marching orders.

The UN Refugee Agency (UNHCR) is seeking access to hundreds of Somalis detained by Kenyan authorities as part of an ongoing major security operation.

Kenyan authorities have detained over 3000 people since the launch of a majority security operation last week, including 69 who have already been sent to court, according to a senior government official.

Its getting more crazy every day:

This stuff is hard on the brain. I can’t help but spit when I see overpaid moochers and looters from this long discredited ‘world body’ vomit idiotic accusations at Israel, knowing full well that wife-beating is endemic in the Islamic world. 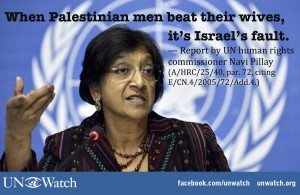 In herÂ recent reportÂ to the U.N. Human Rights Council, High Commissioner for Human Rights Navi Pillay revives the bizarre charge, made by one of her colleagues in 2005, that when Palestinian men beat their wives, it’s Israel’s fault:

Violence against women
Women in the Occupied Palestinian Territory face multiple layers of violence and discrimination. The analysis made by the Special Rapporteur on violence against women in 2005 remains valid. She found that the combination of decades of Israeli occupation, the use of force against Palestinians by Israel, the different forms of resistance used by Palestinians against such use of force and the patriarchy prevailing in Palestinian society expose women to a continuum of violence in all spheres of life.

The 2005 analysis invoked by Pillay was published in aÂ reportÂ byÂ Yakin ErtÃ¼rk, then the UNÂ Special Rapporteur on violence against women.

Why do Palestinian men beat their wives?Â The report tells us:

Women with husbands explained that the dire economic situation and the pressures of the occupation have made men more violent because they have lost their ability to provide and protect â€” two essential elements of manhood in a traditional patriarchal society. As men become stripped of their manhood, women become the shock absorbers of the crises as targets of domestic violence.

In other words: it’s Israel’s fault.

This dangerous theme of moral displacement pervades the report:

Security measures are directed at the entire Palestinian population; in this regard, women are subjected to violence emanating from these measures in similar ways to other members of the society. However, owing to the diverse ways in which occupation and patriarchy intersect, the direct and indirect impact of security measures tends to have specific and compounded consequences for women. In order to demonstrate this, I focus on four measures employed by the Israeli authorities…

By Navi Pillay regurgitating Erturk’s 2005 canard, the UN is once again telling Palestinian men that they have no moral agency, and bear little or no responsibility for their inhumane actions against women.

What the UN is doing, once again, is to displace moral responsibility and prime agency. Palestinian men are not primarily to blame for their violence against women, says the UN. Israel is.