Jordan has formally protested restrictions imposed by Israeli authorities on Muslims seeking to pray inside Al-Aqsa Mosque, in East Jerusalem.–What a bunch of shiites.

The ‘Palestinian’ daily al-Hayat is reporting that Israel has revoked the travel privileges of ‘Palestinian Authority officials’ and hasÂ barred members of the ‘unity government’Â from traveling between the ‘West Bank’ and Gaza. It’s about time. Â Â The decision prevents top-ranking Palestinian Arab officials from moving back and forth between Gaza and Ramallah. Â (Carl in J’lem)

So tell me again: what’s the difference between Fatah and Hamas? Â United against Israel: Fatah, Hamas, Hezbullah… Kerry

The “temporal division” of the Temple Mount becomes reality

For years, Muslims have been warning that Israel is planning a “physical and temporal division” of the Temple Mount, similar to how the Cave of the Patriarchs in divided between Muslim and Jewish sections and how at certain times of the year it becomes exclusively either Jewish or Muslim.Since the idea of peacefully sharing a holy spot with the hated Jews is anathema, Muslims have been closely reading Israeli religious websites for any indication that Jews plan to ascend to their holiest spot and they then call on Muslims to “defend Al Aqsa” – to physically prevent the Jews from stepping foot in the entire area. Sometimes their riots are successful, and they congratulate themselves; other times Israeli police put restrictions on them and the Jews are able to respectfully tour the area without fear. 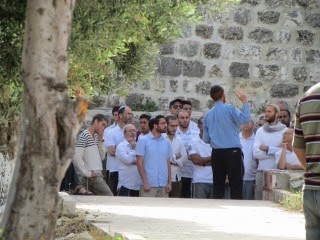 Tomorrow is the Jewish holiday of Shavuot, and – as usual – Muslims planned to riot to prevent Jews from entering the Temple Mount. This time, in what may be a first, Israeli police banned practically all Muslims from the area to allow the Jews to walk around without being attacked.

In other words, the “temporal division” isÂ actually happening today and tomorrow,Â in a perfect example of a self-fulfilling prophecy.

The Temple Mount became Jewish again, at least for one day, on Tuesday. Temple organizations reported that about 400 Jews had ascended to the Mount in the morning hours, and that police allowed them in without undue delays.

Most of the gates to the Mount were closed, and Muslim worshippers, who often harass Jews on the Mount, are not being allowed in. This is happening because police and the Israel Security Agency (ISA, or Shin Bet) have received intelligence about “malicious intentions” and Islamist incitement calling on Arabs to riot and prevent the Jews from entering.

Only a few elderly Musims could be seen on the Mount, reported Temple activists.

Shavuot is one of the three annual pilgrimage festivals on which the Israelites were commanded to come to Jerusalem to celebrate, in Temple times. The others two pilgrimage holidays are Pesach and Sukkot.

Pesach on the Temple Mount was a mirror image of Tuesday’s calm. Likud MK and Knesset Deputy Speaker Moshe Feiglin recently called on Prime Minister Netanyahu to investigate riots by Muslim extremists on the Temple Mount, and to take action to put an end to intimidation and violence against Jews on Judaism’s holiest site.

Muslim and Arab websites areÂ seething, from the mostÂ secularÂ to theÂ religious.

The Waqf is calling an “emergency press conference” soon to bitterly complain about those pesky Jews insisting on basic religious rights.