Who started the fighting? The UN lies, as usual 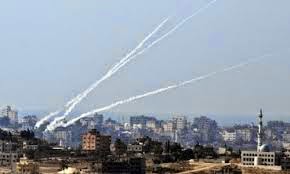 Here is the UN-OCHA-OPTÂ backgrounder on the current situation:

On 7 July 2014, the Israeli army launched a large military operation in the Gaza Strip, codenamed “Protective Edge”, with the stated objective of stopping Palestinian rocket firing at southern Israel and destroying the military infrastructure of Hamas and other armed groups.

This development marked the collapse of the Egyptian-brokered ceasefireunderstanding reached between Israel and Hamas in November 2012, which has been gradually undermined since December 2013.Â The latest escalation round started on 11 June, when Israeli forces targeted and killed an alleged member of an armed group,along with a child accompanying him, and Palestinian factionsÂ respondedÂ by shooting rockets at southern Israel. Tensions further increased following the abduction of three Israeli youths in the southern West Bank, on 12 June, which the Israeli government attributed to Hamas.

So the UN says that ISrael’s current operation is what marked the collapse of the ceasefire, not the incessant rocket firing that occurred beforehand.

Writing in Brisbane’s Courier Mail,Â Paul SyvretÂ argues that “IslamÂ does not have a monopoly on hard-line malcontents and all religions and societies tend to breed their own brands of extremist ratbaggery.”

It is almost as if he is implying that Israel is waging a religious war to spread Judaism. That is patently absurd.

All things are not equal. A jihadist who joins the army of Islam to wage jihad to make the world Â Islamic is no way equal to a Jew who goes to Israel to support the IDF. People who imply this are too stupid to argue with.Â Australian Jews are not Jihadists

….the successive governments have not paid enough attention towards the Muslim communities, who lag behind in every field and who need greater attention than almost any other community.(Not. They don’t need to be given anything. They need to be kept under surveillance. They need to strive hard to prove that they have any benefits to offer the infidel society that took them in. If they cannot do that, they should be rounded up and shipped back from whence they came.)Â

More Mustardry, whining and wingeing and grievance mongering if you can stand it, here:

“I wasn’t born in England but I was brought up here, this is my country”.–Â Yasmin QureshiÂ  (Needless to mention that this sharmuta is just as repugnant as that equally despicable racist Alibhai-Brown.