From the reliable Guardian Nazis: “it all started when Israel defended itself”

And Then Israel Just Started Bombing Again For No Reason

The Guardian Is No Better Than Goebbels

The Guardian should change its name to the VÃ¶lkischer Beobachter.

The claims that Hamas is beaten are baseless.

The Invention of the Palestinian Identity

The “Palestinian” identity of Arabs living in Palestine is not thousands of years old, as many would have us believe. The truth is, Arabs living in Palestine were known only as Arabs. They suddenly understood they were “Palestinians” only after the War of 1967, when Israel re-conquered the territory it lost in the War of Independence of 1948. Before that, Judea and Samaria, together with Jerusalem, were occupied by Jordan, and Gaza was occupied by Egypt- and not a single Arab thought of himself as of a “Palestinian.” — Molschky

If Israel didn’t exist, this is what “Palestine” would look like today

Let’s pretend that the Arab fantasy of Israel disappearing came true. All the Jews leave and go to the US and Canada. The PLO is awarded their own country from the river to the sea. The UN and EU fully support the new moderate regime. Finally, the Arab vision of peace – get rid of the Jews – comes true. (Elder of Ziyon)

What would “Palestine” look like a few months later? 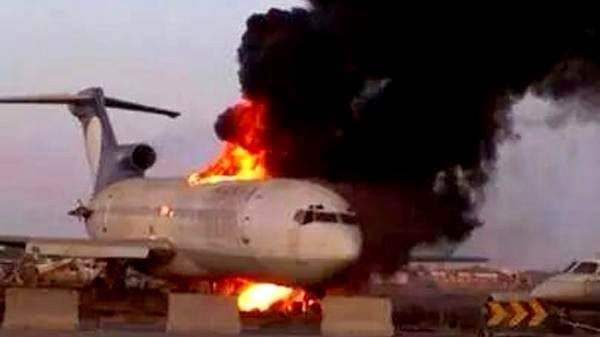 Several rockets have reportedly hit the airport in the Libyan capital, Tripoli, where fighting between rival armed groups has been raging since Sunday.

“The government has studied the possibility to bring international forces to enhance security,” he said.

Authorities had closed the airport due to previous fighting on Sunday, which medics say killed at least seven people .

Meanwhile,Â the United Nations mission in Libya said it was withdrawing its staff from Libya “temporarily” because of the deteriorating security in the country.

Tripoli has been witnessing one of its worst spasms of violence since the ouster of longtime ruler Muammar Gaddafi in 2011.

Militias, many of which originate from rebel forces that fought Gaddafi, have become powerful players in post-war Libya, filling a void left by weak police and security and cooperating with the government to provide order.

Everyone knows that the Islamists of Gaza want to join a caliphate, not a state; that the Muslim extremists will enthusiastically kill fellow Muslims, that Christians would be threatened and forced to flee, that neighboring countries will not stand for instability crossing the borders and would be willing to fight to keep that out. Yet everyone chooses to close their eyes and pretend that a Palestinian state would be peaceful and secular and respect human rights and it would keep the Islamist groups at bay and would not allow Al Qaeda to build cells in any power vacuum.

The PA, as bad as it is, only exists because of outsiders propping it up. As soon as a state is created the outside interest would go elsewhere, as it always does. The fact is thatÂ most Palestinian Arabs are not willing to die for the PA. Yet most Hamas and Islamic Jihad membersÂ areÂ willing to die for their ambitions for an Islamist state/umma. A leadership that cannot rally the people to its side is doomed, and all the Western military aid in the world cannot change that.

Even if you believe the worst lying propaganda about Israel, the death toll in the area without Israel would be orders of magnitude higher if Israel didn’t exist.

One thought on “So what would the Middle East look like without Israel?”