“Let jihadists leave the country, but let them never come back.” –Geert Wilders

The Glazov Gang – Geert Wilders on “The West’s Battle for Freedom.”

Below is the English translation of a speech given today in the Dutch parliament by Geert Wilders, the leader of the PVV. The speech was part of a parliamentary debate about the military mission to fight ISIS in Iraq. 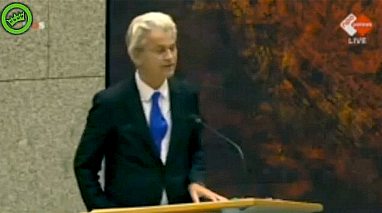 The Islamic State is an Islamic cancer. It is a poisonous snake based on the Quran and the life of Muhammad, a criminal who 14 centuries ago went, murdering and decapitating, from Medina to Mecca. His self-appointed successor Caliph Baghdadi is now at the gates of Baghdad and Damascus. He has followers all over the world, including in our country, our cities and streets. Again, people are beheaded according to the Koranic commands such as Sura 47 verse 4: “When ye meet the unbelievers, smite at their necks and when ye have caused a bloodbath among them bind a bond firmly on them.” Even moderate Muslims cannot escape violence because, according to the Koran and the Sharia, they are apostates.

All the gullible minds who say that the Islamic State has nothing to do with Islam are committing a serious politically correct error, whether they are Obama, Cameron, Rutte or Samsom.

We are at war. War has been declared against the free West. Our freedom, our culture, the future of our country and our children are at stake. We must strike back hard, in the Netherlands, in the rest of the West and also in Iraq and Syria. Hence, my party supports the Government’s decision to deploy Dutch F16s against the Islamic state. We say: Let us bomb them!

But we have no understanding for the fact that we are only going to bomb in Iraq and not in Syria. Is it OK for the Government that people are beheaded, women raped and genocide committed in Syria because a mandate under international law is missing? What a cowardice. The government says it understands the United States when they bomb the Islamic State in Syria, but it does not participate itself. Understanding, but no participation, What a cowardly half-heartedness.

Even more important than fighting the Islamic State in Iraq and Syria is fighting Islamic terrorism in the Netherlands. The security of the Netherlands should be priority number one. Our citizens have to be safe on the train, in the streets, when walking their children to school and shopping. That is what truly matters. In its letter to Parliament, the Government only devotes two paragraphs to national security. There is even more attention for issues of gender and the position of women in the Arab world. That is a travesty.

Madam Speaker, we must protect the Netherlands. That is why we were elected. To protect our citizens. Not only the citizens of Iraq and Syria, but also and especially our own people here in the Netherlands. Why is the army not deployed to protect our railways stations? And in their uniforms and heavily armed, of course.

And why do we try to stop jihadists when they want to leave our country? Last Sunday, the Minister of Security and Justice proudly said that the passports of 41 jihadists had been canceled so they could not leave to Syria or Iraq. What a stupid act. Now they walk around here, in our streets. People who want to wage jihad elsewhere, decapitate, commit attacks, walk our streets because of the decision of the Minister.

I have been saying it for ten years and I will repeat it once again:

Close the borders to immigrants from Islamic countries. Enough is enough. The Islamic culture of hatred does not belong in the Netherlands. 65 per cent of the Dutch agree with this.

Evict everyone with expresses sympathy for the Islamic State, deprive them of their Dutch passports. Let everyone with a passport from an Islamic country sign an anti-Sharia declaration.

One thought on “Geert Wilders: We Must Fight the Islamic Monster in Our Society”