After dumping on Australia and Aussies like only a muselmanic headbanger can, Elmo claims victimhood. I can’t wait to see this arrogant, supremacist piece of shiite behind bars and deported. El-Mouelhy is suing an anti-halal campaigner, Kirralie Smith, and members of the “Islam-critical” Q Society for defamation over their claims the industry is corrupt and funds “the push for shariah law in Australia”.

Its quite obvious that this is what this is all about. The denial only confirms it. Its the Mohammedan modus operandi.

Take a deep breath before you read this:

Muslims were free and honest men here in Australia well before the arrival of the British. Muslims built Mosques to worship God in, built the Telegraph line, the latest communication technology at the time and opened interstate roads that exist to this day

In the meantime the peaceful white Christians used Aboriginal women as sex slaves, killed Aboriginal man whom they regarded as sub human, kept the lot in concentration camps, stole their wage and abducted their Aboriginal c…

The oldest surviving mosque in Australia, although we know that some Australian Muslims have ancestors who were here long before the British. Arriving in the 15…

“Hate campaigns” are detracting from the reputation of Australia’s $13bn halal industry overseas, according to one of the country’s largest Islamic certifiers, which says anti-halal campaigners are “manipulating the public to harm the Australian economy”.

The halal industry has been reluctant to comment on the Senate inquiry into food certification, instigated by Liberal senator Cory Bernardi, but broke its silence on Tuesday in a submission obtained by Guardian Australia. 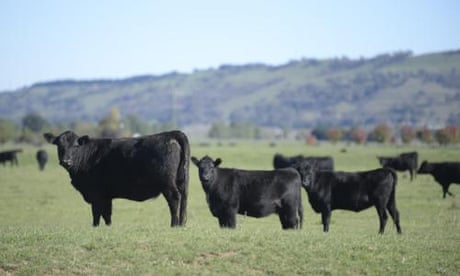 “It is against the law to vilify Jews and it is not politically correct to denigrate blacks or gays. But Muslims can be thrown to the wolves.”

El-Mouelhy, whose agency certifies mostly processed foods, hit back at claims that products such as Vegemite were being altered to be granted halal status.

A blessing was said over meat products, he said, but for other food, halal (or kosher) certifiers merely checked and approved the ingredients list.

“[Non-meat products] are not ‘blessed’ by either religion and have been sold to the public for decades in their original state,” he said.

Animals were halal slaughtered “after being temporarily immobilised by an acceptable device”, in line with RSCPA and Australian government export standards, the submission said.

(The RSPCA has said it is concerned about the “very small” proportion of kosher and halal abattoirs permitted to slaughter animals without stunning.)

The HCAA, understood to be the only halal certifier making a submission to the inquiry, said the fee paid by many companies for certification was negligible.

“A chicken company is paying at the rate of one cent for every 40 chickens. The company has contracts worth several hundred thousands of dollars a month,” the submission read. “This is a great return for the chicken company.”

It highlighted the example of Bega Cheese, which has increased its revenue and number of employees by 500% in the past decade, in part by securing halal certification that opened new markets overseas.

A recent halal industry conference in Malaysia had heard that “the Australian market [was becoming] ‘unreliable’ to importers specifically because of hate campaigns offending importers and Australia’s reputation”, the submission said.

Moreover, “many companies including HCAA had to call for police intervention because of the bullying and the death threats”.

It rubbished claims that halal certification was an example of sharia operating in Australia.

“Laws are the domain of the parliament and there are no Islamic laws passed in Australia,” it said. “This misinformation is designed to play on [people’s] fears and ignorance of Islam in preparation for ‘The Australian Liberty Alliance’, a xenophobic, fascist and anti-Muslim political party.”

The ALA, a party styled on Europe’s far-right nationalist movements, will be officially launched by Dutch MP Geert Wilders in October.

El-Mouelhy is suing an anti-halal campaigner, Kirralie Smith, and members of the “Islam-critical” Q Society for defamation over their claims the industry is corrupt and funds “the push for shariah law in Australia”.

A submission last week by the peak body for Australian food manufacturers argued the religious approval “creates more value than it costs”.

“Put somewhat bluntly, manufacturers will only pay a dollar for a certification if they expect to get more than a dollar back in sales, whether directly or indirectly,” the Australian Food and Grocery Council said.

“If they pay a dollar and only get 80c worth of value, they will drop the certification.”

The department of foreign affairs and trade also made a submission, estimating the global halal market is expected to reach US$1.6tn by 2018. “The economic incentives for Australian businesses to seek halal certification for exports are therefore significant,” it wrote.

“Were we unable to offer Australian government assured halal certification to our Muslim and other trading partners, access for our red meat exports to these markets would be limited and potentially denied, with a corresponding deleterious effect on the Australian red meat export industry.

A detailed submission was also lodged by the department of industry, noting that halal certification was “not a tax”; “unlikely to add significant costs to Australian food products”; complied with Australian animal welfare and criminal laws; and helped “Australian businesses access new growth opportunities”.

6 thoughts on “Elmo Rubs It”