South Australian Liberal senator instigated inquiry to ‘get to the bottom’ of the halal industry, which he has previously described as a ‘racket’–THEGUARDIAN.COM|BY MICHAEL SAFI (Full post below the fold…)

Elmo is full of glee and spite. Here, some excerpts from his FB page:
.
To all the bigots who have missed me, I am back refreshed after attending a Halal conference in China as a guest speaker of the Government.

Senator Bernardi made a fool of himself by not knowing what he was talking about, despite being part of the government. If he wanted to know anything about Halal certification he should have asked the appropriate ministers in his government, but he wanted to big note himself thinking that it will get him some votes at the next election. Only fools will vote for him. I think it would be more appropriate to vote for a horse like that of Emperor Caligula!

Finally I have a message for the bigots, the religiously intolerants, the Christian zealots who do not know or practice their religion, the fascists, the Nazis, the Islamophobes and Muslim haters: “Halal certification is here to stay, it will grow and prosper, with the help of the Almighty”.

Bigots beware I am back in Australia and have my sights on you. You can’t run and you can’t hide.

Either you can become a decent human being or you can self destruct from the hate that you harbour in your heart.

But look what I found here:
.
TEMPO.CO – Chief of Indonesia Ulema Counsel (MUI) Amidhan Shaberah stated that halal certification should be free of charge. He added that the same thing applies to other halal certification institute in other nations.
.
Its time to put Elmo out of biznis!

No halal certifiers will appear at Cory Bernardi’s upcoming public hearings into food labelling, which has been scheduled for one of Islam’s holiest days.

The South Australian Liberal senator instigated an inquiry in May to “get to the bottom” of the halal industry, which he has previously described as a “racket”.

More than 800 submissions were made to the inquiry, many of which were striking in their brevity, and echoed Bernardi’s concerns that certification was “forced on” retailers or funds terrorism.

Public hearings have been scheduled for Thursday, 24 September, which is also the date of Eid al-Adha, Islam’s annual “festival of sacrifice”.

Amer Ahmed, from Melbourne-based certifier the Ali-Iman Islamic Society, said the feast was “our biggest date in the Islamic calendar”. 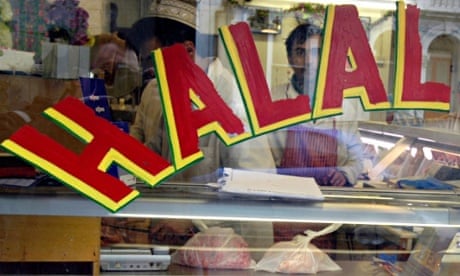 “We’ve basically decided that we’re boycotting [the hearings] because it’s a racist inquiry, it has nothing to do with halal certification,” he said.

Guardian Australia understands that seven major certifiers were approached to testify on Thursday but all declined.

Another certifier, Mohamed El-Mouelhy, said the significance of the feast day was akin to that of Christmas for Christians.

“The economics reference committee is insensitive at best and disrespectful at worst for asking Muslims to attend the Senate inquiry on the most important day in the Islamic calendar,” he said.

Ahmed said Australia’s $13b halal industry did “need a clean-up”, but that the inquiry was not serious about addressing its issues.

“If the inquiry was done on a proper pretext, we would have been happy to cooperate. But accusing certifiers of funding terrorism, and garbage like that, the starting premise is just wrong,” he said.

Among those who will testify next Thursday are Kirralie Smith, an anti-halal campaigner, and Bernard Gaynor, a former army reserve major who was sacked from the defence force last year for “conduct that demonstrates repeated behaviour inconsistent with army and defence policies”. Gaynor has lodged an appeal with the federal court over the decision to terminate his commission and is awaiting judgment.

Jewish leaders testified at an earlier round of public hearings in August, where Peter Wertheim, from the Executive Council of Australian Jewry, said scrutiny of kosher certification in Europe had “often been used as a cloak for persecution and discrimination against the Jewish community”.

Bernardi suggested at the hearing that consumers had the right to be informed about how their meat was being slaughtered and whether “prayers [were] being said over it”.

“I can only imagine the outcry if it was a priest there with holy water,” he said.

In a submission to the inquiry, the Department of Foreign Affairs and Tradeestimated the value of the global halal market would reach US$1.6 trillion by 2018. “The economic incentives for Australian businesses to seek halal certification for exports are therefore significant,” it wrote.

“Were we unable to offer Australian government-assured halal certification to our Muslim and other trading partners, access for our red meat exports to these markets would be limited and potentially denied, with a corresponding deleterious effect on the Australian red meat export industry.

A submission was also lodged by the Department of Industry, noting that halal certification was “not a tax”; was “unlikely to add significant costs to Australian food products”; complied with Australian animal welfare and criminal laws; and helped “Australian businesses access new growth opportunities”.

6 thoughts on “Elmo vs Bigots: “its a racist inquiry!””