Asking Voters Their Opinion on Immigration is WAYCIST!” 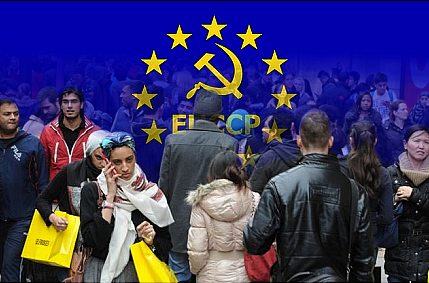 The latest lunacy to emerge from the European Parliament beggars description. The leftists that run the place brook no disagreement, and anyone who opposes unlimited immigration into the EU is branded a waaaycist. According to the gutmenschen of the EP, the Hungarians were racists just for asking voters their opinion about the proposed migration quotas.

These bizarre shenanigans seem to be a corollary to Joseph Heller’s famous Catch-22*: To question the legality of any official EU ruling is itself illegal, according to laws that you are not permitted to question.

Many thanks to CrossWare for translating this Hellerian report from the Hungarian news portal Pesti Srácok:

As soon as possible and in its strictest form the leftist opinion leaders of the European Parliament would like to see introduced unlimited mandatory migrant quotas, which are contained in the Dublin IV plan draft. They do not even want to hear about any kind of rethinking or revision of the migrant politics of the EU. This is what we found out in the meeting of EU’s “Civil Liberties Justice and Home Affairs” (LIBE) committee meeting, where our journalist (pestisracok.hu) visited. After the session we asked many Western European Liberal and Socialist politicians about their opinions. Some of them with humbling simplicity just called the V4 countries migration politics “Nazi”. Others stated that only colonizers practice the politics of exclusion, and they have evolved beyond that point. It came up that the terrorism is not really a big problem, but it is an excellent safety test for the authorities. They made it clear to us that their plan is to keep the migrants in the country they will be assigned to, by making it mandatory to provide equal and standardized care for them everywhere. In this Leftist-Liberal majority committee — with the ferocious agreement of the Hungarian Liberal Péter Niedermüller — the only experts allowed to offer their opinion were without exception on the side of unlimited acceptance of migrants. The questions and opinions of the EU’s People’s Party representatives were completely ignored.

In May the European Commission presented their plan for the corrective distribution of migrants or Dublin IV, which heavily makes use of flowery language to avoid the word “quotas” — even so this is a much harsher quota system than the earlier plan was. Based on this plan, the migrants still have to apply for asylum in the country in which they stepped onto EU soil, but based on this “fair distribution system” they would be distributed among countries if the receiving member state(s) have “disproportionately high pressure” on their immigration system.

Countries would get a “reference number” (in its maiden name: quota) based on their size and economic power, and if the number of migrants applying there for asylum reaches 150% of the original number, then the other countries would receive the overflow based on their “reference number”. The system does not consider closing down the external borders of the EU, just the opposite — with the creation of a European refugee agency it will make the illegal migration a permanent and institutionalized system. If this become enforced law, there would be no upper limit. because no matter how many immigrants arrive, some percentage would be distributed to each member state.

On Monday the LIBE conducted a hearing involving “experts” on this topic (migration). The committee makes its voice heard on sensitive issues, while it simply ignores problems which would be in its mandate. The European Parliament’s “elastic” laws makes this possible. It looks like this committee is intended to be a political weapon rather than proper representation, because in its present configuration many female liberal, socialist and communist representatives smoothly work together. Last time the committed advocates for migrant rights officially worried about democracy in Poland, and according to MEP Kinga Gál (Fidesz), it can be expected that the committee will soon take on the Hungarian referendum as well. The Hungarian Liberal Party representative Péter Niedermüller is already using every opportunity to attack Hungary and its government.

Where the Yes Gets 100 Percent!

In the session on Monday the reports of experts followed one right after another. On the 98% results of the Hungarian referendum, many members compared to election results to South Asian dictatorships, but in this hearing not even 2% was given to opposing opinions. All the “experts” made a commitment to support the European Commission’s Dublin IV plan, and the liberal, socialist and communist committee members in the Q&A part of the session zealously campaigned for their experts and praised the “fantastic presentations”. The protesting voices were ignored. The repeated questions of the right wing representatives the experts always forgot to answer: How would they ensure that migrants would stay in the countries selected for them? All the experts “forgot to answer” while they were providing rehearsed showcase answers. At the end the of the session “unfortunately” the time ran out exactly at the moment when one of the EPP [European People’s Party — right-wing conservative group; Orbán’s Fidesz is a member party there] representatives started to complain that he did not get an answer to his questions.

The session’s main guiding thought was that all member states must show solidarity and share the burden of responsibility concerning migrants. The invited experts only examined rights from the migrants’ point of view. Some really unbelievable sentences were spoken:

END_OF_DOCUMENT_TOKEN_TO_BE_REPLACED

One thought on “Welcome to the EUSSR, where no dissent is permitted”