A few days ago the French police finished clearing and demolishing the “Jungle” shantytown near Calais. The migrants who lived there have not left France, however. Some of them are being relocated by the authorities to various towns and villages throughout the country, whether the local mayors and prefects like it or not.

And some are relocating themselves. Most of those have moved to Paris, greatly enlarging the previously established tent cities in the streets and public parks of the capital.

Many thanks to Ava Lon for translating this TV news report, and to Vlad Tepes for the subtitling:

END_OF_DOCUMENT_TOKEN_TO_BE_REPLACED

Bringing Mohammedanism closer to the Parisiennes:

On Wednesday October 26 the jungle of Calais was burned to the ground by fires set by the migrants who were leaving for other centers throughout France.

The video above shows the prefect of Pas-de-Calais, Fabienne Buccio, explaining that in the culture of the migrants it is traditional to set fire to one’s lodging when one leaves.

While she, and everyone else, knows this is a wild fantasy, it is nonetheless typical of the desperate need to justify acts of violence committed by the wards of the French State, i.e., African migrants. They cannot be regarded as arsonists, but as people upholding the traditions of their culture.

– Regarding the fires tonight it’s not a surprise, we’re used to this type of behavior from the migrants, we’ve had fires for two weeks. You may not like it, but it is part of the traditions of the migrant population to destroy their habitat before leaving. It also means that they understood that the camp of Calais was finished. They have left or they’re going to leave, and before leaving they destroy their habitat and the businesses they had built. It is essentially the businesses that burned tonight.

– Journalist:  Wasn’t there any way of controlling this? There were obviously police on the scene. These migrants were leaving filthy conditions for orientation centers. Couldn’t you tell them it was useless to set the fires?

– We discussed this with leaders of the migrant communities. We met regularly with them. The leaders told us they would do all they could. We had already had this situation when they dismantled the southern part of the jungle. But the leaders told us that this is a deeply-rooted tradition in their culture. When you leave you clean, you clean, by setting fires. Since we were familiar with this situation, we adapted by calling in advance the firemen and emergency services. They were there 24/7 to take control of the fires. 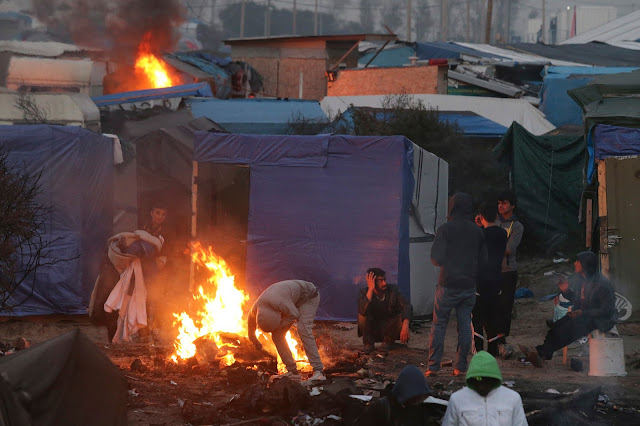 One thought on “The Jungle Relocates to Paris”