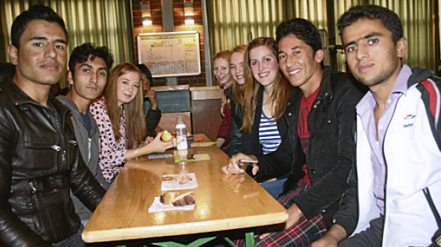 The following article makes my blood boil to an extent that I find hard to describe. If I were a German man — and I mean a real German man, not one of the swarthy-faced bucks that Angela Merkel keeps trying to pass off as “German” — I’d be dusting off my pitchfork and putting a match to my torch in preparation for a public accounting with the political elite of the Bundesrepublik.

The German government has a serious political and demographic problem. Thanks to its open-borders policy — which it seems to consider mandatory, and permanent — it has enriched itself with more than a million young men of foreign extraction, mostly from the Middle East and Africa. These hot-blooded youths have the same urges as any other males in their age group, but to their misfortune, most were unaccompanied by any young females of their ethnic group.

So the government decided to solve the problem by arranging “get-togethers” between the “New Germans” and girls “who have lived here in Germany for a long time” — that is, young ladies with fair skin and blue eyes who speak German as their native language.

To put it bluntly, the state has decided to pimp out its nubile young women to the migrant men it brought into the country through its collective madness.

Where does this leave young native German men? Are they all gay? Are they expected to find Russian brides on the internet? Or are they considered useless, worthy only of being discarded?

Many thanks to Nash Montana for translating this article from “killerbee”:

The State as Pimp?

(Caption under the picture in the article [not shown]: The mother of all pimping shows was “Herzblatt”, the Dating Game show.)

The capitalist-fascist BRD [German Federal Republic] regime is at the moment conducting a settlement policy with the goal of reducing the number of Germans within the total population.

There are multiple ways in which they do this:

And now it appears a new variant has been added.

The deciding factor for the multiplication of a population is its women.

If the CDU/CSU fascists therefore succeed in “hooking up” as many German women as possible with refugees and immigrants, they have taken an important step further.

Because a German woman who is with an immigrant and is bearing his children logistically can’t have children with a German man at the same time.

Here’s a quote by ‘Frundsberg’, who has taken a closer look at this phenomenon and provides photos and links:

“Today out of pure coincidence I came upon a news article in my city where the school leadership arranged a “come together to get to know each other” with refugees. As I looked at the picture in the article, I noticed something: In the picture there was not one male German student, but only females. The refugees shown were also not of school age anymore. I then started researching on the internet and behold, other schools in Germany had organized similar events as well. Let those pictures really sink in.”

[article then shows the three pictures]

What does any of this have to do with school and teaching? These refugees, all of them, are way past the age for going to school and, oddly, male German students are conspicuously absent.

Is what we see here a sign that minor female German students are being consciously pimped out to refugees?