When Muselmaniacs, in this case Turks, mention “crime against humanity” they mean Muslims, Muslims only. Because infidels are not considered human. Resisting the islamic expansion program is a heinous crime. “Disbelief is worse than slaughter”, Qur’an sura 2:218

Below is a compendium of German-language news translated and summarized by JLH. This group concerns the notorious push by Turkish government ministers to campaign among Turks in Europe on behalf of the upcoming Turkish constitutional referendum, which would elevate President Erdogan’s office to make him effectively Der Führer of the Ottomans.

The Turkey-related crisis is particularly severe tonight in The Netherlands — there has been rioting by Turks in Rotterdam, and a state of emergency has been declared. More on that later. 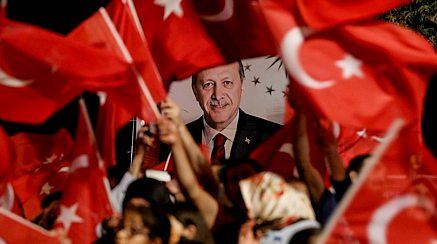 (Articles from March 8th and 9th)

The demands by Turkish leader Erdogan that his party’s politicians be allowed to exhort the Turks in Germany to vote for the upcoming referendum favored by the government must recall for some Germans in places like Cologne Erdogan’s own earlier visits, when he reminded “his people” that they should always remain Turks, never become Germans. To say nothing of more recently calling perceived anti-Islamism a “Nazi” characteristic — deeply ironic when one considers the Grand Mufti of Jerusalem and his cordial cooperation with Hitler. So the Turkish foreign minister’s visit to Berlin was already a catastrophe waiting to happen.

And, as we will see, Berlin and Germany were not the only objects of this obtrusion.

And Then Cavusoglu Mentions the Second World War

The mood between Sigmar Gabriel and his Turkish counterpart Cavusoglu was frosty. It was not a good sign that they didn’t face the press together after breakfast.

Erdogan’s foreign minister appeared at the International Tourism Exposition (ITB) in Berlin, and made a connection between hostility to Islam and the Nazi era. The mood of the exhibitors was not good.

It started peacefully. Just before 10:30 AM Wednesday, the Turkish foreign minister, Mevlüt Cavusoglu arrived at the ITB in Berlin. He had just met with Foreign Minister Sigmar Gabriel (SPD) in Berlin’s luxury hotel, “Adlon” — the two had had a “tough but open conversation.” Now Cavusoglu had a little time to saunter through the halls where Turkey was on display as a vacation land.

Surrounded by dozens of journalists, the minister made his way through the booths. Someone handed him a Turkish pastry, questions were at first not permitted. Instead, Cavusoglu inspected one booth closely. An exhibitor showed him how to paint in water color.

The tour lasted a good half hour. The tour had a relaxing effect, but his comments were not very de-escalating. “Pressure and threats came from the German government,” he maintained. Even his Berlin hotel reservation had been canceled after the management found out who they were dealing with. He had once had a similar experience in Düsseldorf.

The conversation with Gabriel was “serious,” said Cavusoglu. He had expressed his “irritation” that several appearances by Turkish politicians of Erdogan’s AKP party were not allowed. Not one of the Turkish journalists questioned Cavusoglu’s comments, nor did the one tourism manager present at the time. They didn’t want to spoil things with the government of Recep Tayyip Erdogan.

Summary of rest of article:

When Cavusoglu takes questions, the first one is when Deniz Yücel [imprisoned reporter of Die Welt] will be released. No answer.

Most of the tourism managers present will not speak for attribution, because it could become “unpleasant.” One notes that many of the Turks living in Germany now have not been to Turkey, and have no idea how (bad) things are.

The article mentions the Netherlands’ misgivings about Turkish political visits.

Next, we switch to Switzerland, where things are, if possible, even worse.

The flying visit of the Turkish Foreign Minister, announced at the last minute, has created tensions between the capitol city of Bern and the canton of Zurich. The minister is supposed to meet Sunday with members of the Turkish community in the town of Opfikon in Zurich canton…

The party of the authoritarian head of state Erdogan is pushing on the Internet for admission to Switzerland. However, the Zurich government is not at all OK with that. And its governing council has “the greatest security concerns about [granting] this permission…

The federal police had no misgivings and are used to cooperating with the local authorities in such matters.

Zurich’s protest was so vigorous that there will be a review at the federal level. Mention is made of Erdogan’s “Nazi” comment and the possibility of rioting.

Erdogan’s determined effort to contact Turks in Switzerland is explained as the result of the “controversial” referendum.

The SVP [Swiss People’s Party — pre-Trump populists] demands the visit be rejected. “He is welcome as foreign minister, but not as propaganda minister.” Poignantly, the Greens chime in that his visit would be a provocation for Kurds and government-critical Turks.

One ex-SP [socialist] member thinks it should be allowed, so Erdogan has no excuse to say Europe is against Turkey and does not honor its own principles.

Even his own diplomats want to escape him.

Volkan Karagöz is not the only Turkish diplomat to seek asylum in Switzerland for himself and his family.

And some of “his people” in Germany clearly see him unfavorably. But is this one looking for a German-Turkish party of his own?

The Greens chief Cem Özdemir has asked for the establishment of a public German-Turkish TV station. “We need a German-Turkish television station, a kind of German-Turkish arts station,” Özdemir told the Rheinische Post on Thursday. It could not be allowed that Erdogan should continue to send his propaganda via Turkish stations with no competing voice.

“For decades we have not concerned ourselves with those who have come from Turkey to find a new home here, including politically. That is now costing us. We need a Turkey pact among all parties. In domestic political terms, that means integrating German-Turks culturally and through the media,” said Özdemir.

He also mentions Deniz Yücel and 150 other imprisoned journalists.

Finally, the Austrians have a few complaints about dual citizenship.

From the Kronen Zeitung:

Thousands of citizens illegally have two citizenships. Any who are caught lose their Austrian passport. Most are caught by happenstance.

Europe is tensely watching the constitutional referendum scheduled for April 16th — a referendum that is dividing Turks in Turkey as much as it does the 300,000 people among us with Turkish roots. Erdogan’s propaganda machine is running full tilt…

How strong is the interest among Austro-Turks in the constitutional referendum? Not very. During the 2014 elections, only 9.5% of eligible Turks living here took part. Austrians must exert themselves to create dialogue with “liberal persons and organizations.”

Appearance of AKP-friendly politicians in Vienna caused a flap when an Austrian Broadcasting Services reporter was excluded.

One thought on “Hostility to Islam makes you a “Nazi””