Yesterday I asked “where are the prosecutions?,” and voila.

The renowned Muslim “reformer” Tariq Ramadan, who has never reformed a thing, appears to be acting upon assumptions that stem from Islamic teachings.

“When I resisted, when I told him to stop, he insulted and humiliated me.”

Now where would Tariq Ramadan have gotten the idea that a woman has no right to refuse sex?

A hadith depicts Muhammad saying: “If a husband calls his wife to his bed [i.e. to have sexual relation] and she refuses and causes him to sleep in anger, the angels will curse her till morning” (Bukhari 4.54.460).

He also is depicted as saying: “By him in Whose Hand lies my life, a woman can not carry out the right of her Lord, till she carries out the right of her husband. And if he asks her to surrender herself [to him for sexual intercourse] she should not refuse him even if she is on a camel’s saddle” (Ibn Majah 1854).

“He slapped me and was outright violent.”

Did Ramadan simply lose control of himself? Maybe? But he also likely believes that a man may beat a woman from whom he “fears disobedience,” as per the Qur’an:

“Men have authority over women because Allah has made the one superior to the other, and because they spend their wealth to maintain them. Good women are obedient. They guard their unseen parts because Allah has guarded them. As for those from whom you fear disobedience, admonish them and send them to beds apart and beat them.” (Qur’an 4:34)

And in a hadith, Muhammad’s child bride Aisha recounts an incident when he hit her. Muhammad “struck me on the chest which caused me pain, and then said: Did you think that Allah and His Apostle would deal unjustly with you?” (Sahih Muslim 2127) 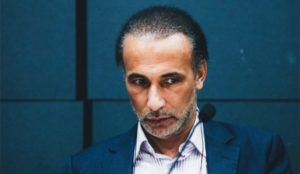 This complaint was filed with the public prosecutor’s office in Rouen, north-west of France for “criminal acts of rape, sexual assault, violence, harassment, threats”, according to AFP.

Henda Ayari, 40, president of the association Libératrices, said on her Facebook page that she has been a victim of something very serious which took place several years ago, but did not want to reveal the name of her attacker because of “threats on his part”….

It turns out that the mentioned – according to her – is Tariq Ramadan, as per explosive claims she made on her Facebook page in recent days.

Ayari has published the book to tell her story of how she decided to abandon the Salafi approach and take off her hijab to live as a “free” Muslim more than a year ago.

Hind said that she followed the 55-year-old Oxford university professor of Contemporary Islamic Studies and listened to his religious and social advice on social media.

In her memoir, Ayari details how her alleged assailant invited her to meet him at a hotel in Paris in 2012, where he was taking part in a conference.

Ramadan gave a lecture aside of the Federation of Islamic Organizations conference in Paris, then invited Ayari to his room in the hotel, she said that he took advantage of her weakness to hug and kiss her. When she refused – as per her story – he slapped her violently.

Her book reads: ‘When I resisted, when I told him to stop, he insulted and humiliated me. He slapped me and was outright violent. I saw someone who was no longer in control of himself. I was scared he would kill me. I wanted to escape but at the same time I couldn’t believe what was happening.

“I started to cry and he said to me: ‘So honey, you’re whining are you? Stop pretending you don’t like it. You didn’t know what a real man was like before. Well, now you do.”…

One thought on ““Muslim Martin Luther” Tariq Ramadan, accused of rape, is detained in Paris”