The Australian political elites are here trying to prepare Australians for the future they envision for them. 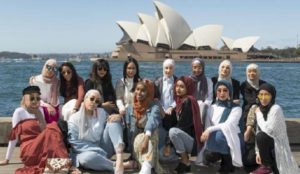 The Department of Foreign Affairs and Trade has been slammed for its decision to sponsor the ‘modest fashion’ industry including the hijab and burqa.

DFAT promoted an Australian-made Islamic clothing exhibition this month, describing the invention of the burqini swimsuit as ‘ground-breaking’.

Yes, if  burqinis are “ground-breaking”. Do they come with a free shovel?

The taxpayer-funded department described the Islamic clothing market as ‘booming’ in Australia.

No such thing. DFAT jerks do that because Muslims get them to make these dumb statements because not to do it would be “racist”, right?

DFAT’s promotion of the industry sparked outrage from the Australian public.

Taking to Twitter in response this week, one man asked: ‘Why are you supporting the oppression of girls and women?’…

Not to worry. The  Turncoat Gubmint will create a new tax for that and for the costs of the beauty pageant.

By the way, the reason this is ground breaking is due to the graves being dug for the following:

1. Women that bring dishonor to the family, as in wearing something not approved by a sharia compliant committee instructing the public as to what is allowable or not.

3. Christians, Buddhists, Hindus, or anyone else, that resists dhimmi status.

4. Any muslim that is not radical enough for the jihad crowd.