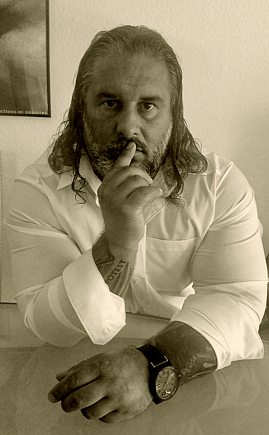 Last summer we posted about Tim Kellner, a former German policeman who was very outspoken against Angela Merkel and the ruin that her policies were (and are) bringing to Germany. Last week we reported on a Syrian “refugee” in Pinneberg who rejoiced after a judge ruled that he could have all his wives and children with him in Germany — one big happy family.

Tim Kellner has initiated legal action against the polygynous “refugee” and the authorities in Pinneberg, and invites other angry Germans to join him in his class-action lawsuit. In the video below, he says that his earlier videos have gone viral, and that he has received a lot of responses.

Anton, who translated the video for subtitling, sends the following introduction:

80% have been young men, predominantly Muslim, who lied their way into Europe and Germany, stealing, attacking, murdering, concealing their true identity, discarding passports, claiming to be asylum seekers in an unprecedented Islamic invasion of the European welfare state and national territories.

With them they bring archaic Arabian and African cultures, where survival of the fittest is demonstrated by their barbaric acts towards women, girls and small boys. Rape, gang-rape, stabbing, violence, torture and murder have exploded since their arrival.

Recently acts of voodoo rituals and cannibalism have yet again shocked Italian society as an 18-year-old girl’s internal organs were removed and eaten by such barbarians. The African perpetrators subsequently chopped her body up and hid it in their luggage.

The Belgium, Germany, France, Denmark and Sweden have seen acts of Muslim terrorism that caused hundreds of deaths, all committed under the auspices of Mad Merkel’s solo decree to transform the peaceful traditional European societies into a multi-ethnic “s***hole” without borders and without nations, spanning Europe, Asia and Africa.

As Sharia — the Islamic legal system — is introduced into Germany against the will of the people, single voices are being raised in a last minute effort to prevent this misogynistic and cruel Bedouin order.

Tim Kellner, a former German policeman, is one of those brave protectors who refuses to cower, submit and look away. He has vehemently defended the European way of life all his career.

He provides instructions on how to file a complaint at the police station and asks that fellow citizens join him in a class-action lawsuit to ensure that all those criminal individuals, authorities and politicians breaking the law and those aiding and abetting them are punished.

He wants to bring them to justice for the irreparable damage being done to his country under the false pretense of “religious tolerance”.