He had already been deported from France and wasn’t supposed to be in Italy, either, but there are just so many such people to keep track of. In any case, he clearly viewed this attempt at vehicular jihad — he crashed his car into the concrete barriers placed in front of the church precisely in order to stop jihad attacks of this kind — as a holy act: “The young Algerian, during the validation hearing, asserted ‘that he was not in a position to know why he had done that except to feel closer to Allah, which would have been made easier by the taking of a drug.’” And: Furthermore, “the arrested during the hearing has continually chanted and recited an Arab litany in the name of Allah.”

No doubt after he serves part or all of his brief sentence, he will become a loyal, stable, productive Italian citizen, no? Celebrate diversity! 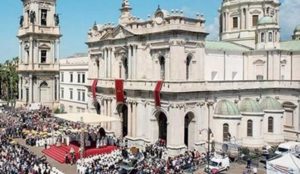 “Algerian drives car towards the Shrine of Pompeii: ‘I did it in the name of Allah,’” translated from “Algerino si lancia con un’auto verso il Santuario di Pompei: «L’ho fatto nel nome di Allah»,” by Titti Beneduce, Corriere Della Serra, March 18, 2018 (thanks to The Religion of Peace):

Investigated for terrorism, he crashed against the barriers placed in front of the church. At the hearing, he played a litany in Arabic. The man is 22 years old: expelled from France and by the police chief of Cagliari, but he was still in our country.

No car ever plows into soldiers by itself. Not unless it is driven by an allahuakbaring Mohammedan savage who wants to kill and die for allah.– World Bulletin

He crossed the street via Bartolo Longo crowded with pedestrians, then crashed against the cement planters arranged to protect the Basilica of Pompeii from terrorist attacks. Othman Jridi, a 22-year-old Algerian, landed in Italy after being expelled from France. He was expelled again by the police chief of Cagliari, but still remained in our country. He was stopped by traffic police after a brief escape. The autocratic judge of Torre, Annunziata Fernanda Iannone — expert on international terrorism and author of a monograph on foreign terrorist fighters — not only validated his detention, but, accepting the request of the prosecutor, also ordered precautionary custody in prison. For the offenses that he was charged with (theft of a car and false statements to a public official), the Algerian was tried quickly: the lawyer who represented him, Enrica Visconti, asked for an abbreviated sentence and therefore, instead of the four-year and one-month sentence requested by the public prosecutor, Jridi was sentenced to two and a half years; a punishment, however, that was very severe compared to the small offenses with which he was charged. The documents were sent to the counter-terrorism pool of the Naples Public Prosecutor’s Office for the necessary details.

The defendant could have been given house arrest (the law allows this for sentences of less than three years), but the judge decided differently: there too many elements to his detriment. First of all, the magistrate argued, we must bear in mind “the extreme danger of the conduct of the arrested person, that due to the methods (invasion of the pedestrian area, a square normally frequented by hundreds of people, as well as by thousands of pilgrims on festive days), the place (the square in front of the shrine of Our Lady of Pompeii), the person (a man of Algerian nationality, illegally on Italian territory, expelled from French territory), physical psychic conditions of the person (who had taken, he admitted, drugs and psychotropic substances), that evoke episodes of terrorist attacks.” Not only that: the young Algerian, during the validation hearing, asserted “that he was not in a position to know why he had done that except to feel closer to Allah, which would have been made easier by the taking of a drug.”

Furthermore, “the arrested during the hearing has continually chanted and recited an Arab litany in the name of Allah”…