2 British IS members say hostage beheadings were a ‘mistake’

Two British members of the Islamic State group who belonged to cell notorious for the beheading of hostages in northern Syria say that revoking their citizenship denies them a fair trial. 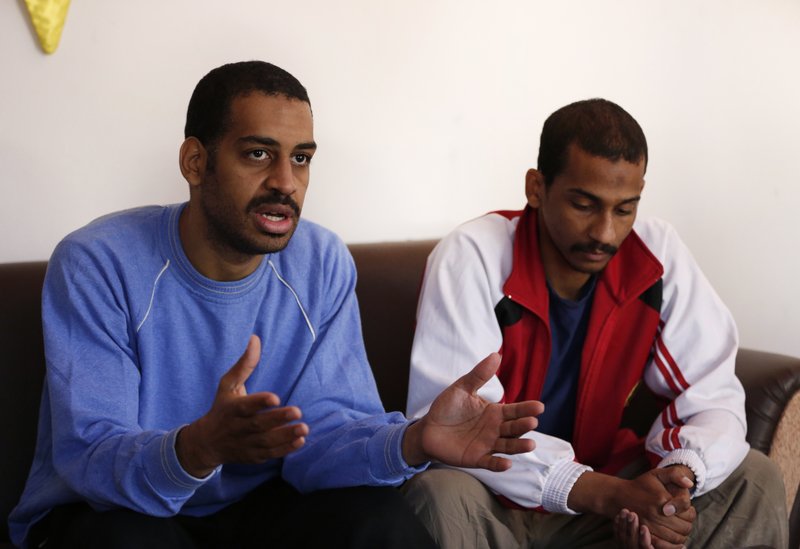 KOBANI, Syria (AP) — Two British militants believed to have been part of an Islamic State group cell notorious for beheading hostages in Syria were unapologetic in their first interview since their capture, denouncing the U.S. and Britain as “hypocrites” who will not give them a fair trial.

The men, along with two other British jihadis, allegedly made up the IS cell nicknamed “The Beatles” by surviving captives because of their English accents.

Torturers & beheaders suddenly care about the concept of a “fair trial”? Cute. They revoked their own citizenship when they joined enemy combatants.–Rita Panahi

The nickname belied the cell’s brutality. In 2014 and 2015, it held more than 20 Western hostages in Syria and tortured many of them. It beheaded seven American, British and Japanese journalists and aid workers and a group of Syrian soldiers, boasting of the butchery in videos released to the world.

Speaking to The Associated Press at a Kurdish security center, the two men, El Shafee Elsheikh and Alexanda Amon Kotey, repeatedly refused to address allegations they were part of the cell — clearly having a future trial in mind. They complained that they could “disappear” after Britain reportedly revoked their citizenship.

They were captured in January in eastern Syria by the Kurdish-led, U.S.-backed Syrian Democratic Forces amid the collapse of IS. Their detention has set off a debate in the U.S. and Europe over how to prosecute their citizens who joined IS — as the Kurds pressure the West to take them back to relieve overcrowding in prisons.

The two said the killings of the captives were a mistake — but for tactical reasons.

Many in IS “would have disagreed” with the killings “on the grounds that there is probably more benefit in them being political prisoners,” Kotey said.

“I didn’t see any benefit (in killing them). It was something that was regrettable.” He also blamed Western governments for failing to negotiate, noting that some hostages were released for ransoms.

Elsheikh said the killings were a “mistake” and might not have been justified. But, he said, they were in retaliation for killings of civilians by the U.S.-led coalition fighting IS. He said the militants shouldn’t have initially threatened to kill the hostages because then they had to go ahead with it or else “your credibility may go.”

The beheadings, often carried out on camera, horrified the world soon after IS took over much of Iraq and Syria in 2014. The group also committed widescale atrocities including massacring thousands of Iraqi troops and civilians and taking sex slaves.

Speaking to the AP on Friday, Foley’s mother, Diane Foley, called on the international community and U.S. government “to have the courage to hold these men accountable in an open trial where we can face them and they can hear all the pain and suffering they’ve inflicted on the world. And so that the rest of the world can understand the atrocity of their crimes.”

She said she opposes the death penalty for them since it feeds jihadi “desire for martyrdom and heroic afterlife.”

“These men do not deserve that. They deserve to be held in solitary confinement for the rest of their lives.”

The leader of the cell, Mohammed Emwazi, was dubbed “Jihadi John” in the British media after he appeared, masked, in the videos, sometimes performing the butchery. He was killed in a U.S.-led coalition drone strike in 2015 in the Syrian city of Raqqa, the de facto IS capital. Another member, Aine Lesley Davis, was arrested in Turkey and convicted there in 2017, sentenced to seven years in prison.

Elsheikh, whose family came to Britain from Sudan when he was a child, was a mechanic from White City in west London.

He traveled to Syria in 2012, initially joining al-Qaida’s branch before moving on to IS, according to the U.S. State Department’s listing of the two men for terrorism sanctions. It said he “earned a reputation for waterboarding, mock executions and crucifixions while serving as an (IS) jailer.”

Kotey, who is of Ghanaian and Greek-Cypriot descent and converted to Islam in his 20s, is from London’s Paddington neighborhood.

Serving in the IS cell as a guard, he “likely engaged in the group’s executions and exceptionally cruel torture methods,” the State Department said. It also said he was an IS recruiter who brought other Britons into the group.

Elsheikh and Kotey spoke to the AP at a Kurdish security building in the town of Kobani, where they were brought, initially in handcuffs and face covers that were removed. They appeared to speak openly with no signs of duress and were friendly with SDF security who came in and out of the room.

They were both initially confrontational but over the interview became more conversational. Kotey often cracked jokes — when asked whether IS leader Abu Bakr al-Baghdadi was alive, he joked that some people thought Elvis never died and Tupac Shakur is still alive. Elsheikh was straightlaced and reserved, referring more often to Islamic texts.

They were unrepentant about belonging to IS — though they said they did not agree with everything it did. Kotey said he did not think suicide bombings were permissible in Islam. Elsheikh said IS’s killing of a captured Jordanian pilot by burning him alive in a cage was “atrocious.”

But they seemed dismissive of the idea that IS was egregious in brutality.

“I am not here to justify or shun every act IS did,” Elsheikh said, arguing that nationals of a country can’t be held responsible for crimes by the state.

They scoffed at the idea that that they were a cell and refused to comment whether they had worked as jailors, had ever seen any hostages or knew Emwazi.

They depicted the allegations as created by media and foreign intelligence — “so the world can say this is the bad guy and kill the bad guy,” Elsheikh said.

They said they had been questioned repeatedly by U.S. military officials and the FBI — daily interrogations for a month, then frequent ones for weeks after.

The U.S. has been pressing for the home countries of foreign jihadis in Iraq and Syria to take their nationals for trial. Britain’s defense secretary has said they should not be allowed back into the country. Former captives of the cell and families of its victims have called on Elsheikh and Kotey to be given a fair trial, whether in the United States or Britain, arguing that locking them away in a a facility like Guantanamo Bay would only fuel further radicalism.

Kurdish officials complain they are being left to deal with the IS legacy, including overburdened prisons full of militants, including foreign fighters whose home countries don’t want to take them back.

Elsheikh and Kotey are held in an undisclosed location. Kotey said he shares a cell with 70 others, all but four of them Syrians, and that they are sleeping like “sardines, literally head to toe, head to toe.” Despite the overcrowding, he said, they get fresh air, play games and have classes.

Kotey said the U.S. and Britain were not upholding their own laws of due process. “Where are they now or are they just applicable when they suit you?” he said. “It just looks very hypocritical, double standards.”

The two denounced as “illegal” the British government’s reported decision in February to strip them of citizenship. The decision was widely reported in British media, though officials have not confirmed or denied it, citing privacy rules.

The revocation exposes them to “rendition and torture,” Elsheikh said.

“When you have these two guys who don’t even have any citizenship …if we just disappear one day, where is my mom going to go and say where is my son,” he said.

“I found it strange that they could actually do that, revoke the citizenship of a person,” Kotey said.

Kotey said the fairest venue for a trial may be the International Criminal Court in The Hague in the Netherlands. “That would be the logical solution.”

Mohammed Hassan in Kobani, Syria contributed to this report.