“I would kill for my religion. Why would I not lie for it?”–Yasser Arafart 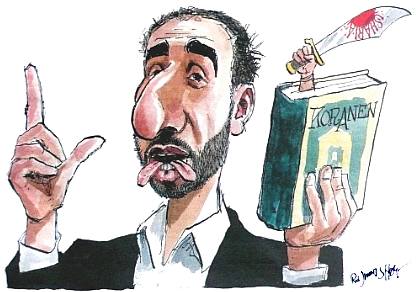 Tariq Ramadan is at present “on leave” from the Qatari-funded Chair of Contemporary Islamic Studies set up for him at Oxford University. He is in detention in France facing charges of rape, brought by former admirers and students.

Ramadan has been a close influence on the UK government. He was a member of the taskforce set up by Tony Blair after 7/7. He was an adviser to David Cameron. He was a member of the Foreign Office’s Advisory Group on Freedom of Religion or Belief, chaired by Tory Baroness Warsi. He is grandson of the Muslim Brotherhood’s founder Hassan al-Banna, of which his father Said Ramadan was a leading light.

The idea of Jihad as Holy War, said Tariq Ramadan recently to a mainly Anglican audience, “is wrong”. He commended his listeners “to struggle for what is better”. “Struggle” (as in “Mein Kampf” — My Struggle) is often used to denote a Muslim’s duty of Jihad.

This old canard is more than an artful dissimulation: it is a lie. Holy War is part of Jihad.

Islamic authorities do not confirm Ramadan’s claim. The Manual of Islamic Law says:

“Jihad means to war against non-Muslims …warfare to establish the religion.”(o9.0).

“Warfare to establish the religion” precisely fits the definition “Holy War”. The Koran, which forms part of Islamic law, states that the duty of war is ongoing, ending only when Islam alone prevails.

“Wage war on non-Muslims and kill them until they submit and Islam is the only governance”, Koran 8:39.

The kind of jihad struggle that Sheik Omar Bakri spoke of was a military one, involving weapons:

Nonie Darwish, a former Muslim who has studied and written on Sharia law, explains (www.JihadWatch.org 26 April 2012):

This is the definition of Jihad, ladies and gentlemen: it is not an inner struggle and it is not self-analysis as they claim it is. In the books of Sharia it is defined as

“warring with non-Muslims to establish the religion”,

and in Al Azhar University …in Cairo… it is taught as

“a permanent war institution against Jews, Christian and Pagan” [sic]”.

Ayatollah Khomeini of Iran leaves no room for doubt about “kafirs”, non-Muslims:

“Jihad stands for killing all kafirs around the world. Push your sword into their bodies, cut them into pieces. …Sword is the key to Allah’s paradise.” (www.islam-watch.org)

Islam teaches that the world is divided into two “abodes”. Muslim lands are Dar al-Islam — the abode of Islam: the other lands, those of the unbelievers, are Dar al-Harb — the abode of War (What The West Needs to Know). “Britain has always been Dar al-Harb”, Anjem Choudary explained to a scowling Stephen Sackur on BBC Newsnight.

This is the “permanent war institution” in which Muslims are obliged, through Jihad, to fight the infidel in order eventually, when strong enough, to make all the world Muslim. Jihad is not optional. Anwar Al-Awlaki, speaking of “our military creed”, made it clear:

The Manual of Islamic Law explains Jihad as “a communal obligation” (o9.1).

Anjem Choudary speaks of Jihad in terms of violence and fighting:

“You can’t say that Islam is a religion of peace, because Islam does not mean peace. Islam means submission. … There is a place for violence in Islam. There is a place for jihad in Islam. …The Koran is full of, you know, jihad and jihad is the most talked about duty in the Koran… Nothing else is mentioned more than the topic of fighting in the Koran.”(islam-watch.org 2 Aug 2010)

“Those who know nothing about Islam pretend that Islam counsels against war. Those people are witless. Islam says: ‘Kill all the unbelievers just as they would kill you all!’ … Islam says: ‘Kill them, put them to the sword and scatter them.’” (www.loganswarning.com)

Moreover, when one examines the real meaning of jihad according to Muhammad from other primary sources such as Bukhari (Hadith, which are oral traditions relating to the words and deeds of Muhammad), the fact is that 97% of the jihad references are about war and 3% are about so-called inner struggle.”

Ramadan’s account of Jihad is at variance with the Islamic sources. It is deliberately misleading. However, delivering to non-Muslims, the “kuffar”, a misleading account of Islam is specifically authorised in Islam: the Manual of Islamic Law has a section headed “Permissible Lying” (r8.2). This is available in the “permanent war institution“ against the kuffar. Religiously sanctioned deception in the cause of Islam has a special name, taqiyya. No shame is attached to employing taqiyya: it is part of being an observant and diligent Muslim. “War is deceit”, said Mohammed, whose example provides the “beautiful pattern [of conduct] to follow” (Koran 33:21). Ramadan is using taqiyya, and being deceptive. Jihad is Holy War, after all. It is not “wrong” to say so.

This is the same Tariq Ramadan who said (to a Muslim audience):

“We are not here to adopt Western values, we are here to colonize the U.S. (and Canada) and spread Islamic sharia law.”

Ramadan, in a book that he co-authored [L’Islam en Questions]…. endorses… everything that Hassan al Banna stands for. Hassan al Banna …wrote a book on violent jihad. Hassan al Banna also justified the use of violence, and specifically used jihad in order to force Islam and to force Sharia principles on any other land… He basically says that once you implement Sharia law the first thing you do is … you replace the Constitution by Sharia. (ditto)

Ramadan’s record of serial lying will not stand him in good stead in his forthcoming trial.

The Manual of Islamic Law, Reliance of the Traveller, is available as a free download (to section V):

Sharia law is set out in the Risala, a free download from archive.org/details/TheRisala.

The Koran may be consulted online.