Authorities are so dishonest about jihad attacks these days that it is impossible to take what they say at face value. Their accounts warrant close examination.

German police put out a brief statement on social media describing the situation as “confusing” and told members of the public: “Please don’t speculate.” A number of people are reported dead after a vehicle was driven into a group of pedestrians in Munster, Germany.

Police say the attack took place in the city’s old town, near the Kiepenkerl statue. They have confirmed the driver of the vehicle shot himself at the scene, and are describing the crash as “deliberate”.

Another suspect, or suspects, may have fled the vehicle after the crash, according to eyewitness accounts.

This is surely fake news:

Local media suggests he was a German national with psychological problems, born in 1969. They have given his name as ‘Jens R.’

If that is true, it would suggest that it is a convert to Islam. That explains the “psychological problems”.

“Terrified diners watched as the driver shot and killed himself inside the vehicle….”

“He is believed to be a middle-aged German man with ‘psychological problems’ and no links to any terrorist organisations.”

When authorities say that he is a “middle-aged German man,” they’re semaphoring that he is not a Muslim. When the establishment media gives the nationality of an unnamed attacker and it’s a traditionally non-Muslim country, we are meant to understand that the attacker is non-Muslim, although interestingly enough, the establishment media also does just the opposite, referring to Muslims, including jihadis, by nationalities they have adopted or pretended to adopt, or their location, despite the fact that jihadis have nothing but disdain for the nation-states of the Infidels, even when they settle in them. Smail Ayad, who murdered two people while screaming “Allahu akbar,” is described as a “Frenchman,” and the BBC recently referred to a Muslim rape gang as “Oxford men.”

In any case, this fellow had “psychological problems,” but there are numerous examples of authorities ascribing what are obvious jihad attacks to “mental illness.” Here are just a few. Also, it is noteworthy that people have always had “psychological problems,” but only lately do they manifest themselves as drivers plowing into crowds of pedestrians. At very least, this man is an imitator of jihadis.

And how did the police find out so quickly that he has “psychological problems”? Did the driver tell them so before he killed himself? Do they have a readily searchable database of everyone who is receiving psychiatric care in Germany?

He also had “no links to any terrorist organisations,” which means he wasn’t carrying an al-Qaeda or ISIS membership card, but authorities routinely ignore the possibility that a Muslim might have been inspired to do violence to unbelievers by calls to do so from al-Qaeda or ISIS, without having any organizational link to a jihad terror group.

“Police are currently searching the driver’s apartment for explosives and also investigating reports that two other people were seen fleeing the van after the crash.”

OK, so he had psychological problems but this wasn’t apparently an instance of him snapping and plowing his car into the pedestrians on the spur of the moment. He was, or might have been, sane enough to amass explosives. And possibly to have had two accomplices.

The plot thickens. What sort of insane person does such a thing? If there were three attackers, did all three have psychological problems?

So in the end, as far as we know now, this is likely not a jihad attack, but given the habitual dishonesty of authorities all over the West, we cannot be entirely sure. 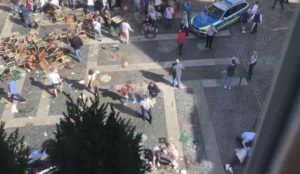 An update on this story. “Three dead after minibus ploughs into diners outside restaurant leaving dozens injured before ‘driver with psychological problems’ shoots himself in front of shocked onlookers in German city,” by Rod Ardehali, Lara Keay, Danyal Hussain and Dianne Apen-Sadler, Mailonline, April 7, 2018