Arrested, tried, and sentenced within an hour: Tommy Robinson gets 13 months for livestreaming outside courthouse

TommyRobinson has been arrested in the UK for “breaching the peace” while reporting on Islamic grooming gangs. This is what happens when a society doesn’t foster a culture of open debate & honesty. This is a stark warning for Australia not to continue down the same path. -PH

Tommy warned us about these rape gangs. You laughed and called him a racist Tommy will die in prison at the hands of these gangs. You will laugh and say it served him right Then you will remember YOU have a daughter.

Tommy Robinson has just been sentenced to jail for 13 months. There is a UK reporting ban. No one there is allowed to talk about it.

This is a death sentence for Tommy. He’s going to be murdered in jail. This has to be stopped. The political class & the judiciary is clearly on the side of the Mohammedan insurgents.

Not only that, but it is very hard to get any information at all, as the police have imposed a gag order regarding this case — obviously they know how bad it makes them look, as the darkness of Sharia-compliant totalitarianism descends upon the UK. Future generations of free Britons, if there are any, will curse the name of Theresa May as the destroyer of free Britain.

Caolan Robertson is saying that this is a death sentence for Tommy because, like Britain First leader Paul Golding, he will likely be placed in the general prison population, which is dominated by violent Muslims who will be quite happy to dispatch Tommy to jahannam.

Britain is finished, and its death as a free society is by its own hand.

Caolin Robertson has now removed the earlier tweet (below) as he has been advised of the reporting restriction.

Caolan Robertson of Rebel Media has just reported from Crown Court Leeds on Twitter.
Tommy Robinson has just been given a 13 month prison sentence starting now for his livestream today. This is a death sentence for tommy. He is going to die in jail. This has to be stopped

Tommy was subject to a suspendend sentence from an earlier matter – this has probably also been invoked, hence the length of sentence…

Here is a puzzle piece that makes sense 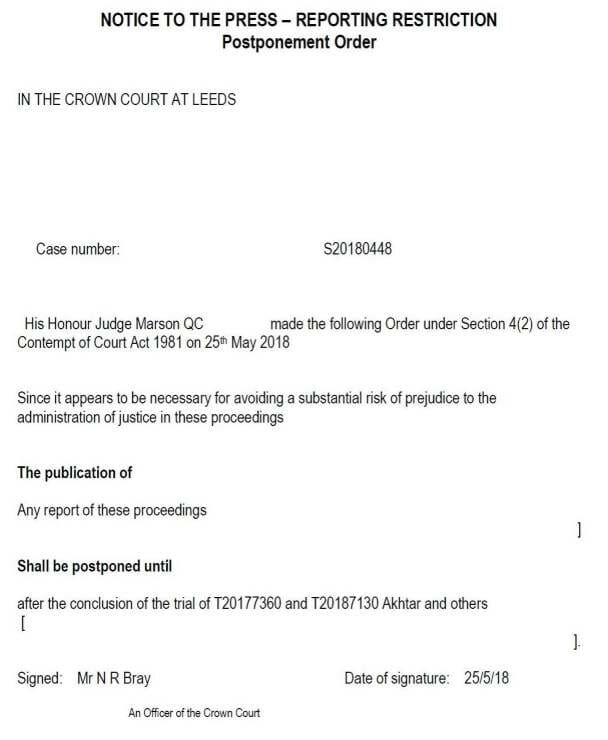