Historical revisionism is designed to influence current policy; Akbar Ahmed’s ongoing whitewashes of Islamic al-Andalus are clearly meant to break down resistance to the mass Muslim migrant influx into Europe today. In this piece, he claims that Abdur Rahman I’s “dynasty more than any other came to represent the idea of pluralist society in Europe.” In reality, as I show in my new book The History of Jihad From Muhammad to ISIS, Muslim Spain was anything but pluralist; it was miserable to live as a Christian there. Christians could never be sure that they would not be harassed. One contemporary account tells of priests being “pelted with rocks and dung” by Muslims while on the way to a cemetery. The dhimmis also suffered severe economic hardship. Paul Alvarus, a ninth- century Christian in Córdoba, complained about the “unbearable tax” that Muslims levied on Christians. Nor could Christians say anything about their lot, because it was proscribed by Islamic law, and criticizing Islam, Muhammad, or the Qur’an in any manner was a death-penalty offense.

In 850, Perfectus, a Christian priest, engaged a group of Muslims in conversation about Islam; his opinion of the conquerors’ religion was not positive. For this, Perfectus was arrested and put to death. Not long thereafter, Joannes, a Christian merchant, was said to have invoked Muhammad’s name in his sales pitch. He was lashed and given a lengthy prison sentence. Christian and Muslim sources contain numerous records of similar incidents in the early part of the tenth century. Around 910, in one of many such episodes, a woman was executed for proclaiming that “Jesus was God and that Muhammad had lied to his followers.”

Akbar Ahmed doesn’t tell you any of that, because if the public knew those facts and others, they wouldn’t favor the policies he wants the West to adopt. Don’t be bamboozled. Preorder The History of Jihad From Muhammad to ISIS by clicking here. 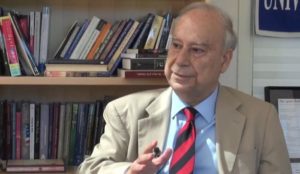 “Abdur Rahman I: The beginning of the glory of Muslim Spain,” by Akbar Ahmed, Daily Times, June 16, 2018

The story of the origin of the greatest of the dynasties of Andalusia, Spain is as fantastic as if it were taken from the pages of The Thousand and One Nights. Abdur Rahman, a dashing young Arab prince, barely escapes with his life from Damascus following a palace coup and massacre, survives hair-raising adventures with a band of soldiers hard on his heels with orders to kill him, and after crossing many lands establishes his rule on another continent, in Cordoba, Spain. These events took place over a thousand years ago and throw light on the encounters between Islam and Christianity and between Europe, Africa, and Asia. There is courage, heartache, pain, defeat, and triumph here, and even in the darkest hours there are characters from all faiths who inspire us today.

When the youthful Abdur Rahman, the lone surviving member of the royal family following the overthrow of the Umayyad dynasty by the Abbasids in AD 750, arrived in al­Andalus, he would have recognised the tribal identity of the groups who dominated it. Indeed, the name al­Andalus—the Arabic name for Iberia—is traditionally thought to be derived from the name of the Germanic tribe, the Vandals, who occupied the region before the Visigoths….

Abdur Rahman’s dynasty would give Europe one of its most glorious periods of history, culminating in the reign of an illustrious successor, Abdur Rahman III, whose Jewish confidant, for all practical purposes, was his chief minister or vizier and whose ambassador to European courts was a Catholic bishop. Perhaps there is nothing more symbolic of that period and its fate than the ruins of Madinatal­Zahra on the outskirts of the city of Cordoba. Built by Abdur Rahman III, it was a glittering town that dazzled visitors. The architecture and town planning were breathtaking, and evidence of it can still be seen today.

The Andalusian model of Convivencia, a pluralist society encouraging acceptance of others and the pursuit of knowledge, art, and literature, persisted for centuries after Cordoba had changed hands. It was evident in different ways and in different kingdoms on the Iberian Peninsula. It was even visible in kingdoms with Christian kings elsewhere in Europe, as in Sicily. Later, the same idea would be evident in the Balkans during the Ottoman Empire. It also had an impact far beyond these areas to shape the very civilization of Europe itself.

Let us look more closely at Abdur Rahman, the man whose dynasty more than any other came to represent the idea of pluralist society in Europe….

Abdur Rahman’s reign lasted thirty­two years, during which he established a dynasty that would be the pride of Europe. It laid the foundations for the Umayyad caliphate of Cordoba that rivaled the other established caliphate in Baghdad, the Abbasids. Its capital, Cordoba, the jewel of al­Andalus, was the most populous and resplendent capital of Europe with parks, palaces, baths, and libraries….