Whatever this French paper claims is a wild guess. Rest assured that there are not one, but many millions of black Africans ready to waltz into Europe if given the slightest chance. 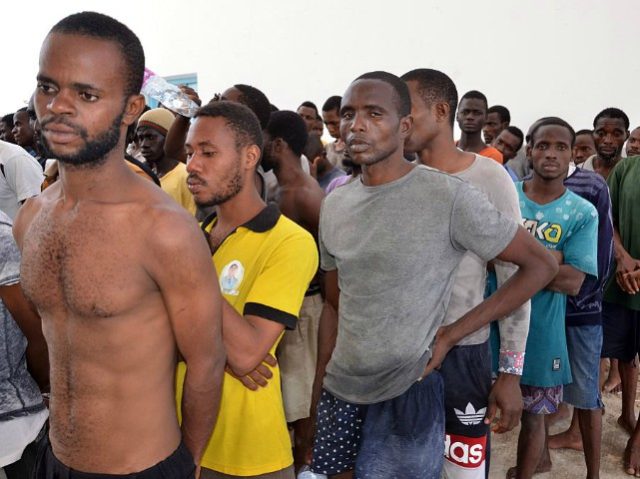 The Libya correspondent for the French newspaper Le Monde has claimed the country could be playing host to as many as 700,000 to one million asylum seekers, with many waiting to come to Europe.

The claims came from journalist Frédéric Bobin who took questions from readers on the current situation in Libya and the status of the migrant crisis which has engulfed the country.

According to Bobin, “across all categories, it is estimated that between 700,000 and 1 million migrants and refugees are present in Libya. That was at least the situation in 2017.”

The journalist added that most of the migrants flowing into Libya who hope to reach Europe used to come primarily from Ethiopia, Eritrea, and Somalia, but now they have been joined by large numbers of migrants from West Africa.

The current Pope is totally down with the NWO. World religious leaders, led by the increasingly anti-Christian Pope Francis, are playing a leading role in this great deception. As the EU’s heads of government gather to discuss policies towards asylum-seekers, migration is causing political turmoil throughout the developed world.

Much as in the first era of globalisation, when the large-scale population movements that marked the period from the middle of the 19th century to the outbreak of World War I provoked fierce reactions, now too countries are moving to reassert control over their borders; but the strains that is inducing threaten to be as destabilising as the population movements themselves.

The continuing crisis in the US is a case in point. The fundamental problem is that Americans hold profoundly inconsistent aspirations. There is strong support for ensuring that those who enter the country illegally, and do not have good grounds for receiving asylum, are detained and deported. However, there is strong opposition to detaining children; so parents could be detained only by separating families. But since that too is strongly opposed, it is hard to see how the parents themselves could be detained.

That contradiction is just a microcosm of those that bedevil American migration policy, going from the fate of the so-called Dreamers to the balance between the skilled and family-reunion intakes. With no resolution in sight, migration will remain a running sore. The US may be capable of muddling through regardless, as it so often does. But an already battered EU is not.

The free movement of people within the union is fundamental to its reason for being; it is, however, hardly likely to survive if countries have vastly different policies on asylum-seekers.

Until recently, the issue seemed to pit the eastern Euro­pean countries, which adopted a tougher stance, against the rest. But the east Europeans were never as isolated as they appeared to be — and now the hardliners form a broad and powerful group, which in addition to Hungary, Poland, Slovakia and Bulgaria includes Italy, Austria, Denmark and Finland.

Vocally opposing them is France; but it is not lost on his European counterparts that Emmanuel Macron’s rhetoric takes hypocrisy to new heights. Under the EU’s September 2015 agreement, France was to resettle about 20,000 refugees from Greece and Italy; it has accepted only 5000. Moreover, it is aggressively seeking to prevent asylum-seekers from crossing into France, including by — allegedly illegally — sending border patrols into Italian territory.

As for Macron’s lectures on Europe’s humanitarian obligations, and the contrast he draws with the Trump administration, they sit uncomfortably with the fact 4500 children are detained in French centres for asylum-seekers. That number has increased fourfold since Macron’s predecessor, Francois Hollande, promised to scrap the detention of children in 2012; and despite six decisions by the European Court of Human Rights condemning France’s treatment of the children of asylum-seekers, Macron has done nothing to reverse the trend.

But however stormy the immediate tensions in the EU may be, they pale compared with those that lie ahead. Sitting across the Mediterranean is a demographic time bomb: on average, each European woman has 1.6 children; in contrast, each woman in sub-Saharan Africa has 4.75 children, with fertility rates in the Sahel and the sub-Saharan savanna ranging from 5.2 children per woman in Burkina Faso to a world record of 7.15 in Niger.

Many of the highest fertility rates — which with rapidly falling death rates translate directly into explosive population growth — are in France’s former colonies, creating migratory pressures made all the more intense by poor economic performance.

That those countries, which are on Europe’s doorstep, are swept by civil conflict and by the spread of radical Islam only worsens the outlook. And it means that the inability of Europe’s leaders to credibly address the looming crisis is sure to harden public attitudes.

When it was founded, Europeans looked to the EU to protect them from overbearing and often inefficient governments; now, as the EU appears to threaten their ability to defend their way of life, they are turning back to national governments as the bulwark of each country’s sovereignty.

With the EU already in tatters, the gathering momentum of movements committed to national sovereignty will make the union’s future very different from its past.

It would be wrong to think Australia has escaped the forces wrenching other high-income nations. Yes, the Coalition has succeeded in bringing boat arrivals under control, after the chaos of the Rudd and Gillard years. However, global instability will continue to fuel the people-smuggling trade, while tougher policies in Europe will divert some of the growing exodus from Africa to our shores.

At the same time, our migration system is struggling to cope as a torrent of appeals against its decisions undermines its effectiveness. Already there is a backlog of almost 22,000 migration cases in the Federal Circuit Court, with some being allocated hearing dates only in late 2020. And there are 38,000 cases pending in the migration division of the Administrative Appeals Tribunal, many of which will go on to further layers of appeals.

With the system stretched to breaking point, its difficulties are merely a symptom of the onslaught the developed countries confront.

Many years ago, Michael Walzer, a great American political theorist and (left-leaning) public intellectual, wrote that “to tear down the walls of the state is not to create a world without walls”; rather, it is to create “a thousand petty fortresses”, as those exposed to a surge in the number of outsiders “organise to defend the local politics and culture against strangers”.

Those fortresses are rising before our eyes. The question is whether they will be fences between good neighbours, or a return to the hatred and distrust that impoverishes, and ultimately destroys, those it pretends to protect.

One thought on “Asylum-seekers shake up European Union and America”