Even that amount is far too little when you consider that Islam is a genocidal ideology.  An ideology that  must manifest its replacement theology by driving us out, or eliminating us in our own countries.

Remember when we were told that Europe needed the migrants to replace its aging work force. This is the reality, along with skyrocketing rates of rape and other crimes, and a massively increased threat of jihad terror. Only “Islamophobes” could possibly object to the paradise thus created. 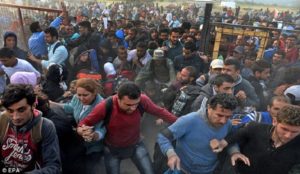 “Non-western asylum seekers to cost Dutch society billions, study shows,” Voice of Europe, June 12, 2018 (thanks to The Religion of Peace):

In contrast to what was told, (Muslim) migrants are far from economically beneficial for society. Research by mathematician Jan van Beek shows that admitting non-western asylum seekers into the country, results in high net costs for Dutch society, WNL reports.

In his research Van Beek tries to make a distinction between asylum seekers and migrants that come to work or study in the Netherlands. He sees a high dependence on benefits in the asylum seeking group.

“You can calculate what people during their lifetimes contribute to government finances and what they receive in benefits and pensions,” van Beek says.

Van Beek’s calculation shows that while the average non-western asylum seeker costs 250,000 euros during his lifetime, the costs become higher by family reunification and getting kids.

The result is that just one asylum seeker could cost Dutch society not 250,000 but 4 x 250,000; because family reunification and children have to be incorporated in the costs for society as well.

“But this is an estimate, it can be much more or less, we have to calculate that. But you have to think in amounts of this order and they are substantial amounts.

Adding the numbers, we see that the Netherlands gives asylum to 131,000 people, of whom a very large majority come from non-western countries like Syria, Afghanistan, Eritrea, Iraq, Iran and Albania.

If we make a conservative estimate we can say 85% are non-western, which means that 111,350 non-western migrants received asylum in the Netherlands.

By multiplying this number by the estimated amounts of Van Beek we land into billions of euros. For example 250,000 (per migrant) x 111,350 is already more than 27 billion….