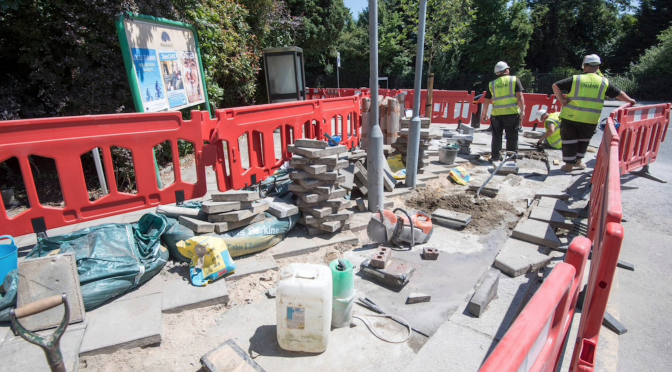 A few updates for the news hounds:

A bomb exploded in Jalalabad, Afghanistan, killing 19 people. The Islamic State claimed responsibility for the attack. The 19 people who were killed were all Sikhs and Hindus, but it is not known whether those minorities were deliberately targeted. (All we know its got nothing to do with Islam).

In other news, African immigrants engaged in violent brawls in a central square of downtown Oslo.

Dozens of new security barriers have been erected at the All England Club to protect next week’s Wimbledon crowds from a vehicle ramming attack, with Scotland Yard warning the terror threat has not gone away.

More than 50 heavy duty steel posts, which are designed to be dismantled at the end of the championships, have been bolted into the pavement on the approach to the grounds in SW19, along the route taken by thousands of spectators each morning and evening.

The waist-high posts are a new feature of the ‘ring of steel’ thrown around the All England Lawn Tennis Club to guard against the nightmare scenario of a vehicle being used to mount pavements and ram innocent tennis fans.

Anti-vehicle barriers have also been laid along the pavement leading to entrances on Church Road and a heavy steel cage lines a section of the pavement at the point where the queues will enter the grounds.

The security of the championships, which open on Monday, remains the chief priority for the police and AELTC, with organisers determined to protect one of the highest profile sporting events in the world against the sort of vehicle attacks seen at Westminster Bridge, London Bridge and Finsbury Park last year, which claimed the lives of 14 people.

There have also been recent vehicle attacks against crowds of pedestrians, with 10 people killed in Canada in April when a man driving a van targeted people in Toronto’s business district.

In October last year an Islamic terrorist drove a rented pickup truck into cyclists and runners along the Hudson River Park’s bike path in New York, killing eight people and injuring eleven others.

Superintendent Jo Edwards, who is taking charge of the Metropolitan Police operation at Wimbledon for the second year running, told The Daily Telegraph: “Driving a vehicle onto the pavement into a crowd is a very simple method of attack which we need to mitigate against as far as we can.”

She added: “The threat hasn’t gone away. We’ve successfully foiled a number of plots during the course of the past year and so we haven’t seen the devastating incidents we saw in 2017, but we are working hard all the time to deter further threats.”

Other security measures at the championships will include ‘queue profiling’, with uniformed police, undercover officers and security staff monitoring the more than 40,000 daily visitors who queue for entry to the grounds for suspicious behaviour.

Bags will be searched and the grounds will be patrolled by armed police, who will operate a shoot-to-kill policy to counter the threat of suicide attacks.

Police remain mindful that the Manchester Arena bomber Salman Abedi detonated his device as they were leaving Ariana Grande’s concert in May last year, killing 22 young fans and parents and injuring dozens of others.

Super. Edwards said tennis fans had been reassured by the presence of armed officers around the grounds during the past two championships.

“We want to deter would be hostile terrorist activity while at the same time reassure the public that we are there to help them enjoy the event,” she said.

The Met has liaised with the intelligence services in the run up to Wimbledon over the possibility of terrorists targeting the tournament.

With thousands of people attending Wimbledon on a daily basis, including dozens of celebrities and VIPs in the Royal Box, the event is one of the most prestigious in the international calendar.

The UK’s terror threat level remains at the second highest level of severe, meaning that an attack is highly likely but not imminent.

The AELTC said: “Throughout the year the AELTC has been working closely with the Metropolitan Police and other relevant organisations to ensure that security measures at The Championships are comprehensive and proportionate to the threat level in the UK.”

Terror experts said Wimbledon needs to maintain a high level of alert in the face of the continued worldwide terror threat.

Tom Wilson, Research Fellow at the Centre on Radicalisation and Terrorism at the Henry Jackson Society, said: “Given that Islamic State have encouraged attacks during the World Cup, it is right to take measures to prevent attacks at other sporting events. Vehicles can be used to inflict terrible casualties during popular events.”