Slovakia on Muslim migrant influx: “We are not prepared to suffer the consequences of the mistakes of others”

Slovakia’s new prime minister backs Hungary against EU and Soros, takes shots at Merkel: “We cannot tolerate a situation in which some countries’ failure to put their houses in order has led to the border having more holes in it than Emmental cheese.” 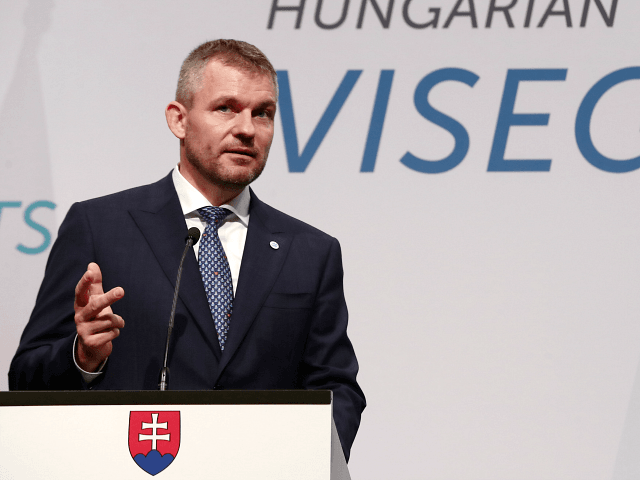 Pellegrini is taking over the presidency of the pro-sovereignty, anti-mass migration Visegrád Group — the Czech Republic, Slovakia, Hungary, and Poland, with Austria participating as something of an adjunct member since the country’s new conservative-nationalist coalition took office — from Mr Orbán.

Speaking during a joint interview on Slovak television, Pellegrini made it clear he would continue the Hungarian leader’s policy of opposition to Brussels redistributing migrantsacross Europe.

“Who may enter Slovakia and whom we let in to live here are issues that the Slovak government will decide on, and we shall not accept someone else from Brussels deciding this for us, or some other country dictating to us on this… it’s our right to decide whom we want or don’t want on our territory,” he asserted.

“I’d like to confirm and repeat Mr Orbán’s words: we are not prepared to suffer the consequences of the mistakes of others.”

Hungarian PM: ‘The Spirit of Marx, Lenin, and the Re-Education Camps’ Lives on in the EU

Pellegrini made it clear who he felt had been making “mistakes” in Europe with a number of thinly-veiled shots at Germany’s embattled chancellor, Angela Merkel.

The EU’s migration policies, he insisted, could not be decided “by one country saying ‘We welcome you, come to us’, without the consent of the other countries” — in clear reference to Merkel’s unilateral decision to open her country’s borders to anyone claiming to be a Syrian refugee, which resulted in a flood of illegal migrants through south-eastern and central Europe.

Pellegrini also thanked Prime Minister Orbán for “having very firmly started the defenceof its southern borders, thereby blocking the transit route for migrants”, saying he was glad that Slovakia’s previous prime minister had sent personnel to assist in Orbán’s border control efforts, “and that at critical times our Slovak reinforcements served here on Hungary’s southern borders”.

“We’re ready to do so again at any time,” he added.

Pellegrini confirmed the Slovak government was sympathetic to Hungary’s new lawsincreasing the financial transparency of foreign-funded NGOs and penalising NGOs which aid and abet illegal migration, many of which are backed by billionaire open borders activist George Soros.

“Naturally, I don’t want to interfere in the affairs of Slovakia, and indeed I cannot, but I advise you to exercise caution,” Orbán warned.

“George Soros is not only active in Hungary, but also in your country. We’re talking about a very dangerous financial speculator, who has made an enormous amount of money from ruining millions of people. He has attacked the currencies of entire countries, and made a great deal of money; money is his God,” he said.

“And George Soros has a very large number of people – hundreds and thousands – on his payroll, whom he pays in one way or another… a great many people are working to guide and influence events… in the direction that he is committed to. This is the reality.”

Pellegrini agreed that NGO transparency in his own country is “inadequate” at present, and warned that if they do not take steps to increase it voluntarily, “Slovakia will also have to initiate changes to force them to reveal the sources of their funding.”

The Slovak leader concluded the interview on a positive note, expressing his relief that the rise of anti-mass migration parties and sentiments in Austria, Italy, and the German state of Bavaria, where the regional sister party of Merkel’s Christian Democratic Union (CDU) is putting the Chancellor under pressure to strengthen the border or face a walkout from her fragile coalition government.

“Thank God that after all these years this problem is beginning to become visible; we should have woken up a long time ago,” Pellegrini said.

“We’re only just beginning to realise that the real priority is defence of the borders, and that we must call a halt to the processes which are underway, otherwise the European Union can harm itself.”