Only 845 cars were torched over the July 14 (Bastille Day) weekend in France. That number is lower than last year’s, but more people were arrested over the weekend than during the same time last year.

In other news, 57 migrants were rescued off the Greek island of Lesvos and safely brought to shore.

Czech Prime Minister Andrej Babiš said that his country would refuse to take in any migrants from Mediterranean “rescues”. He referred to Italy’s request to do so as “the road to hell”. Meanwhile, Croatian Interior Minister Davor Bozinovic said much the same about his country.

In other migration news, Spain rescued 479 migrants over the weekend. Also, Algeria deported 400 migrants, sending them back to Niger.

GAZA, July 15 (Xinhua) — Two Palestinians, a father and his son, were killed and one injured Sunday in an explosion that wrecked their house in western Gaza city, medics and security sources said.

Police reports reveal that Ahmad Hassan is a member of al Aqsa Martyrs Brigades, the armed wing of Fatah movement. The explosion might be a result of a technical mistake while Hassan was preparing a bomb in his house.

Bank robber in burqa attempts robbery of bank in Vienna

The man fled empty handed. The police were unable to apprehend the suspect. A burqa clad robber in sunglasses attempted to rob a bank in Vienna on Friday, Austrian newspaper Kronen Zeitung reports.

According to reports, the would be robber was a man, who entered the bank in Vienna-Floridsdorf during peak hours. 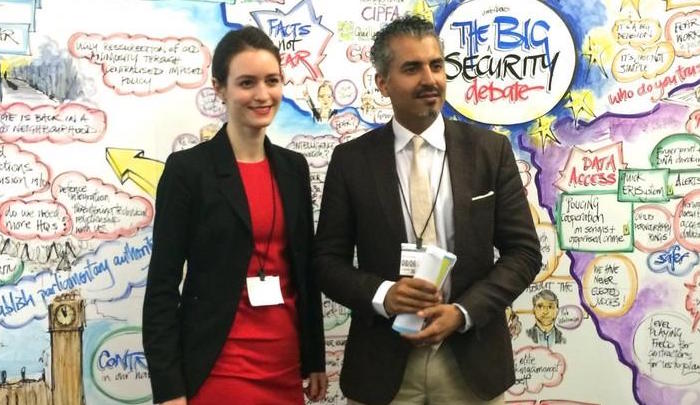 A previous Jihad Watch article detailed the inadequacies as a counter-jihad tool of the Abdullah Xonline animated series produced by the Institute for Strategic Dialogue (ISD). Such failings are part of a wider pattern of ideological incoherence at interrelated Anglo-American “counter-extremism” think tanks such as ISD and Quilliam, which have undeserved reputations for effectively combating jihadism.

Significantly, ISD and Quilliam have, in the latter’s words, the questionable “aim to tackle extremism of all kinds,” as if a single organization could expertly handle disparate ideological threats such as jihadists and white supremacists. ISD has absurdly equated the “damage caused by groups like ISIS and Al Qaeda from the Middle East and resurgent neo-Nazi movements in the West.”  Yet jihadist mayhem and associated sharia civilizational challenges to the West, often state-sponsored, are part of a wider global struggle for freedom that makes whatever stateless groups ISD defines as “neo-Nazi” pale by comparison.

ISD’s 2017 report on “The Fringe Insurgency,” concerning the “extreme right” and associated phenomena such as “Islamophobia,” is indicative of ISD’s sometimes misplaced priorities. The report reveals its leftist bias while discussing “Social Justice Warrior” (SJW), a respectable conservative term that is critical of leftists, like “political correctness.” Nonetheless, the report stigmatizes SJW as a “term used by far- and extreme-right activists to decry socially progressive individuals.”

One of the report’s authors, Julia Ebner, has previously made even more questionable statements condemning counter-jihadists when, like fellow ISD staff members Erin Saltman and Rashad Ali, Ebner worked for Quilliam. She wrote the libelous 2017 Guardian article denouncing “American alt-right leaders Robert Spencer and Pamela Geller” and their outlets “such as Gates of Vienna, the FrontPage Mag and Jihad Watch.” Amidst analogies of “rightwing extremists” with jihadists and even suggestions that the former are more dangerous than the latter, she has also falsely accused English political activist Tommy Robinson of being a “white supremacist.”

Ebner was no exception at Quilliam, as a research intern there wrote in 2013 that “[b]logs like Robert Spencer’s Jihad Watch are flagrantly anti-Muslim, more useful as a means of promoting and selling inflammatory books than anything else.” Accordingly, “Islamist violence is based on misinterpretation of religion and not religion itself, as those at either end of the extremist spectrum, the Ayman al-Zawahiris and Pamela Gellers of the world, would have us believe.” Elaborating on this rose-colored understanding of Islamic doctrine, the intern declared that “most Muslims interpret jihad as a spiritual struggle.” This interpretation minimizes significant Islamic canonical authorities supporting religious violence as manifested throughout history.

Another Quilliam intern in 2013 wrote about the “threat of the global ‘Counter-Jihad’ movement” as examined at a London Hope Not Hate (HNH) conference. Like the Southern Poverty Law Center (SPLC), the leftist HNH has consistently attacked counter-jihad groups such as Jihad Watch, including individuals who brought attention to British Muslim rape gangs. HNH has even coordinated with Antifa groups involved in violence targeting political opponents.

Quilliam’s harsh words for Spencer et al sharply contrast with its support for dubious Islam apologists such as the Iranian-American Reza Aslan, whom Quilliam hosted at a 2009 London roundtable. This multicultural relativist, soi-disant Muslim has made numerous errors of fact and stated many distortions during his Islamic advocacy, including false comparisons between peaceful Israeli orthodox Jews and jihadist fanatics. Meanwhile, his jihadist associations include being a board member of the Islamic Republic of Iran’s American lobby organization, the National Iranian American Council, and praising Iran’s Lebanese proxy militia Hezbollah.

Quilliam’s relationship with Israel in its ongoing defense against jihad is complicated, to say the least. Husain has called for ending the Arab boycott of Israel, and Nawaz has condemned “Israel bashing.” He similarly opposes the Boycott, Divestment, and Sanctions (BDS) movement against Israel as an “inelegant and simplistic solution to a protracted and incredibly complicated problem.”

By contrast, Fraser-Rahim has commended the “vibrant and active activist community that has flourished and [is] leading the way with” BDS. Nawaz has also written that “Israel must remain a secular, democratic state for all citizens, not a Jewish state,” a negation of Zionism’s raison d’être. This analysis ignores the fact that Israel’s Jewish majority seeks acceptance as a “Jewish state” not out of any theocratic impulse but rather in order to legitimate a Jewish national homeland despite continuing Arab rejection.

Husain meanwhile has fantasized about how to “tame Hamas through politics,” as was done with the Irish Republican Army (IRA) previously in the Northern Ireland peace process, especially given thatterrorism is a “decidedly un-Islamic phenomenon.” Contrastingly, British political commentator “Melanie Phillips’s zealotry and ignorance frighten me” with “prejudiced views” about Islam that overlook “Islam’s inherent pluralism.” While he supports a two-state Israel/Palestine peace settlement, he has used an anti-Semitic dog whistle to reject her “Israel First test.”

A recurring theme among Quilliam and its members is unsubstantiated allegations of “Israeli atrocities” during Israeli military actions such as the 2008 Operation Cast Lead campaign against Hamas in the Gaza Strip. A Quilliam press release then denounced “Israel’s killing machine” for “murdering Palestinians en masse.” Husain at the same time wrote of “Israel’s massacre of innocent Palestinians in Gaza,” while suggesting that Britain’s role in Israel’s creation was among British “historical wrongs.”

Nawaz and Quilliam United Kingdom Managing Director Adam Deen continued this trend during Israel’s subsequent 2014 Operation Protective Edge against Hamas. Nawaz decried Israel’s “disproportionate use of force in Gaza.” Meanwhile Deen tweeted the absurdity “‘#hamas use human shields’ Blatant lie” and the question, “How many Palestinian families does Israel need to obliterate to be prosecuted for genocide?”

Quilliam’s clumsy attempts at “impartiality” between Israel and its jihadist enemies only emphasize the organization’s intellectual farrago. Quilliam takes its very name from a rather unreformed 19th-century British convert to Islam, Abdullah Quilliam, who wanted to establish a caliphate and argued that no Muslim could ever aid non-Muslims fighting other Muslims. Yet now Quilliam has decided that Hirsi Ali’s AHA Foundation is an acceptable partner for “reform-minded Muslims,” notwithstanding Husain’s 2007 denunciation.

The flashy appearance of groups such as Quilliam and ISD cannot conceal a dilettantish tendency to superficially occupy politically popular commanding heights. Quilliam and its allies enjoy great appeal with claims of effectively countering jihadists (or, rather, “extremists”). Meanwhile, such groups with the appearance of great sincerity devote equal attention to combating “right-wing extremists” such as Jihad Watch, an effort at evenhandedness that, if nothing else, counteracts charges of “Islamophobia.” A parallel political balancing act occurs between Quilliam’s conditional support for and pillorying of Israel. Yet like ISD’s Abdullah X series, Quilliam’s too-clever-by-half preening has failedto achieve any influence upon Quilliam’s Muslim target audience; non-Muslims should pay less attention as well.