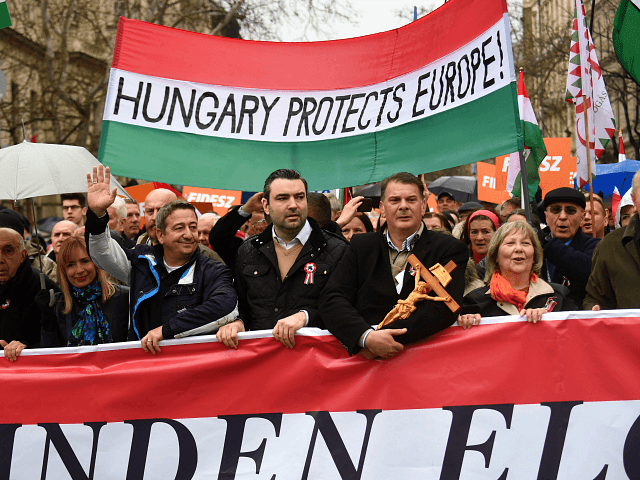 Speaking at an event in the predominantly ethnic Hungarian region of Székely Land in Romania, the Fidesz leader said he was looking forward to the end of the present European Commission led by Jean-Claude Juncker, and to elections to the European Parliament in 2019 — which he predicts will for the first time revolve around one common European issue: mass migration.Orbán said these elections would provide an opportunity to block “the great goal of transforming Europe and moving it towards a post-Christian and post-national era” and hand a heavy defeat to “the elite of ’68” and their liberal democratic system.

“In European politics it is the turn of the anti-communist generation, which has Christian convictions and commitment to the nation,” he declared.

The chief failing of “liberalism”, the Hungarian argued, is its embrace of the ‘open society’ as promoted by billionaire plutocrat George Soros, and its failure to tolerate dissent on the topics of mass migration and multiculturalism.

“Liberal democracy has been transformed into liberal non-democracy,” Orbán argued.

“The situation in the West is that there is liberalism, but there is no democracy… Censorship and restrictions on freedom of speech have become general phenomena,” he observed.

“Working together, political leaders and technology giants filter news items that are uncomfortable for the liberal elite… see the ingenious and cunning means by which they restrict access to negative news reports on migrants, immigrants and related topics… The liberal concept of freedom of opinion has gone so far that liberals see diversity of opinion as important up until the point that they realise, to their shock, that there are opinions which are different from theirs.”

Prime Minister Orbán affirmed his own commitment to what he has repeatedly described — to the horror of mainstream media commentators — as “illiberal” democracy, which unashamedly promotes national identity, rejects mass migration, and embraces the “Christian foundations” of Western civilisation.

“In other words, we Central Europeans claim that there is life beyond globalism, which is not the only path,” he explained.

“In today’s open-society Europe there are no borders; European people can be readily replaced with immigrants; the family has been transformed into an optional, fluid form of cohabitation; the nation, national identity and national pride are seen as negative and obsolete notions… In fact, in liberal Europe being European means nothing at all: it has no direction, and it is simply form devoid of content,” he argued — and declared that Central Europe would instead adopt “Christian democracy” as its model.

“Christian democracy is not about defending religious articles of faith,” the Hungarian leader explained.

“Christian democratic politics means that the ways of life springing from Christian culture must be protected… These include human dignity, the family and the nation – because Christianity does not seek to attain universality through the abolition of nations, but through the preservation of nations.”

Orbán also stressed the importance of the State of Israel to European security in his speech, noting that “without Israel a geographical area of radical Islam would develop, which Europe could only see as a threat.”

Britain is not expected to participate as it is due to formally exit the European Union in March — but this may change.