Spencer requested an explanation, and followed up the next day with a post detailing GoFundMe’s replies. “WePay is unable to process payments related to Hate, violence, racial intolerance, terrorism, the financial exploitation of a crime, or items or activities that encourage, promote, facilitate, or instruct others regarding the same,” said WePay, the company that processes GoFundMe payments. … 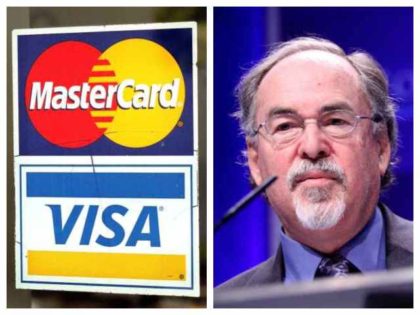 Visa, Mastercard Side with SPLC — Cut Off Service to Horowitz Freedom Center

…and from the Religion of Peace:

LifeSiteNews reported last week that the fundraising service Patreon was removing his account, which he had just set up weeks before to finance a new video studio, claiming Mastercard had forced their hand. A subsequent Daily Beast report revealed that the credit card company had consulted the Southern Poverty Law Center (SPLC) about Spencer, and was driven to do so by the left-wing group Color of Change. Left-wing groups have labeled Spencer a purveyor of “hate” over his forceful critiques of Islamic theology and Muslim extremism.

On August 21, Spencer revealed on his website Jihad Watch that GoFundMe, where he had moved his fundraising efforts after the ordeal, had begun canceling and refunding donations users had made to him without explanation. “We’re sorry, but we have canceled your 08/21 withdrawal of $3,299.42 from WePay Payments,” an email read.

Spencer requested an explanation, and followed up the next day with a post detailingGoFundMe’s replies. “WePay is unable to process payments related to Hate, violence, racial intolerance, terrorism, the financial exploitation of a crime, or items or activities that encourage, promote, facilitate, or instruct others regarding the same,” said WePay, the company that processes GoFundMe payments. “Thank you for understanding and we apologize that we couldn’t offer a better solution.”

“Yes,” Spencer told PJ Media when asked whether GoFundMe’s actions effectively constituted stealing funds from him. “They were pledged to me voluntarily. I have people contacting me now and asking why their donation was refunded, and GoFundMe is having the audacity to say that they have to contact me to find out why.” He added on Twitter that he is currently talking with attorneys to explore whether GoFundMe’s actions can be challenged.

“What amazes me further is that so many people are crowing about this, tweeting happily at me that I’m getting what I deserve for not believing Islam is a religion of peace, and all that,” Spencer wrote. “They don’t seem to realize that a pattern has now been set in motion that could turn on them just as easily as it has turned on me.”

The author marveled at the fact that SPLC’s reputation as an authority on “hate groups” remains unquestioned by major companies even after the organization was forced to make a public apology for making similar claims about another group, Maajid Nawaz’s Quilliam Foundation, as part of a $3.4 million defamation settlement. “But GoFundMe, like Patreon and MasterCard, allow no appeal, no discussion, no questioning of the SPLC’s fiat,” he lamented.

Spencer is only the latest conservative who left-wing activists have gotten banned from or restricted on a wide range of online services and social media platforms. SPLC’s campaigns have gotten the donation processing service Vanco (which is affiliated with Wells Fargo) to cut ties with the Ruth Institute; convinced the charity monitor GuideStar to label 46 conservative organizations, including the Family Research Council (FRC) and the American College of Pediatricians (ACP), as “hate groups,” and gotten Alliance Defending Freedom (ADF) banned from the AmazonSmile charity program.

There is also growing fear among conservatives that censorship campaigns are spreading to services such as Apple, Spotify, and even DNS registrars, making it harder for silenced voices to set up viable alternatives to Facebook, Twitter, and YouTube.

Conservatives are divided on whether and how the federal government should intervene in these areas. Several have suggested that Congress should at least repeal social media companies’ immunity from liability for content they allow on their platforms, which is predicated on platforms being truly neutral and open, rather than exercising editorial judgment over content.

“The authoritarian Left is stamping out all dissenting voices,” Spencer said, predicting that if it continues unchallenged, “people who don’t hold the accepted opinions will not be able to hold jobs, have bank accounts, buy from various outlets, etc. Think this is hysterical and will never happen here? Watch.

“These times call for courage, and yet this is an age of universal cowardice,” he concluded. “It is unlikely to end well.”

3 thoughts on “Censorship getting worse by the day….”