He shouted Allah Akbar. He was known for terror related alerts. ISIS praise him as one of their soldiers. But because two of the women attacked (the ones now dead) were family members the police are claiming ‘domestic violence with mental health problems’ From ITV News France 24 and The Telegraph French …Read More…

The BBC says: “Some reports say the man threatened to kill police and shouted ‘Allahu Akbar’ (‘God is greatest’ in Arabic) before he was shot.”

The Express says: “The perpetrator, who reportedly shouted the Arabic phrase ‘Allahu akbar’ (‘God is greatest’), was then shot dead by police.”

Behind The News says: “While in the house, the Muslim terrorist reportedly shouted to police: ‘allahu akbar, if you come in I’ll blow you up.’”

The Islamic State has claimed the attack. However, there is this: “Two killed, one wounded in knife attack in French town of Trappes,” The National, August 23, 2018

An official from the Paris prosecutor’s office, the office responsible for investigating acts of terror, told The National the stabbing was not an attack motivated by terrorism.

“It’s not an attack. Here in Paris, we are not dealing with it, and that means that it is not terrorism,” the official said.

“[ISIS] can sell whatever they want,” she added, referring to ISIS’s claim of responsibility that it released soon after the attack on its self-styled news agency Amaq.

The French interior minister, Gerard Collomb, said the main had “serious psychiatric problems,” and had been on a terror watchlist since 2016.

“Serious psychiatric problems.” Of course. Don’t they all? It’s part of the global outbreak of mental illness.

And also, in the AP report below: “Police officials said the man was flagged in a government database of suspected religious and political extremists.”

So all in all, it doesn’t appear to be “motivated by calls from the IS leadership to attack civilians in countries at war.” Since the victims were the perpetrator’s mother and sister, it is more likely that it is an honor killing. Either way, it’s more of the wonderful effects of diversity and multiculturalism in France. 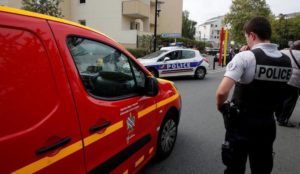 PARIS (AP) — A man flagged by French authorities as a suspected radical killed his mother and sister and seriously injured another woman in a knife attack Thursday that was quickly claimed by the Islamic State group.

Police shot and killed the man. His motives weren’t immediately clear. Authorities didn’t rule out a family dispute and prosecutors were not immediately treating the attack as a terrorism case.

Three French officials identified the two people killed in the attack in Trappes and the mother and sister of the attacker.

The officials spoke on condition of anonymity because they weren’t authorized to give such details publicly. The third victim, a passerby who was gravely injured in the attack, was also a woman, one of the officials said.

The Islamic State group, via its Aamaq news agency, claimed responsibility. The agency said the attack in Trappes was motivated by calls from the IS leadership to attack civilians in countries at war with the extremist group. Hours earlier, IS leader Abu Bakr al-Baghdadi urged followers to attack enemies everywhere by all means, including in knife attacks.

Police officials said the man was flagged in a government database of suspected religious and political extremists. They spoke on condition of anonymity because they weren’t authorized to discuss the investigation publicly.