Macron has no attachment to the magnificent heritage of France. He is the kingpin of the globalist mafia in the European Union.

Why IS President Macron publicly denying his bodyguard is his lover?

Gathered around him his MPs laughed,… (they all seem to be well aware that his “wife” is his beard…)

French President Emmanuel “Toy Boy” Macron has denied that his disgraced bodyguard Alexandre Benalla was his gay lover. Mr. Macron also denied that the bodyguard had access to France’s nuclear codes. Mr. Benalla was recently forced to resign, due to revelations about his scandalous behavior.

French police clashed with rioting, drunken migrants in Calais today; four policemen were wounded. Also in Calais, a group of migrants smashed a car window and attacked the women inside using makeshift weapons.

Believe it or not,  the racist, xenophobic Libyan coast guard picked up 611 migrants in the Mediterranean and returned them to the coast of Libya.

Boat Migrants Down 80% in Populist Italy, up 350% in Socialist Spain 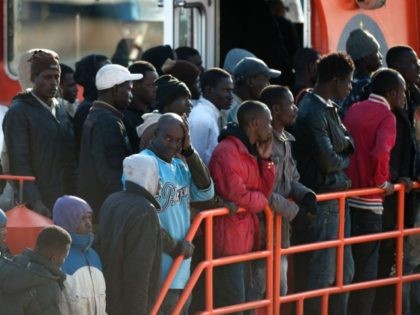 The number of migrant sea arrivals in populist Italy, so far in 2018, is down 80 percent compared to last year, whilst surging by over 350 percent in the same period in socialist Spain.

More on Macron below the fold 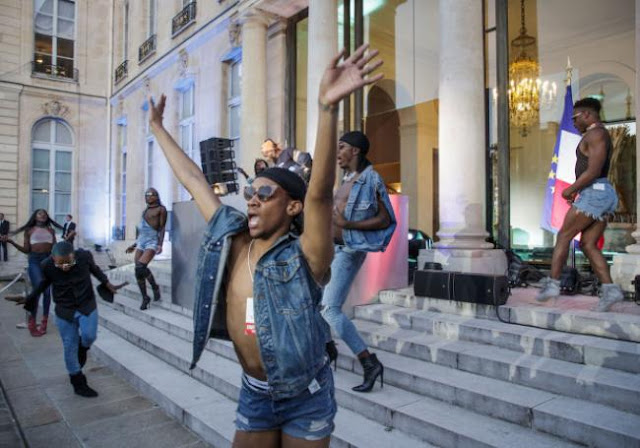 Events in France are overwhelming. Logic dictates that France is on the brink of dissolution. But we know from past experience that France can stay on the brink for a long time unless and until some brain-awakening event pushes the people to reactivate their survival instinct. Eyes wide open they must overcome their fear of being called “nazi, fascist, racist, homophobe, xenophobe, Islamophobe, etc…” or some other cleverly chosen terror-inducing word designed to make the good people of France cower. And let’s hope there are still some good people left in France. Would it be better to go over the brink and disintegrate? Would it be better to set off a civil war in which many innocent people would be killed and probably not many guilty ones? Or is it best to sit it out, wait for Godot, hang in, forever on the brink, banking on the next election to straighten things out?

Macron is shaping up as possibly the worst of the bunch. We thought Chirac was indifferent, Sarkozy a con artist, Hollande a boor, but here we have cold-bloodedness incarnate, ambition in its purest non-cultural form, disembodied, with no attachment to the magnificent heritage of the country he supposedly leads. He is now the kingpin of the globalist mafia in the European Union, as Britain struggles with Brexit, Angela Merkel loses ground, and Matteo Salvini rises, joining Geert Wilders and Victor Orban in their valiant attempt to defuse the coming apocalypse. Marine Le Pen is still in a weakened position because of her inability to speak out with persuasive virulence against Islam and to promote a massive repatriation program of most Muslims from France back to their original homelands. If they are French nationals their citizenship rights must be revoked on grounds they were illegitimately conferred in the first place by governments disloyal to their own nation. The problem is nobody is willing to do this, and furthermore the point may have been passed when a French leader could do what Queen Isabella did when she decreed the removal of all Muslims and Jews from Spanish soil. But Queen Isabella had the support of the Church and today, to my never-ending astonishment, the Church is the Devil’s advocate.

I should add that Macron is a child of his time, an admirer of the lowest elements in society, as is his wife, in view of what happened at Élysée Palace a few weeks ago on June 21. He is infinitely closer in nature to Barack Obama than he is to Donald Trump who nevertheless treats him with inexplicable forbearance.

The incident at Élysée Palace was reported by all major news sources in France, including Le Figaro, and I assume some of you saw reports in the anglo press. It was widely regarded by French patriots as a national disgrace.

Rappers were invited to the presidential residence to celebrate the Fête de la Musique, an annual world-wide event that coincides with the summer solstice. The Fête de la Musique, also called World Music Day, originated in 1976 when an American musician named Joel Cohen proposed the idea to Jack Lang, the French Socialist minister of Culture at the time, a man enamoured of all things post-modern. Every year more than 18,000 concerts by five million amateur singers and musicians take place throughout France. While it is certainly a huge success, it also creates havoc and drunkenness. Numerous countries participate including China, the U.S., Canada, Germany and Colombia. From my point of view it is one more New Age nightmare, but since I have never gone to such an event, perhaps I should remain open-minded.

No amount of open-mindedness can forgive the Macrons for allowing the obscene display of cultural decadence at Élysée:

The featured “artist”, Kiddy Smile, wore a tee-shirt with the words: “Son of immigrants, black and gay” :

Kiddy Smile was born Pierre Hache in or near Rambouillet, France. He was a fashion designer and event planner before becoming a disk jockey. He says he was heavily influenced by black American music such as gospel and hip-hop.

Before his appearance at Élysée he issued this explanation:

“I understand that many people who follow my career might be shocked and concerned by my presence at the Fête de la Musique at Élysée, so I want to explain why I accepted this invitation and what I’m doing. I know what Élysée means in terms of oppression and of the history of the QPOC(POC) and the LGBTQIA+ as well as the repression of migrants but I believe firmly in the high-jacking of power from within, and in the creation of a dialogue where there no longer is any. This invitation to mingle in Macron’s temporary home is for me an opportunity to spread my message: me, a son of immigrants, black, gay.”

The “lyrics” to some of the “songs” included the following threats and obscenities:

“Let’s burn this house down. Let’s burn it completely.”

That is a tiny sampling of the language Macron and his wife were regaled with. From the photos, they enjoyed themselves royally. But many wonder if they have not left themselves open to more obscene innuendos since they expressed no objection to the lewd lowlife jigging like monkeys on the front steps of Elysée Palace. (Monkeys would have been infinitely preferable to these idiots.) If they do not object to such obscenities, people conclude that they approve of them, and Brigitte Macron, in particular, is the potential object of mockery: “Does Brigitte do that to Emmanuel?” As one commentator writes:

– If a spectator watching, as Macron and Brigitte pass by, should exclaim: “Hey, Brigitte, will you l..k mine?”, she would have no moral defense because she has already been exposed to this request and she did not prosecute anyone. On the contrary, she paid the sinister individual to spit that abominable proposition in her face. She must be familiar with that intimate gesture and perhaps she’s reassured to see that her private life is fulfilled.

Note: The writer is clearly implying that during the evening’s festivities Kiddy Smile (or someone similar) actually said that to Brigitte Macron, and she did not object. We must remember that about 25 years ago American news channels were abuzz with graphic gossip about Bill Clinton’s sexual pleasures in the Oval Office with Monica Lewinsky. At the time the French were critical of us for being “puritanical”, an accusation Europeans have always hurled at the U.S. Now the French have to deal with their own immoral president in an incident that, ironically and unfortunately, has American roots. I have said it before – our rotten inner-city culture has captivated the entire world.

Below, the photo seen round the world: 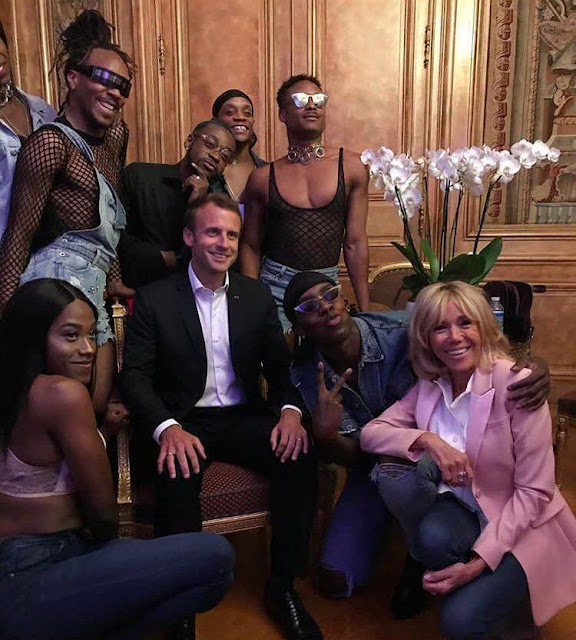 Moreover, several comments from readers analyze Macron as an adolescent, while still others say he is gay (an accusation that was prevalent before his election, then temporarily forgotten.)

The French websites are replete with cries of disbelief at the unprecedented event that suddenly revealed to the people as never before the true character of the man they elected president. (Remember, they had other choices.)

Shortly before the Fête de la Musique Emmanuel Macron made headlines when he reprimanded a 13-year-old boy for addressing him as “Manu”. “Call me Monsieur le President” he chided, and went on at length to set the boy right:

One can’t help wondering what that innocent boy thinks of “Manu” now after the disgrace at Élysée. He certainly learned a lesson on the hypocrisy of a leader he was fond of just a few days earlier.

Another contributor to Boulevard Voltaire is reminded of the end of an historic cycle when the entire Romanov family including their “magnificent children” were executed; of the Roman Empire at its most decadent; and of the film Apocalypse Now:

– Which brings us back to Apocalypse Now. The title alone summarizes our remarks. The film ends on a scene of barbaric festivities in some nightmarish place populated with heads stuck on bamboo piques. The people sacrifice an ox with machetes while the reciter intones, in a sepulchral voice, these two words: “horror… horror.” It’s exactly the word that came to mind while I watched the video of these “dancers”.

Must I remind you that Élysée Palace officially became the residence of the presidents of the Republic in 1879 and therefore constitutes an emblematic patrimonial element of the regime now in office, and that it would behoove its residents, who are supposed to demonstrate a minimum of dignity in consideration for the office, to preserve what should be a permanent base, intangible, of the values of the Republic and, beyond, an important element of French heritage. When you summarily elect an adolescent who dares to devalue the person representing the presidential office, you must be able to make him respect that which transcends his own ephemeral being.

One thought on “Is Macron the French Obama? Or Caligula?”