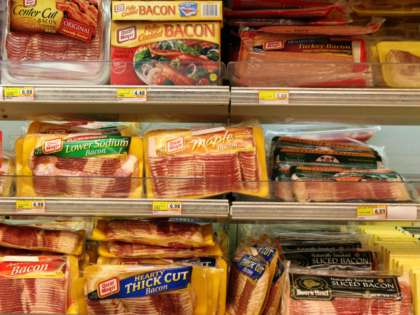 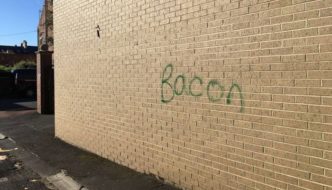 Yes, the person who painted the word “bacon” on the wall of the Heaton Mosque and Islamic Centre is indeed a lout, unless he or she is a Muslim trying to gain coveted victimhood status, as we have seen so many times before. The perpetrator, if found, should be prosecuted for vandalism and made to clean the wall. The reaction in Heaton, however, is a bit overheated. There have been over 30,000 jihad attacks worldwide since 9/11, with a death toll that is even larger. Have the residents of Heaton ever expressed any outrage over that? Of course not, because they have been conditioned for years to believe that such outrage would be “Islamophobic.” 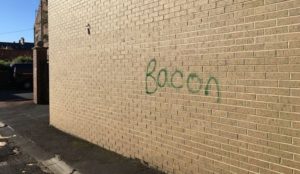 “Fury as ‘bacon’ is scrawled on walls of Newcastle mosque in ‘disgusting’ attack,” by Sean Seddon, ChronicleLive, September 28, 2018:

​A Newcastle mosque has been daubed with graffiti in an act of “disgusting” vandalism.

The word ‘bacon’ was spray-painted in large letters on the side of The Heaton Mosqueand Islamic Centre, located on the corner of Rothbury Terrace and Heaton Road.

The vandalism was discovered by shocked residents on Friday morning.

Eating pork is forbidden under Islamic law, a belief which has previously been used to abuse Muslims….

“I’ve seen racist graffiti in Heaton before unfortunately but as far as I know the mosque has never been targeted in this way.

“It’s disgusting, we don’t want to see this sort of thing round here.”

Councillor John-Paul Stephenson, who represents the Heaton ward, said: “This is an outrageous attack on our community. Heaton is well loved for its diversity.

“This attack goes against everything we stand for. Councillors will be meeting with the mosque to discuss this and offer the support we can.

“Attacks like this will not be tolerated in our community.”

A Northumbria Police spokesman : “No reports have been made to police but we encourage anyone who finds themselves a victim of this sort of crime to get in touch with officers.”