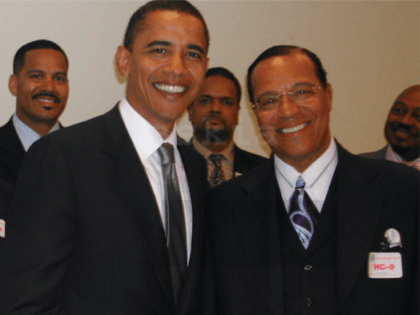 “To the members of the Jewish community that don’t like me, thank you very much for putting my name all over the planet … I’m not mad at you, ’cause you’re so stupid,” Farrakhan said.

“So when they talk about Farrakhan, call me a hater, you know they do, call me an antisemite — stop it! I’m anti-termite! I don’t know nothing about hating somebody because of their religious preference.” 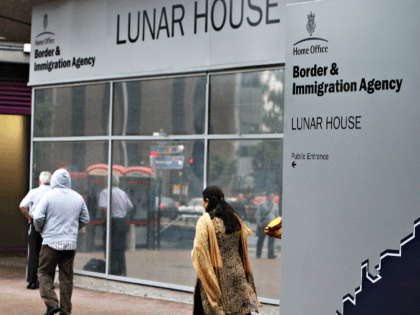 Minister Salvini celebrated the news saying: “Thanks to our actions no NGO ships are in front of Libya, so the smugglers have finished doing their dirty work.”

The man responsible for sending leaflets accusing Islam of plotting to ‘bring England to her knees’ to Muslim family homes has claimed ‘no offence’ was intended.

Six of the hate-filled booklets containing Islamophobic cartoons were sent to Muslim families in hand-addressed envelopes in Preston, Lancs.

Lancashire-based ‘independent Christian’ Michael Davis, who admitted sending the booklets, said around 15 homes in the Blackpool Road area of the city had the leaflets delivered. 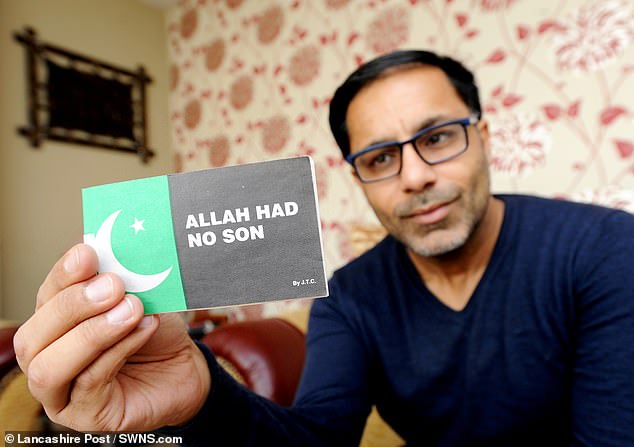 Pav Akhtar, 40, holds one of the hate-filled booklets that was delivered to his house

Lancashire Police have confirmed they are investigating if a hate crime has been committed.

Mr Davis said: ‘They have nothing to worry about – there was no offence intended and there won’t be any more.

‘This was simply a right of reply from Christians – over the summer the Muslims held an event on the Flag Market in Preston and passed out leaflets.

‘There has also been door-to-door canvassing by Muslims in the city, for example at the time of local elections – this was our reaction to that.’

Mr Davis said his group had targeted homes that had previously been seen to display political posters such as local election posters or Brexit material.

The booklets were sent out in handwritten addressed envelopes. 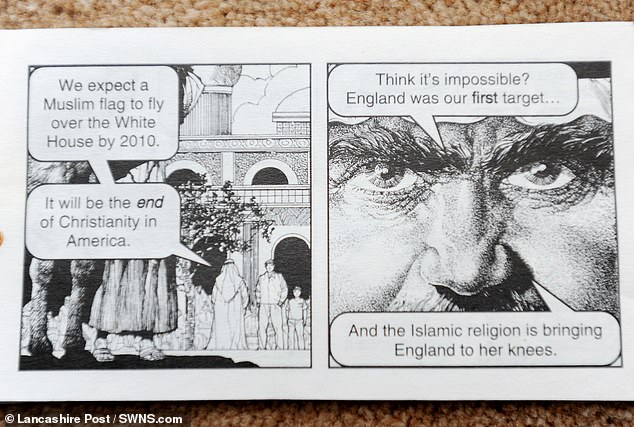 In the cartoon story a father who stands with a mosque in the background tells his son(SIC): ‘They’re praying to their moon god, son’.

The father and son are then threatened by a man wearing an Arab-style headscarf who says (SIC): ‘The holy Koran says I could KILL you for saying that.

‘Islam is the second largest and fastest growing religion in America and you should fear it.’

‘We expect a Muslim flag to fly over the White House by 2010.

‘And the Islamic religion is bringing England to her knees.’ 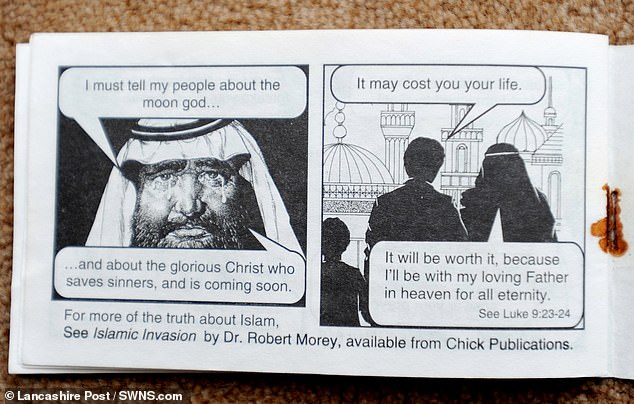 The cartoon then shows one Muslim character converting to Christianity

Pav Akhtar, 40, who was among those who received the booklet, said none of his white or Sikh neighbours had received them.

He said: ‘What was most concerning for us is that each note was a handwritten envelope sent to six specific households – how they know which households to target I couldn’t tell you.’

Pav, who was staying at his mother’s address, said the mail was picked up by his niece and nephew Sehr, 11, and Shahzaib, 10.

He said: ‘The children feel nervous and unsure.

‘They’re asking ‘why do they hate us?’ Why don’t they like us?’ If the idea had been to intimidate us then it achieved that.’

The booklet also contains a section allowing recipients to tick a box ‘yes’ or ‘no’ to accept Christ ‘as your own personal Saviour’. 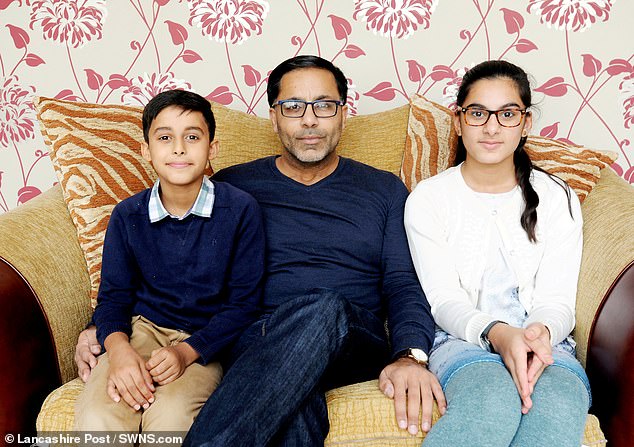 It advises them to pray to Christ in the following way (SIC): ‘Dear God, thank you for showing me what You think about Islam.

Pav, who reported the booklet to the police, said since the Brexit vote he has noticed a change in the attitude within the UK and a spike in hate crime.

‘I’m not blaming the police but there aren’t enough officers – my neighbours are hard-working citizens.

‘We do so much good work. We shouldn’t be treated this way – I was born here and lived here all my life.’ 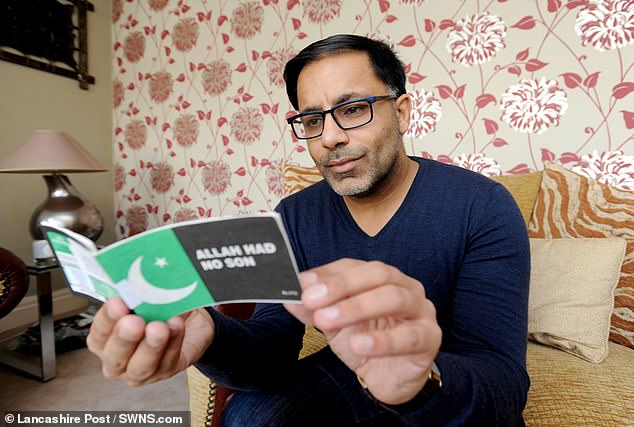 Although Pav is speaking out over the hate mail on principle he is also very frustrated at the lack of response by authorities in addressing the issue.

Pav, a Cambridge graduate and governor at Lancashire Teaching Hospitals NHS Foundation Trust, said ‘People need to speak up and confront it.

‘This kind of behaviour shuts doors rather than opens them.’

As well as reporting the booklet to the police Pav posted the details of it onto Twitter.

However he was immediately labelled a terrorist and met with further abuse and degrading racial slurs.

He duly reported that to the social media company but to no avail.

A response from Twitter stated: ‘We have reviewed your report carefully and found that there was no violation of the Twitter Rules against abusive behaviour.’ 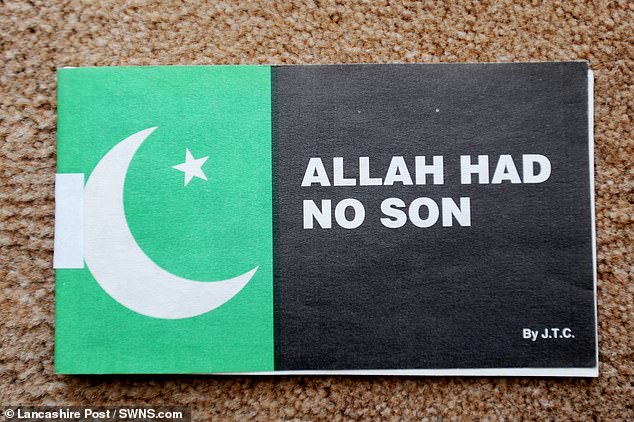 The booklets were hand delivered to six Muslim households in Preston, Lancashire

Incensed at the reply Pav said it was exactly that kind of response which gives victims of hate crime little faith in the purpose and power of reporting such incidents.

He said: ‘Online platforms have a responsibility to step up and take this seriously.

‘What do they have to do for it to be abusive behaviour? ‘People say report it – report it to what effect?’

A spokesman said: ‘Between 10am and noon on October 9, an anti-Islamist book was delivered to an address on Blackpool Road.

‘A further report of the same book being delivered to another address on the street was received on October 12.’

Pav said that since the Brexit vote he has noticed a change in the attitude within the UK and a spike in hate crime.