“Populist” is the dumbest word ever invented. Pope Francis is obviously George Soros’s ‘spiritual advisor’ on white genocide. The implementation of the Kalergi plan is undeniable, since its backed by just about all unelected ‘world bodies’ from the UN to the EUSSR including all of Europes childless ‘leaders’. 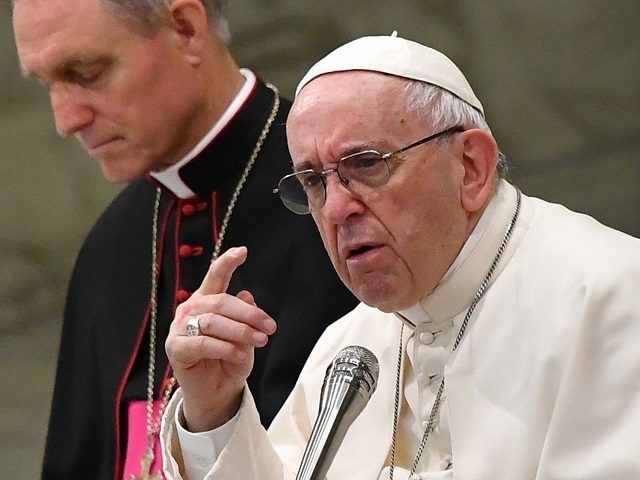 “It is important for young people to know how populism is born,” the pope said Tuesday at a book launch in Rome. “I think of Hitler in the last century, who had promised development for Germany. They should know how populisms begin: by sowing hate. You can’t live sowing hate.”

The pontiff’s words struck hard in a country living under its first elected populist government in decades, formed by a coalition between the progressive, Eurosceptic 5-Star Movement and the pro-sovereignty Lega party.

“Study your history, this is the way the Führer started, with racial purity,” he said. We are now in full World War III fought piecemeal and even religion is deformed to be able to hate better.”

Its the other way ’round. Its communist utopians like this cursed pope who are causing destruction & suicide by denying white Europeans their birthright.

That’s because he is one of them. Francis is most certainly not one of us.

Increased efforts are needed to teach the young about the history of the First and Second World Wars “so they do not fall into the same error and so they know how populism spreads,” he said.

The Pope’s comments came in response to 83-year-old Fiorella Bacherini, an Italian teacher who works with immigrants, who told him that she was concerned about a rise in anti-immigrant sentiment.

Migrants, the pope said, “must be welcomed with an open heart and open doors. Closure is the path to suicide. It is true that migrants must be welcomed, but they must also be accompanied and above all they must be integrated.”

“A government must have an open heart to receive and good structures to assist integration, and also the prudence to say: I can do it up to this point, but no further,” he said.

Accepting migrants, Francis added, “is a biblical mandate. We think of Europe that has been made by migrants, by cultures mixing together.”

Tuesday’s comments represent the pope’s strongest condemnation of populism to date, although his anti-populist message had already been growing more radical.

In January 2017, Francis gave a lengthy interview to the Spanish daily El País in which he was asked whether he was worried about the spread of a populism that capitalizes on “people’s fears,” preaching “a message of hate.”

In his reply, Francis distinguished between a grassroots populism, where it is the people who are “the protagonists,” and a cult of personality where a charismatic figure like Hitler rises to power and is welcomed as a savior figure.

“For me the most typical example of populism in the European sense is the Germany of 1933,” Francis said. After Hindenburg, “Germany tries to get back up, searches for its identity, looks for a leader, someone to give it back its identity and a youngster named Adolf Hitler says, ‘I can do it; I can do it.’”

Whereas the first sort of populism is a good thing, the latter can be very dangerous, he said.

The risk, Francis said at the time, is that in times of crisis we lack judgment and people can begin to think, “Let’s look for a savior who gives us back our identity and let’s defend ourselves with walls, barbed-wire, whatever, from other people that may rob us of our identity.”

The following month, Francis urged Christians to change their attitude regarding immigration, claiming that a failure to welcome migrants is rooted in selfishness and fueled by “populist rhetoric.”

This past summer, following the election of Italy’s populist government, the pope asserted that populism is definitely not the solution to Europe’s immigration crisis.

Asked what he thought the solution was to the immigration crisis that seems to be causing Europe to crumble, the pope answered emphatically.

“Populism is not the solution,” he said, adding that Europe would disappear without migrants because no one is having children.

Much could be said about this nonsense, but I digress.

The redoubtable Cardinal Joseph Zen said Thursday that the recently inked deal between the Vatican and China over the naming of bishops spells the “annihilation” of the Church in China.

In an op-ed for the New York Times titled “The Pope Doesn’t Understand China,” Cardinal Zen — the retired bishop of Hong Kong — speculated that the new deal, which concedes an unspecified role in the appointment of bishops to the Chinese Communist Party (CCP), is fruit of the naivete of Pope Francis.

“Francis may have natural sympathy for Communists because for him, they are the persecuted,” Zen wrote. “He doesn’t know them as the persecutors they become once in power, like the Communists in China.”

And while supporters of the accord say that it brings unity after longstanding division between the underground Church loyal to the pope and the “official” church approved by the Chinese authorities, in reality it is “a major step toward the annihilation of the real Church in China,” Zen said.
.

“Pope Francis, an Argentine, doesn’t seem to understand the Communists,” Zen added, perhaps because of his experience in South America he sees them as defenders of the poor against oppressors.

The cardinal recalled that after China severed relations with the Vatican in the 1950s, Catholics and other believers were arrested and sent to labor camps.

“I went back to China in 1974 during the Cultural Revolution; the situation was terrible beyond imagination. A whole nation under slavery. We forget these things too easily,” Zen said.

“We also forget that you can never have a truly good agreement with a totalitarian regime,” he said.

The beginning of the end, he proposed, was when Slovak Cardinal Jozef Tomko “who understood communism” was replaced in 2002 by a “young Italian with no foreign experience” in overseeing the Church’s international missionary work.

In the face of recent experience, the cardinal said he has revised his earlier opinions regarding the pope’s choices of aides.

“I was among those who applauded Francis’s decision to appoint Pietro Parolin as secretary of state in 2013,” he said. “But I now think that Cardinal Parolin cares less about the Church than about diplomatic success. His ultimate goal is the restoration of formal relations between the Vatican and Beijing.”

Zen also likened China to the situation in Cuba, where a Francis visit in 2015 accomplished little besides media hype.

“But what did Francis’s visit to Cuba in 2015 bring the Church? The Cuban people? Almost nothing. And did he convert the Castro brothers?” Zen asks rhetorically.

What the new accord will actually achieve, Zen warns, is the suppression of the good bishops of the underground Church who are faithful to Rome

Zen said that if he were a cartoonist he would “draw the Holy Father on his knees offering the keys of the kingdom of heaven to President Xi Jinping and saying, ‘Please recognize me as the pope.’”

The cardinal ends his essay with an appeal to the underground bishops and priests of China, asking them not to start a revolution, which would only mean their ruin.

“Go home, and pray with your family,” he said. “Till the soil. Wait for better times. Go back to the catacombs. Communism isn’t eternal.”