What criteria does someone need to meet in order to convince the French Interior Minister he’s a jihadi? If yelling the supremacist battle cry ‘Allahu Akbar,’ being on a watch list, having a criminal history, opening fire in a public space doesn’t cut it, what does?

Cherif Chekatt reminds Emmanuel Macron that climate change is not the only threat France faces. My latest in FrontPage: 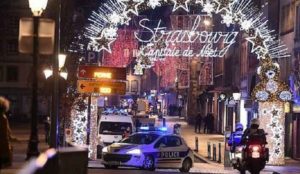 Emmanuel Macron, France’s youthful wunderkind, Europe’s poster child for globalism and socialism, has been absorbed lately with furious protests and riots over a confiscatory new tax he placed on gasoline in order to fight what he thinks of as the greatest threat France and the world face today: climate change. But on Tuesday in Strasbourg, a Muslim named Cherif Chekatt reminded Macron that France faces another threat, one that could prove to be immensely more serious: jihad. Chekatt opened fire at a Christmas market in his native Strasbourg, murdering four and injuring eleven.

As of this writing, Chekatt is on the run, and in a departure from the recent tendency to wave away all such attacks as manifestations of “mental illness” and insist that they’re not terrorism, much less jihad, French authorities are, according to the Telegraph, “treating the attack as a terrorist act. Anti-terrorist prosecutors have opened an investigation.”

The Islamic State (ISIS) years ago announced its intention to mount so many jihad attacks that Western law enforcement and intelligence agencies would not be able to keep up with them all, and would collapse. They’re well on their way to attaining their goal.

In fact, Chekatt was “on a list of ‘security threats,’” France’s “Fiche S” list of people who pose a serious terror threat. RT reported that the regional prefecture announced: “The author of these acts, listed as a security threat, had been sought by police” on Tuesday, but they hadn’t been able to catch up with him before he opened fire. A former London police inspector, Peter Kirkham, explained to RT: “There are so many people that are involved around the edges of this sort of terrorism if this is what it turns out to be, that you can’t keep any sort of meaningful surveillance on them. Even just monitoring the use of communications and social media would be too much.”

And that’s especially true when, like Macron, you don’t want to admit that there is any significant threat at all. But it is also a situation that the Islamic State (ISIS) has been working actively to bring about. As I explain in detail in my book The Complete Infidel’s Guide to ISIS, in 2015 the Islamic State (ISIS) published Black Flags from Rome, detailing its strategy for conquering Europe. It explains how, as the Muslim population of Europe increases, intelligence agencies collect huge amounts of data, “but they will not study it unless you are caught under the radar.” As jihad attacks become more common, law enforcement authorities will not be able to keep up:

As the Western nations get poorer, their intelligence collection agencies will continue to exist, but they simply won’t have enough manpower (less jobs) to analyse it all. With less attacks in the West being group (networked) attacks and an increasing amount of lone-wolf attacks, it will be more difficult for intelligence agencies to stop an increasing amount of violence and chaos from spreading in the West.

As this violence and chaos spreads, Leftist non-Muslim Europeans will help pave the way for the Islamic conquest of Europe, for

a growing population of left-winged [sic] activists (people who are against; human/animal abuses, Zionism, and Austerity measures etc) look upto [sic] the Muslims as a force who are strong enough to fight against the injustices of the world….Many of these people (who are sometimes part of Anonymous and Anarchy movements) will ally with the Muslims to fight against the neo-Nazis’ and rich politicians. They will give intelligence, share weapons and do undercover work for the Muslims to pave the way for the conquest of Rome.

When will this alliance be cemented? When, sooner or later, Leftist protesters realize that taking up arms alongside Muslims is the only viable way of achieving their goals:

If you have ever been at a pro-Palestine / anti-Israel protest, you will see many activists who are not even Muslims who are supportive of what Muslims are calling for (the fall of Zionism). It is most likely here that connections between Muslims and Left-wing activists will be made, and a portion from them will realise that protests are not effective, and that armed combat is the alternative. So they will start to work together in small cells of groups to fight and sabotage against the ‘financial elite’.

Three years later, this plan is working beautifully. And so Cherif Chekatt will fade quickly from the headlines, and the jihad threat will again be downplayed, until the next one. Meanwhile, watch in the coming days for the handwringing establishment media stories about how the local mosque in Strasbourg fears a “backlash,” and that Muslims are the real victims of jihad terror attacks. It always works the same way, like clockwork. That is, until the day that it doesn’t. One day soon the disingenuousness and cynicism of this establishment media propaganda will be obvious to everyone. But by then it will likely be far too late for Emmanuel Macron, and France.

Obviously, a rat born in a stable is not a horse.

Initial reports that he was a migrant were apparently incorrect; this Reuters report says Cherif Chekatt was born in Strasbourg. Now authorities should be asking why and how he learned to hate his native land to the extent that he carried out this jihad attack. But they almost certainly won’t. 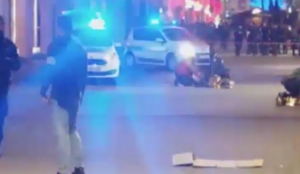 STRASBOURG, France (Reuters) – A gunman on a security watchlist killed at least two people and wounded at least 11 others near the picturesque Christmas market in the historic French city of Strasbourg on Tuesday evening before fleeing.
The aftermath of a shooting is seen in Strasbourg, France December 11, 2018 in this still image taken from a video obtained from social media. TWITTER/@CMM_NOTICIAS/@MARIOSAAVEDRA/via REUTERS

With France still on high alert after a wave of attacks commissioned or inspired by Islamic State militants since early 2015, the counter-terrorism prosecutor opened an investigation.

Amid fast-moving, confusing scenes it was not clear if the suspect, identified by police as Strasbourg-born Chekatt Cherif, 29, had been cornered by commandos or had slipped the dragnet.

Medics at the scene and police sources told journalists four people had been killed. But in a statement at 2215 GMT, the local prefecture was still saying two people had died.

The attack began at about 8 p.m. (1900 GMT) as stallholders prepared to close down and the city’s restaurants filled up. Bystanders were swiftly ushered into nearby shops.

“There was confusion initially but they locked the front doors pretty soon after the gunshots,” said U.S. citizen Elizabeth Osterwisch, who was sheltering on the top floor of the Galeries Lafayette department store. “They moved us several times, eventually settling on the place with the most protection.”

“From my hotel window I saw passers-by dragging someone who was injured and onlookers panicking,” he tweeted. “Soldiers and police have cordoned off the area. We’re being told to stay in the hotel.”
MANHUNT

A source close to the operation said the suspect had been cornered and shots had been fired. But an hour or so later, a police source said he was still on the run….