The pope lamented the “absence of various Governments at the recent United Nations Conference in Marrakesh,” referring to nations such as Israel, Italy, Hungary, the United States, Australia, Switzerland, and Poland that chose to sit the meeting out. Pope Francis called on the leaders of nations Monday to lend assistance to migrants and refugees who have left their homelands for any reason and to help them integrate into their new homes.

Migrants and refuges are “among the weak of our time that the international community is called to defend,” the pope said in his annual address to the diplomatic corps accredited by the Holy See.

The pope launched an appeal to government leaders to “give assistance to those who have emigrated due to the scourge of poverty, any sort of violence and persecution, as well as natural disasters and climatic disturbances, and to facilitate measures that allow their social integration in their host countries.”

NincomPope Frances is a minion of Satan. He is the enemy of freedom, liberty and civilisation.

“Remove mutual relations from the logic of oppression that leads to war.”

Pretentious, asinine, word-salad nonsense.  What is he trying to say here?  Incomprehensible.

What  is fair about an unelected bureaucracy imposing rule on us anti-democratically?

This pope is a dangerous lunatic. 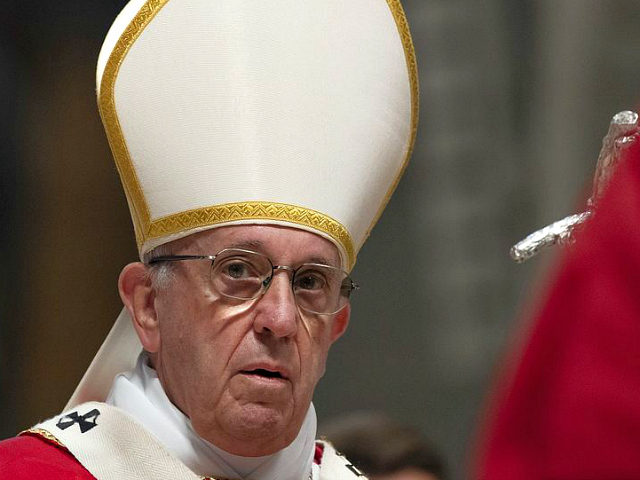 Pope Francis compared today’s emergence of populist and nationalist movements to the days of Nazi Germany in an address to a group of diplomats accredited to the Holy See Monday.

The upcoming year will mark the 100th anniversary of the establishment of the League of Nations, the pope said in his annual address, which represented “the beginning of modern multilateral diplomacy, by which states try to remove mutual relations from the logic of oppression that leads to war.”

Difficulties with the League of Nations led exactly twenty years after its birth to “a new and more lacerating conflict, which was the Second World War.”

“Where even one of these elements fails, the search for unilateral solutions prevails and, ultimately, the overwhelming of the weaker by the stronger,” he said, and unfortunately, “we note that the same attitudes are still undermining the stability of the main international organizations.”

The pope went on to put forward his belief that globalist organizations are key to the maintenance of peace and international stability.

I consider it important that “even in the present time the will of a peaceful and constructive confrontation between the States does not fail,” he said, “even though it is evident that relations within the international community, and the multilateral system as a whole, are going through difficult times, with the re-emergence of nationalistic tendencies.”

These tendencies “undermine the vocation of international organizations to be a space for dialogue and meeting for all countries,” he said.

The rise of populism, the pope suggested, is partly due to the inability of the multilateral system to offer effective solutions to unresolved situations, and in part it “is the result of the evolution of national policies, more and more frequently determined by the search for an immediate and sectarian consensus, rather than by the patient pursuit of the common good.”

It is also partly due to an attempt on the part of multinational organizations to “impose their visions and ideas, triggering new forms of ideological colonization, not infrequently disrespectful of the identity, dignity, and sensitivity of peoples,” he said.

During the period between the two world wars, he said, “populist and nationalistic propensities prevailed over the action of the League of Nations. The reappearance of such impulses today is progressively weakening the multilateral system, with the result of a general lack of confidence, a crisis of credibility of international politics and a progressive marginalization of the most vulnerable members of the family of nations.”

In his address, the pope lamented the “re-emergence of tendencies to pursue and prioritize individual national interests without resorting to those instruments that international law provides to resolve disputes and ensure respect for justice, including through international courts.”

This rise in nationalism is in cases the result of a “heightened malaise” that is experienced by the citizens of many countries, who perceive the dynamics that govern the international community as “ultimately far from their actual needs,” he said.

Curiously, nowhere in his 5,600-word speech did the pope mention “subsidiarity,” the central principle of Catholic social thought that protects the freedom of individuals, families, and communities from the interference of state and international bodies.

The Catholic Church has consistently reaffirmed the vital principle of subsidiarity, which determines that “a community of a higher order should not interfere in the internal life of a community of a lower order, depriving the latter of its functions, but rather should support it in case of need and help to co-ordinate its activity with the activities of the rest of society, always with a view to the common good.”

As a result, Catholics believe that international bodies should never be all-encompassing or invasive regarding the internal life of nations but should limited their activity to areas of life that cannot practically and effectively be governed by the nations themselves.

The sovereignty of nations should never be compromised by overly aggressive international legal or political structures. Importantly, according to Catholic thought, subsidiarity is a fundamental component of the common good and not a counterbalance to it, and where it is disrespected, the common good suffers.

“Epiphany is the religious feast day celebrated by millions of Christians around the world on January 6. As is usual on the holy day, Pope Francis gave a mass to 60,000 people in St Peter’s Basilica, Rome.”

Unfortunately, Pope Francis decided that he would use his powerful role once again to force the political agenda of globalism and wide-open borders upon the flock. He delivered a brazen appeal:

“I make a heartfelt appeal to European leaders to show concrete solidarity for these people.”

He claimed that migrants were only “seeking a safe port where they can disembark.” This simply isn’t true. The UK’s Home Secretary Sajid Javid, for example, “is set to tighten rules on migrants who continue to ‘asylum shop’ and exploit Britain’s generous immigration system by travelling through other safe countries in Europe to the UK.”

The Pope remains safely “walled up” at the Vatican surrounded by guards while he appeals to Europe to fling open their doors to illegal migrants.

The Pope has abandoned his responsibility to guide the Catholic Church and has made himself into a puppet for the globalist cause. His statements are increasingly bizarre. He has called gossipers “terrorists,” but but not Islamic jihadis. He has also compared illegal migrants to Jesus, while a Vatican official said that the hunted Christian Asia Bibi was an “internal matter” of Pakistan. Pope Francis even called Christians who were murdered by Muslims in Algeria a “testament to God’s plan for a peaceful coexistence of Christians and Muslims.”

POPE Francis has used Epiphany 2019 to launch a “heartfelt appeal” to European leaders following an escalating migrant dispute – here is what you need to know.

Epiphany is the religious feast day celebrated by millions of Christians around the world on January 6. As is usual on the holy day, Pope Francis gave a mass to 60,000 people in St Peter’s Basilica, Rome. But the Catholic leader also used his platform to wade into an international diplomatic row about migrants trying to enter European waters. The dispute between Catholic nations Italy and Malta centres around 49 migrants rescued by German humanitarian group Sea-Watch 3.

The passengers were plucked from two unsafe vessels travelling out of Libya on December 22 and December 29.

Both Italy and Malta have refused entry to both groups, one of which includes three small children and four children.

Now, Pope Francis has intervened, making his views heard on one of the biggest religious festivals of the year.

Addressing his comments to St Peter’s Square on Sunday, Pope Francis said: “I make a heartfelt appeal to European leaders to show concrete solidarity for these people.”

The Pope added the migrants concerned were only “seeking a safe port where they can disembark”…..