Philippines: UK and Australia issue warnings about travel to Mindanao over threat of jihad terror and kidnapping

The UK and Australia have issued warnings against citizens traveling “to some parts of Mindanao because of terrorist activity and kidnapping….The travel warning followed the blast in Cotabato City” on New Year’s Eve, “which killed two and injured dozens.” The threat in the Philippines, however, is not restricted solely to this one area. The jihad battle for territory, including the murders and kidnapping of infidels and fellow Muslims, is ongoing in that nation.

Reporting on Islamic jihad activity worldwide results in charges of “Islamophobia,” “racism” and the like. It does not seem to occur to many political leaders and mainstream media journalists — who seem to be plagued with a perpetual long-term memory deficit — that the daily news items filling Jihad Watch are factual. But their actions sometimes betray that they know this to be ths case. Here we see the UK — the country that allows Sharia courts to operate and has flung open its doors to unvetted Muslim migration, while banning and defaming counter-jihadists and allowing jihadists to enter and preach freely — is issuing a warning about jihad activity in another country.

Malacañan Palace (where Philippines President Rodrigo Duterte lives) decided to lie about the UK and Australian government warnings, and issued its own statement claiming that travel to Mindanao and other parts of the Philippines is  “very safe.”

This lie is as brazen as ones we constantly hear about the benefit of wide-open borders.

Here’s a glimpse of the upheaval going on in the Philippines: “The Philippine Congress” vowed to “fast-track a long-delayed bill establishing self-rule for Muslims in the southern island of Mindanao, in response to President Rodrigo Duterte’s warning that another war could break out if the legislation collapses.” This has led to Islamic turf battles. In a July followup to Duterte’s vision of Muslim self-rule, “a bomb exploded in a van in the restive southern Philippines…killing 11 people at a military checkpoint,” in a suicide attack for which the Islamic State claimed responsibility. The blast was in a “island stronghold” of the jihadist group Abu Sayyaf. One month later, a report out of Singaporewarned  “that the war on terror in the Philippines may be entering a new, deadlier phase that security forces may not be ready for.” 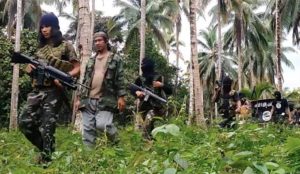 MANILA – After the United Kingdom, Australia on Tuesday warned its citizens against traveling to some parts of Mindanao because of terrorist activity and kidnapping.

Australia’s Department of Foreign Affairs and Trade advised its citizens to avoid travel to central and western Mindanao, including the Zamboanga Peninsula, and the Sulu archipelago and southern Sulu Sea area.

It also advised citizens to reconsider travel to eastern Mindanao and exercise a “high degree of caution” when traveling to the Philippines.

The travel warning followed the blast in Cotabato City on Dec. 31, which killed two and injured dozens…..

3 thoughts on “Stay away from Mindanao!”