The latest from GoV:

According to the migrant-helping organization Doctors Without Borders, more than a hundred immigrants picked up in the Mediterranean were “forcibly returned” to Libya. A spokesman for the Libyan coast guard disagreed, saying that the migrants were simply rescued.

In other news, the embattled Venezuelan dictator Nicolas Maduro has closed his country’s border with Brazil.

Only Satan Would Accuse His Church, Really?

Those who spend their time accusing the Church show themselves to be friends and family of the devil, Pope Francis said Wednesday.

The “fashion” today is to destroy the Church with words, the pope said on the eve of the Vatican summit on clerical sex abuse, but this does not come from God but from the devil.

[Comment: Accusing the other of that which he does, consort with globalists who carry water for the devil.]

Hungarian Govt: ISIS Jihadists Returning to EU ‘By the Hundreds’, ‘This Must be Stopped’

Hungarian foreign minister Péter Szijjartó has warned that the European Union is pushing for more immigration at a time when radical Islamic extremists are returning from the ruins of the Islamic State caliphate “by the hundreds”, and this “must be stopped”.

Because Islam is, after all, a religion of peace.

‘Ilhan Omar is waging an unholy war against the Jewish people’:

The poisonous hate is impossible to purge. It’s a cancer of the soul.

Will they close all the mosques preaching authentic Islamic texts and teachings?

By JENNIFER SMITH FOR DAILYMAIL.COM

The American ISIS bride who wants to come home to the US has told how she wants the government to pay for her to undergo therapy if it allows her to return – and says she is hopeful they won’t send her to jail.

She’s not American. She doesn’t have American citizenship.

Hoda Muthana, 24, spoke on Wednesday in an interview with ABC News, her first since fleeing the terror group three weeks ago, from a refugee camp in northern Syria.

With her 18-month-old son balanced on her lap, she said she had given up the extremist ‘ideology’ that convinced her to leave her family and that she wanted to be welcomed home by the American people.

‘I’m a normal human being who has been manipulated,’ Hoda, who was 20 when she fled, said.

‘I hope America doesn’t think I am a threat to them and I hope they accept me…I hope they excuse me because of how young and ignorant I was.

‘I can tell them that now I have changed, now I am a mother, I have none of the ideology and hopefully everyone will see it when I get back.’

Asked what she would expect as a reasonable form of punishment for joining the terror group and calling for bloodshed in the US on social media, she answered: ‘Maybe therapy lessons, maybe a process that will ensure us that we’ll never do this again. 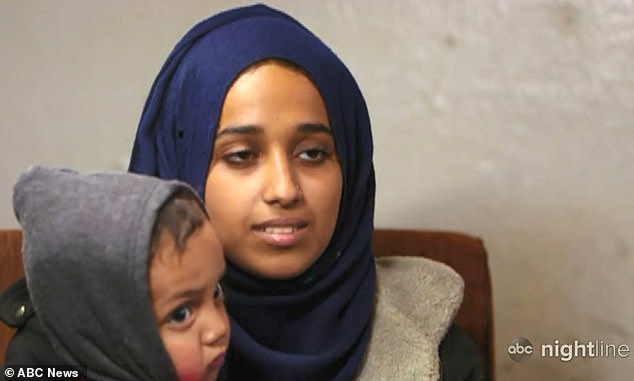 Hoda Muthana, 24, spoke in an interview with ABC News, shown abve, with her 18-month-old son Adam on her lap. She wants to come back to the US and is hopeful the State Department will retrieve her from the northern Syrian refugee camp where she is

‘Jail time, I don’t know if that has an effect on people. I need help mentally as well, I don’t have the ideology any more but I am just traumatized by my experience.’

She added that she cries herself to sleep ‘almost every night’ at the thought of being put behind bars.

‘I know that when I do get back I probably will be sentenced to jail for I don’t know how much time.’

Looking at her son, she said: ‘Thinking that my last few moments with him is stuck in a prison before another prison…’

Hoda also gave a confusing explanation for why she fled her parents’ home in Hoover, Alabama, in 2014 to join the oppressive Islamic State,  saying that it was because she wanted a more ‘Americanized life’.

‘I had a good relationship with my family but I wanted a more Americanized life. I just wanted to go out, I wanted to have, like, friends, go to places. I didn’t get any of that. 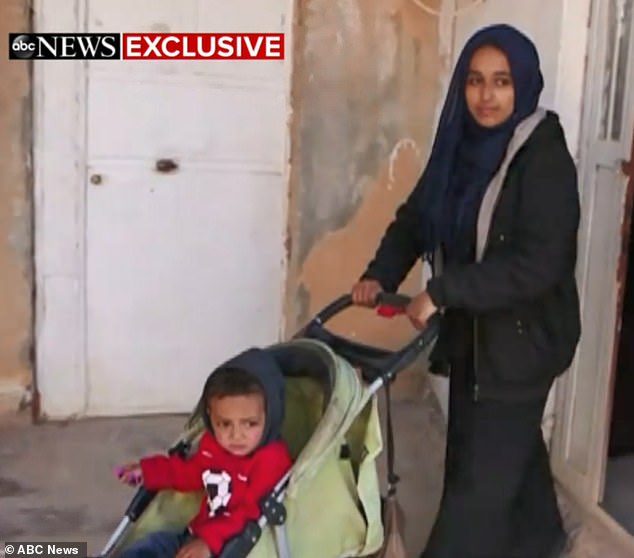 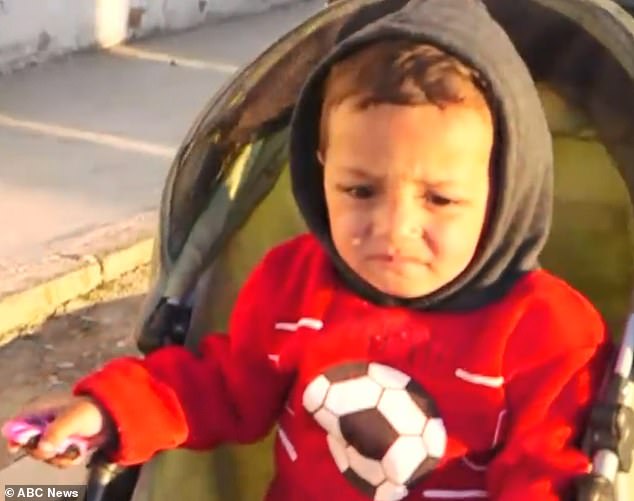 The 24-year-old said becoming a mother to Adam, her son with her second jihadi fighter husband, changed her

‘The only way out for me was to become practicing… to become more religious,’ she said.

Before she fled, she was part of a network of young Muslims who used Twitter to soak up extremist ideas. 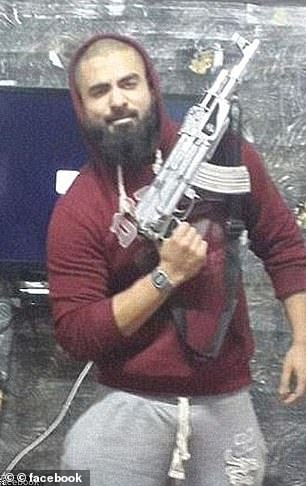 She said they were brainwashed and interpreted what they were told by predatory ISIS members ‘very wrong.’

The young mother also described how she chose her three husbands, two of whom were killed in battle, by selecting them from a list.

Laughing, she said that she and ‘200 other brides’ were kept in a room at a time and told who to pick from the list.

‘At a time there would be about 200 people. Everyone just gave their preferences on who they’d like to marry and you were given a list and you could choose.

‘It sounds very crazy,’ she said, adding they were all ‘just young girls, married for the first time.’

Hoda said she had become increasingly disenchanted with the lifestyle over the last few weeks as they ran out of food.

The bloodshed was more severe in person, she said, than she could have ever imagined and becoming a mother made her more sensitive to it.

‘We would see dead bodies in public, limbs splattered on the floor…when he was born I wanted to leave because I had a new motherhood instinct that I didn’t have before.’

Sousa, the town where she was living, had become increasingly desolate in the weeks before she fled. 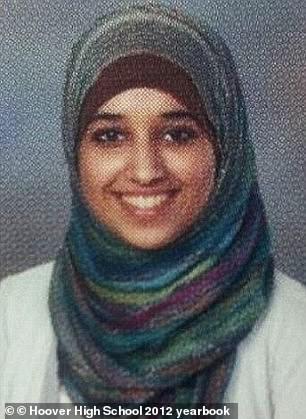 The woman is pictured in her high school yearbook. She said she fled to Syria because she wanted more freedom and that she thought she would get it by becoming ‘more religious’

‘There was nothing in the market, nothing in the shops… We just plucked grass from around our houses and fried it. Seeing my son eat grass, that was my last day,’ she said.

After spending two nights in the desert, she was captured by Kurdish forces and taken to the refugee camp in Northern Syria where she is now.

The State Department has not confirmed whether she will be allowed to re-enter the country and it remains to be seen if she will face charges.

State Department deputy spokesman Robert Palladino said that the status of US citizens detained in Syria ‘is by definition extremely complicated’ but added: ‘We’re looking into these cases to better understand the details.’

Her lawyers say she could be useful to the government and the FBI because she is familiar with the terror group.

Among her extremist tweets was one which read: ‘You have much to do while you live under our greatest enemy, enough of your sleeping!

She said in her interview that she ‘can’t believe’ she ever held those ideas.

Hoda’s first husband was Australian jihadist Suhan Abdul Rahman. After he died, she married a Tunisian  fighter and had her son Adam.

She has not named her third husband, a Syrian fighter who is still believed to be there.