Anti-Islam activist’s tour was scheduled to start on Friday

Tommy Robinson’s planned speaking tour of Australia has been postponed for a second time because he has not been granted a visa.

Supporters have paid up to A$995 (£563) for tickets to see the anti-Islam activist, alongside Proud Boys founder Gavin McInnes and Milo Yiannopoulos, in five cities.

Organisers of the Deplorables tour, which was due to start in Perth on Friday, said Robinson’s application was still being considered by authorities.

Dutch are ‘looking into’ bringing IS children back to the Netherlands

No Islamic savage left behind:

The Netherlands is ‘looking into’ the option of trying to move Dutch women and children living in refugee camps in Syria to safe areas where they can return to the Netherlands, justice minister Ferd Grapperhaus has told broadcaster NOS.

Arrests made after Al Jazeera investigation into French far right

Three members of the far-right Generation Identity group are charged with assault that was recorded in Al Jazeera probe. 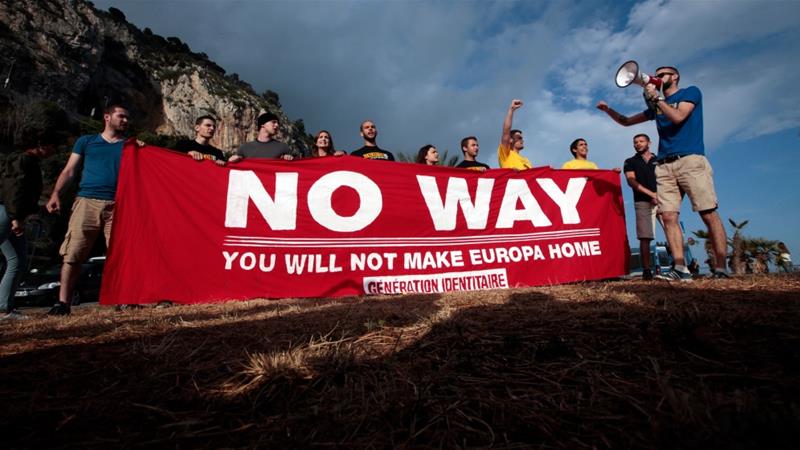 Viktor Orban attacks George Soros, who “is open about wanting to take over European institutions”

The European Parliament’s debate on the rule of law in Hungary will be a “George Soros-type seance, an election rally, a campaign event”, Prime Minister Viktor Orban told public Kossuth Radio.

Orban said he had always fought for “the Hungarian national interest” but he would not aid and abet next week’s “pro-migration campaign event” in Brussels.

The European left wing’s Spitzenkandidat, Frans Timmermans, who is currently the first Vice-President of the European Commission, is “Soros’s man”, he said, referring to the American-Hungarian billionaire.

Mohammedan Migrants pushed three 16-year-old Germans in front of train – mainstream media covered up the murders
.
Three young boys were pushed onto the rails at the Nürnberg S-train station Frankenstadion end of January. Two of them were ran over by the oncoming train and killed.
German mainstream media spoke deceitfully of “Germans”, in order to cloak a migration background. Furthermore drivel about “accident” and “tragedy” was put out there, and the three 16 year old’s “fell” onto the rails.
.
The Nürnberg News respectfully called the first offender that was arrested a “young man”.
Voice of Europe
The Nürnberg News respectfully called the first offender that was arrested a “young man”.
The Süddeutsche newspaper suggested that a fight between the youths had just taken a “tragic end”. Three 16 year olds were “falling” on the rails and were “caught by the train and ran over and killed”.
Even the Bavarian Rundfunk was of the opinion that the three Germans “fell” on the tracks:
“On Friday night, the two youths got into an argument with two other 17 year old youths at the Nürnberg S-train station Frankenstadion. All in all three 16 year old youths fell onto the train tracks during the argument.”
The next morning, BR Online described the double murder as an “accident”, by which “three men” after a fight “fell onto the train tracks”.
The Franken television channel even titled the murderous events as a “S-Train Disaster”. After a row the two victims “fell onto the train tracks” and were “killed by the nearing train”.
But on Monday morning BILD uncovered the bone hard truth: the murderers, who pushed the three German boys onto the rails, were a Turk and a Greek who were merely born in Germany.
The two victims, Luca and Frederic came from Heroldsberg. On Friday night they were visiting the Nürnberg dance club “Nightlife” and around midnight they wanted to ride home on the train.
At the train station, after meeting a third friend, they got into an argument with the migrants. According to the police, the fight started due to a ridiculously inane reason, which led to a highly aggressive reaction by the two offenders.
Surveillance footage proves that it was pure intent to push the three onto the rails, since the train had already been approaching the station at roughly 80 km/h.
Since that train usually does not stop at that station, it ran over Luca and Frederic at full speed. The boys didn’t stand a chance, and they were both killed instantly. Their friend could barely make it back out.