The #Christchurch terrorist was according to himself a communist who turned into a libertarian then into an “eco-fascist” He uploaded a manifesto on 8chan. (Peter Sweden)

A man claiming to be “Brenton Tarrant” from Australia posted a bodycam video of the attack.

Prime Minister Scott Morrison confirmed an Australian had been arrested in New Zealand, and said he had been briefed on the manifesto, describing it as “a work of hate”.

Across 74 pages, the man’s dossier regurgitated familiar objections to immigration and multiculturalism, and laments the “decaying” culture of the white, European West.

Media begins the lies; claims he s a ‘TRUMP SUPPORTER”

Scribblers from the Daily Mail blame Trump. These people are deranged: 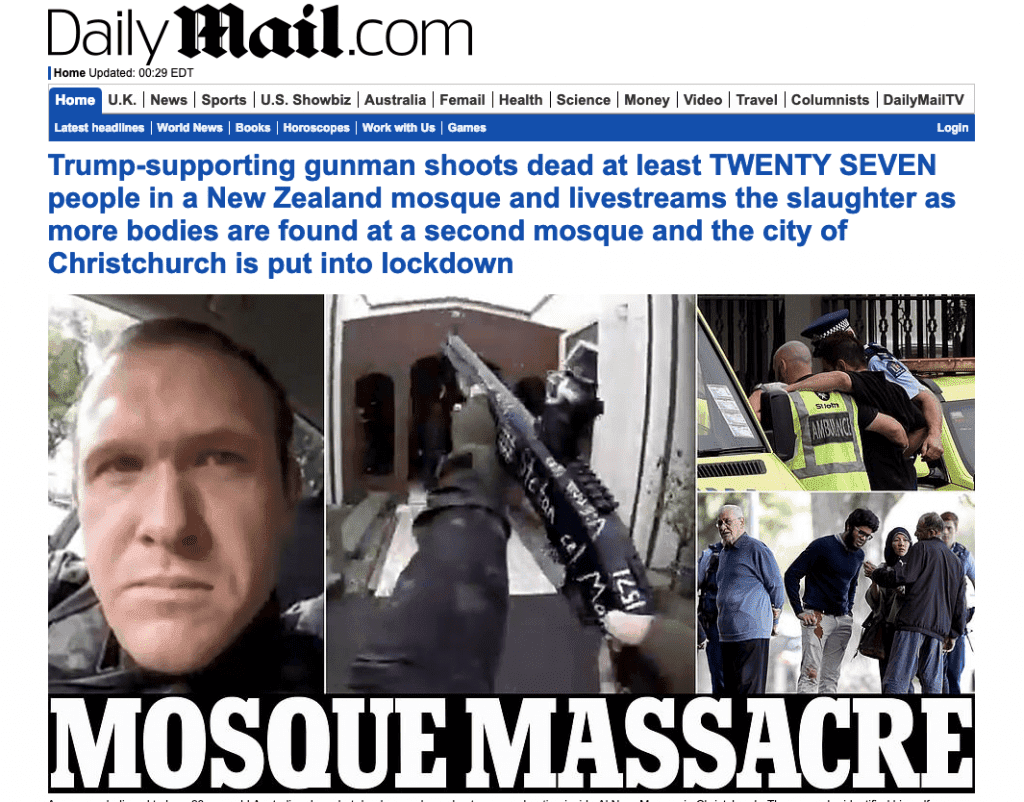 While he made several references to Australia, there is little in the document to suggest an explanation for his evil actions lies in some direct experience of the country or its politics.

Australia was no more than a “European colony”, in his view – “simply an offshoot” of its British colonists, and a lacklustre one at that.

He raised and then dismissed the idea he could have been radicalised by ideas given to him by friends or associates, because “those around [me] were the typical Australians, apathetic and for the most part apolitical, only truly showing motivation in matters of animal rights, environmentalism and taxation”.

“What is an Australian but a drunk European? Kidding, but Australia is a European colony, particularly of British stock and thereby an extension of Europe.”

Tarrant described himself as an “ethno nationalist eco fascist”, having previously identified as a communist, an anarchist and a libertarian. He wrote that he believed in “ethnic autonomy for all peoples with a focus on the preservation of nature, and the natural order”.

In the dossier, he made reference to the horrific Skaf gang rapes in Sydney in the year 2000. But his manifesto suggested he was preoccupied with rapes that had occurred in England and more recently in Germany by non-Europeans.

In particular, he referenced the sexual exploitation of approximately 1400 children in the northern English town of Rotherham in the late 1980s, 1990s and 2000s, primarily by British-Pakistani men.

Along with references to Rotherham, inscriptions on Tarrant’s equipment mentioned Alexandre Bissonnette and Luca Traini, mass shooters in Canada and Italy respectively.

He also included the names of several Serbian military figures, such as Milos Obilic, an apocryphal knight featuring prominently in accounts of the 1389 Battle of Kosovo against the invading Ottoman Empire, the Islamic superpower of its day, who was alleged to have assassinated the Ottoman Sultan.

Broken white men and the racist media that fuels their terrorism

Tarrant made reference to the Serbian Prince Lazar Hrebeljanovic, whom Obilic served and who was killed in the Battle of Kosovo.

Other names inscribed on Tarrant’s weaponry included Bajo Pivljanin and Novak Vujosevic, each of whom led uprisings against the Ottomans during later periods and were considered heroes within their communities, as well as Montenegrin general Marko Miljanov.

Also inscribed on his guns and ammunition were references to the 1683 Battle of Vienna, in which Christian forces defeated the Ottomans, and 1571, an apparent reference to the Battle of Lepanto in which the Empire suffered another defeat.

Music was playing in the car in the background of the video of Tarrant’s attack, one in the Serbian language, and one in German. The Serbian song references the “butcher of Bosnia”, Radovan Karadzic, a convicted war criminal and the political leader of Bosnian Serbs.

“Wolves are on the move from Krajina. Fascists and Turks, beware. Karadzic, lead your Serbs, let them see they fear no one,” the lyrics say.

It was not immediately clear whether Tarrant was involved in far-right neo-Nazi groups in Australia. However, imagery from Tarrant’s now-removed Twitter profile bears striking similarity to those used by a extreme-right, anti-immigration group called The Dingoes.

In his writing, Tarrant echoed views expressed by Anders Breivik, the Norwegian right-wing terrorist who killed 77 people with a van bomb and gun massacre in Norway in 2011.

He specifically mentioned Breivik by name, claiming he had “brief contact” with the mass murderer and had received a “blessing” for his actions from Breivik’s associates.

The dossier also praised United States President Donald Trump as “a symbol of renewed white identity and common purpose”, and addresses grievances about the left’s “march through the institutions”.

Mr Morrison confirmed the man was an Australian citizen and described him as a violent, right-wing extremist terrorist. He said he had been briefed on the dossier.

“It is the work of hate, I’ve got no other way to describe it,” he said. “What’s born of hate is never good.”

with Selma Milovanovic and Michael Bachelard

6 thoughts on “Christchurch & that dreaded “backlash””