It appears that Islamic criminials are the flavor of the month at the
Vatican, since little choirboys are more difficult to come by…

Mymymy, will the Islamophobia never stop?

Is the Christchurch shooting video genuine?

New Zealanders have been disarmed and converted to Islam because of it.  If they watch the vid or read the shooters manifesto, they will be jailed. And what could possibly make the gov’t do this to NZ citizens?

Who takes these Hollyweirdo’s seriously?

Turkish President Recep Tayyip Erdoğan has accused EU politicians Kati Piri, Federica Mogherini and Johannes Hahn of being enemies of Islam while criticizing a recent report adopted by the EU in favor of the official freeze of the membership process with Turkey, according to Turkish media reports on Friday.

There is no bigger sucker for Islam than Federica Mogherini. But for Erdogan, being a sucker is not enough. 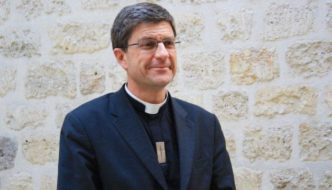 France: Archbishop “delighted” to participate in dedication of largest mosque in the country

How delightful. How broad-minded. How generous. When and where is Eric de Moulins-Beaufort’s kindness reciprocated? And is he aware of how Muslims entered France in the year 732? He apparently assumes that Islamic theology regarding jihad warfare against unbelievers has changed since then. It hasn’t. As the archbishop dreams of Reims being “a town of trusting mutual relations, full of new projects,” he may be in for a rude surprise.

“French archbishop ‘delighted’ to participate in dedication of mosque,” LifeSite News, March 25, 2019 (thanks to The Religion of Peace)

6 thoughts on “Is the Christchurch shooting video genuine?”