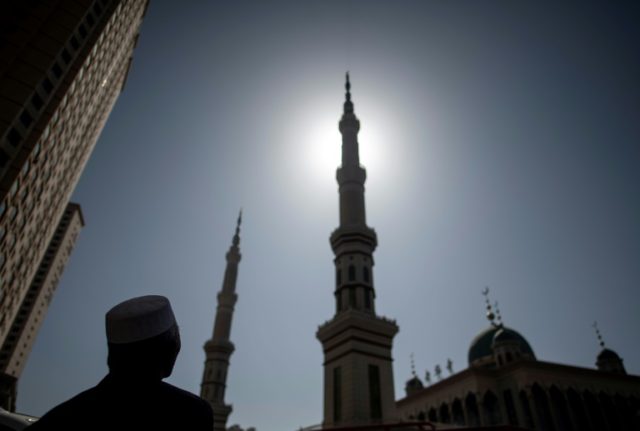 Hawk-eyed social media users and international outlets confirmed this week, using satellite images from services such as Google Earth, that several iconic mosques in China’s Muslim-majority province of Xinjiang no longer exist, suggesting that the communist government has launched a campaign to raze some of the region’s most culturally significant architecture.

The news follows the publication of an article in China’s state-run Global Times on Monday that declared China was in the process of establishing a “branch of Islam” that is “fitting Chinese culture,” and that the use of internment camps to force Muslims to abandon their faith or endure extensive torture was part of the process.

Under Communist Party chief Xi Jinping, the Chinese government has made the “indigenization” of religions – changing the tenets of all faiths to conform with communist ideals – a priority. Beijing has for years targeted churches, bulldozing houses of worship nationwide and destroying thousands of crosses on the buildings they did spare. In at least one instance, government officials buried Christians alive who refused to allow the demolition of their churches.

Now, after having established internment camps for Uighur, Kazakh, Kyrgyz, and other ethnic minority Muslims in Xinjiang, evidence has surfaced that culturally significant Uighur mosques are no longer standing.

The accusations first surfaced on Twitter, where activist Shawn Zhang posted satellite images of the location where the 800-year-old Keriya Aitika Mosque was once located. The Keriya mosque was one of several in Xinjiang no longer appearing on the ground. According to Forbes, the website Bellingcat picked up the claims and confirmed that at least two mosques “have undergone significant structural changes,” in Bellingcat’s words. Those structural changes appear to be complete destruction, but without visiting the site, such confirmation is impossible.

The Keriya Aitika Mosque, located in the Uighur city of Hotan, appears to no longer exist, as does the mosque that used to serve the city of Kargilik. The latter mosque appears to have existed through 2017, but ceased functioning as a common mosque that year and instead served as a propaganda hub for the Chinese Communist Party. An unnamed official told Radio Free Asia (RFA) in 2017, “We hold a flag-raising ceremony every Monday, and there is a flag flying on our mosque and ‘Love the Party, Love the Country’ banners as well. … We sing ‘Without the Communist Party, There is No New China.’”

Evidence suggests neither mosque exists as a building anymore, even as a propaganda center. The loss of the Keriya mosque is particularly significant given that, as the Turkish pro-Islamist newspaper Yeni Safak notes, it was inducted to the Chinese Architectural Heritage in late 2017.

The two mosques may be one of hundreds. Rachel Harris, writing for the Guardian, citeda 2017 report Sunday that suggest that as many as 200 Xinjiang mosques may have been destroyed that year with another 500 scheduled to be razed a year later. “Residents said that their local mosques had disappeared overnight, levelled without warning,” she wrote.

Radio Free Asia (RFA), in a report on mosques in Xinjiang, cited Hotan as one of the locations Chinese officials had targeted to destroy mosques in, according to local sources. The report, from September, said that locals were aware of a “campaign to destroy mosques as part of a wider crackdown on their religion.”

“During the campaign, authorities demolished thousands of mosques to ‘rectify’ the largely Muslim population, claiming that they were sorting out dilapidated buildings that posed a safety threat to worshippers in a bid to standardize and regulate the mosques,” according to RFA’s sources. RFA put their number of destroyed mosques much higher than Harris’s, at around 5,000.

The policy of destroying religious buildings had long taken shape elsewhere in the country against Christians. The campaign to level churches, or at least destroy the crosses that identify them as such, began under current Communist Party head Xi Jinping in 2014. By 2016, researchers had compiled evidence that thousands of churches had lost their crosses. Some of the most prominent Christian churches did not survive even without their crosses, however.

In one prominent case, Chinese police destroyed a prominent church in Henan province despite the physical opposition of its members. Ding Cuimei, the wife of the pastor of the now-destroyed Beitou Church in Zhumadian, stood before the church and refused to move. Authorities bulldozed her along with the church, burying her alive.

Chinese police continued to use surprise raids to demolish popular houses of worship into 2018, including the century-old Our Lady of Mount Carmel church in Henan.