The deputy defence minister today also revealed that there were nine suicide bombers – eight men pictured swearing allegiance to ISIS and one of their wives who blew herself up when police raided her home – and said eight have been identified.

They used two safehouses to mastermind the atrocity, he added.

Was Sri Lanka suicide bomber radicalised in BRITAIN? Authorities reveal terrorist studied in UK and how the ‘middle-class’ jihadists were ‘well-educated and financially independent’

One of the suicide bombers in the Easter Sunday terror attacks in Sri Lanka studied in the UK and Australia, it emerged today.

The country’s Deputy Defence Minister Ruwan Wijewardene did not name the terrorist, or which university or college he attended.

But he did say the attackers were all middle or upper class, well educated, from financially stable families, and that many of them had higher education.

The revelation that one of the terrorists studied in Britain sparked fears that he could have been radicalised at a university here.

Eight British nationals died when suicide bombers targeted churches and hotels, and the number of confirmed dead had risen to 359.

Security expert Professor Anthony Glees also suggested MI5 will know the identity of the bomber with the British link. 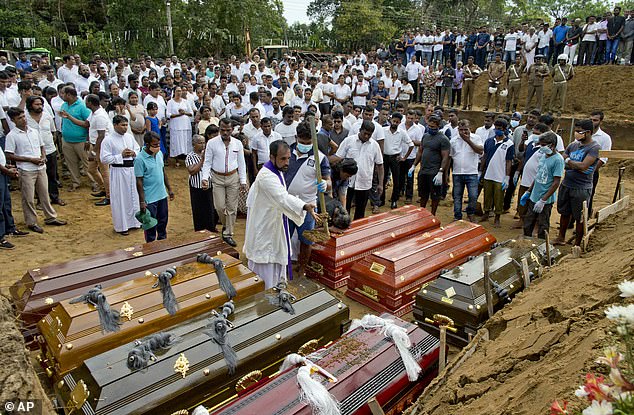 Minister raised the death toll from the attacks to 359 on Wednesday with 39 foreigners among the dead, 17 of whom have been identified (pictured, a mass burial in Negombo) 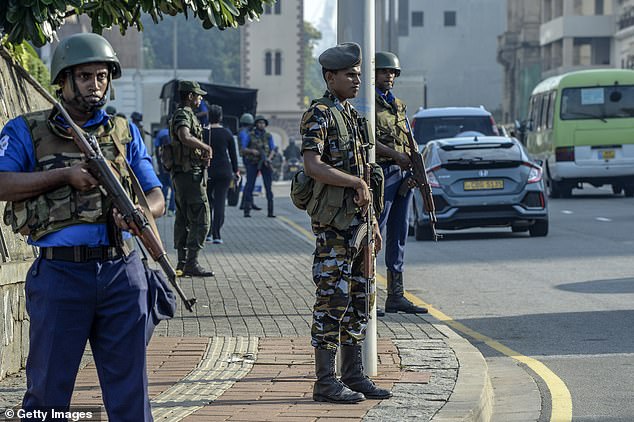 The clip, which Indian channel TV 9 claims shows the attacker, features a man wearing a large backpack as he enters St Sebastian’s Church.

It is believed the video shows the terrorist touching survivor Dilip Fernando’s granddaughter.

Dilip said yesterday: “At the end of the mass [my family] saw one young man go into the church in with a heavy bag. He touched my granddaughter’s head on the way past. It was the bomber.”

Islamic State has claimed responsibility for the Easter Sunday massacre in Sri Lanka that killed at least 321 people and wounded more than 500.

“Those that carried out the attack that targeted members of the US-led coalition and Christians in Sri Lanka the day before yesterday are Islamic State group fighters,” said a statement released by IS propaganda agency Amaq.

The group also put out an image of a group of men who it claims carried out the attacks.

The news comes as Sri Lanka’s defence minister said the attacks on churches and luxury hotels were in retaliation for the Christchurch mosque shootings.

Sri Lanka’s state minister of defence Ruwan Wijewardene told parliament the early findings of the ongoing probe found that the suicide bombings were committed in revenge for the Christchurch shootings at two mosques, allegedly carried out by accused Australian gunman Brenton Tarrant.

The death toll from the Sri Lanka terror attacks on churches and luxury hotels has risen to 321, with 500 injured. Islamic State is believed to be behind a video claiming responsibility for the deadly massacre.

Tributes to Aussie mother and daughter killed in attack

How Aussie victims were injured in Easter massacre

The Sri Lankan government earlier blamed the Islamist National Thowheeth Jama’ath (NTJ) group for the blasts, saying they were carried out in retaliation for last month’s attacks on two mosques in Christchurch.

The presidency said there was intelligence that “international terror groups” were backing Sri Lankan extremists.

Police sources told AFP on Tuesday that two Muslim brothers — sons of a wealthy Colombo spice trader — were among the perpetrators of the attacks.

Bomber queued for breakfast before blast

An attack on a fourth hotel failed and helped lead police to the Islamist group now blamed for the assault, they added.

The brothers, whose names have not been revealed, were in their late twenties and operated their own “family cell”, an investigation officer said.

Tuesday’s claim by IS comes one month after a Kurdish-led Syrian force announced victory over the IS proto-state, after routing jihadists from their last holdout in east Syria with backing from a US-led coalition. 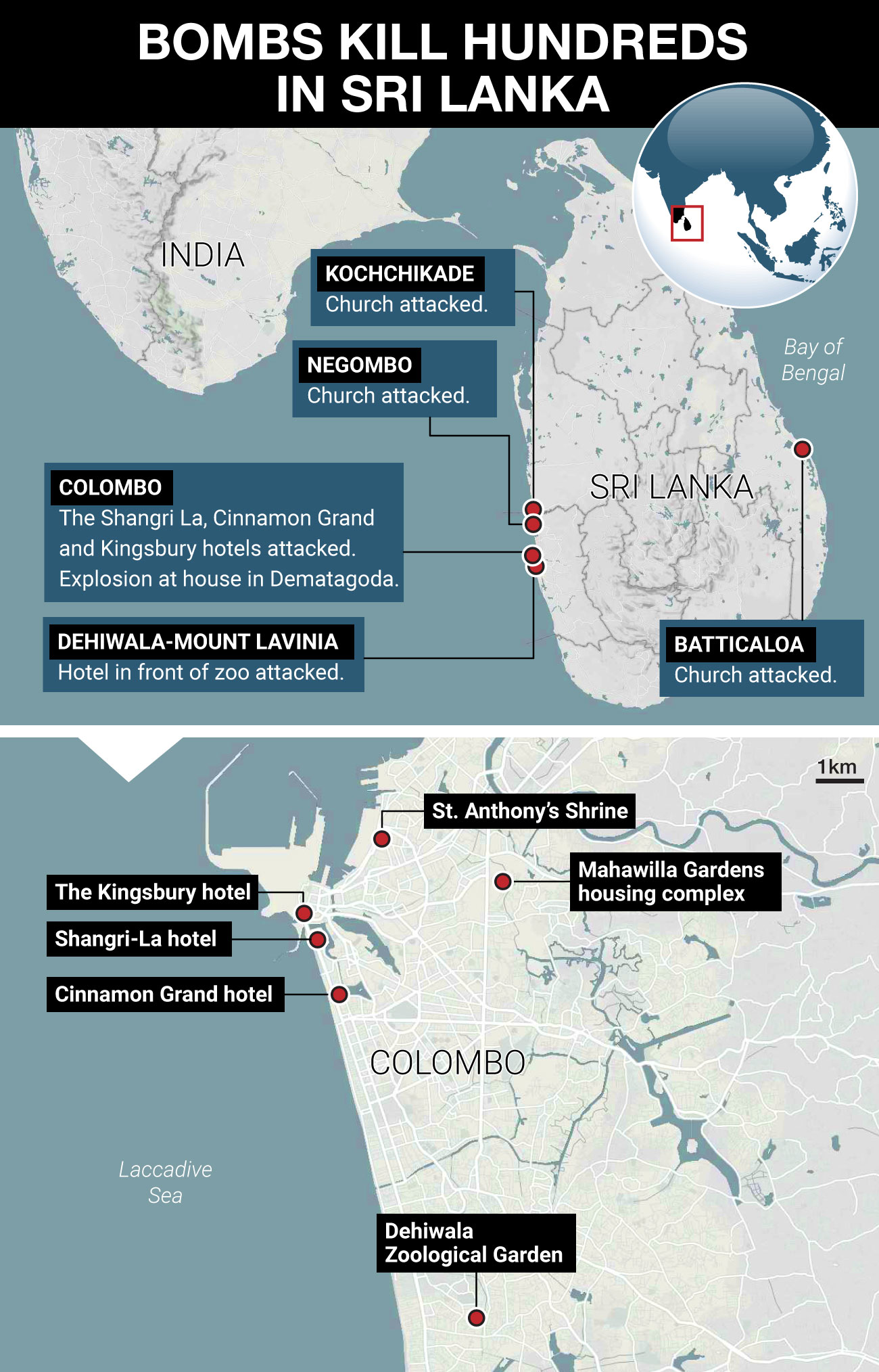 Even after losing their last scrap of territory in the eastern Syrian village of Baghouz, the jihadists retain a global network of recruits and have claimed attacks in Iraq, Syria and beyond.

On Sunday, IS claimed responsibility for an attack that killed 10 people and trapped around 2,000 for hours inside the communications ministry in the Afghan capital Kabul the previous day.

In Darwin, Prime Minister Scott Morrison has paid his respects to those killed in the attacks, including Melbourne mother and daughter Manik and Alexandria Suriaaratchi, at a special prayer service.

Earlier, he confirmed that the Australian Federal Police would be joining Sri Lanka’s investigation effort.

“AFP and our people are now joining the investigation efforts,” he said.

“We’ve made those offers and they’ve been responded to and so we’ll be assisting wherever we can with these investigations.”

A state of emergency was imposed on the country, giving the police and the military special powers to counter militant strikes.

It also means suspects can be detained without a court order.

There has been no official confirmation as to whether the video is genuine. It was not posted on an official IS media channel, but rather, one believed to be run by supporters of the terrorist group.

How Aussie victims were injured in Easter massacre

The video also depicts several people believed to be the suicide bombers connected to the attack, but who are referred to as “assailants” rather than much-used IS term, “martyrs”.

That’s a lie. Mohammedans don’t need any pretext to wage jihad on unbelievers.

Wijewardene told Parliament the government possessed information that the bombings were carried out “by an Islamic fundamentalist group” in response to the Christchurch attacks. He also blamed “weakness” within Sri Lanka’s security apparatus for failing to prevent the nine bombings.

“By now it has been established that the intelligence units were aware of this attack and a group of responsible people were informed about the impending attack,” he said. “However, this information has been circulated among only a few officials.”

The office of New Zealand Prime Minister Jacinda Ardern issued a statement responding to the Christchurch claim that described Sri Lanka’s investigation as “in its early stages.” “New Zealand has not yet seen any intelligence upon which such an assessment might be based,” it said.

As Sri Lanka’s leaders wrangled with the implications of an apparent militant attack and massive intelligence failure, security was heightened for a national day of mourning and the military was employing powers to make arrests it last used during a devastating civil war that ended in 2009.

The six near-simultaneous attacks was Sri Lanka’s deadliest violence in a decade.

Word from international intelligence agencies that a local group was planning attacks apparently didn’t reach the prime minister’s office until after the massacre, exposing the continuing political turmoil in the highest levels of the Sri Lankan government.

Prime Minister Ranil Wickremesinghe said he feared the massacre could unleash instability and he vowed to “vest all necessary powers with the defense forces” to act against those who were responsible.

Authorities said they knew where the group trained and had safe houses, but did not identify any of the seven suicide bombers, whose bodies were recovered, or the other suspects taken into custody.