Israel’s troops are reportedly preparing to siege the Gaza border after Palestinian militants fired more than 450 rockets on to their territory which killed the first Israeli citizen since 2014.

Seven Palestinian’s have also died, including a pregnant woman and a one-year-old-baby, in airstrikes as Israel retaliated.

The fighting came as leaders from Hamas, the militant group that rules Gaza, and the smaller armed faction Islamic Jihad, were in Cairo for talks with Egyptian mediators aimed at preventing a fraying ceasefire from collapsing altogether.

It also comes at a sensitive time for Israel, which is to mark its Memorial Day and Independence Day holiday this week, before hosting the Eurovision song contest in the middle of the month. Prolonged fighting could overshadow the Eurovision and potentially deter international travelers from coming in for the festive event. 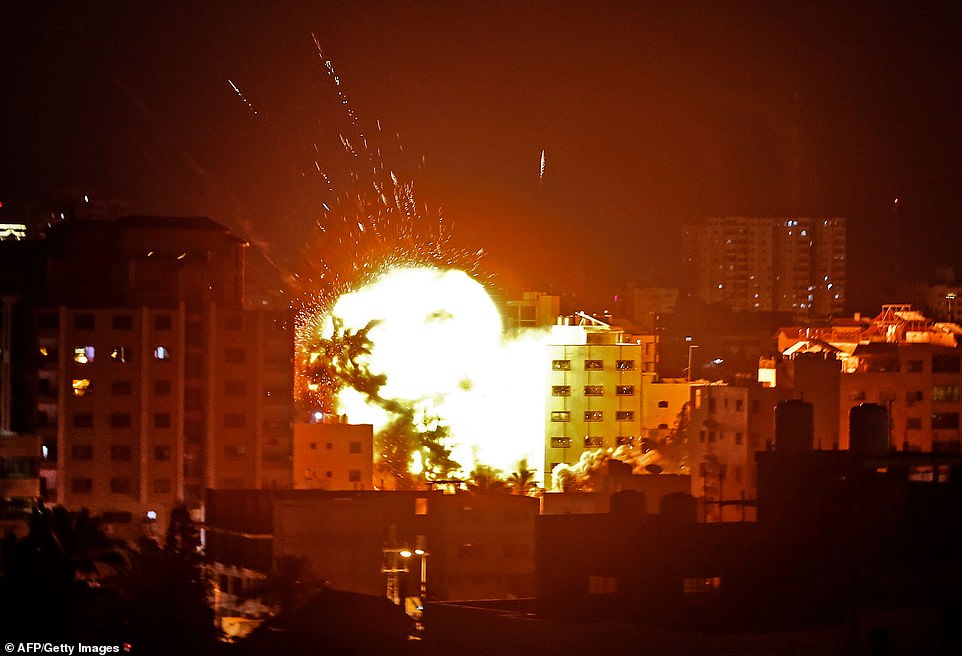 The Gaza health ministry reported a 22-year-old man as well as a 14-month-old baby and her pregnant mother killed, with 17 others wounded 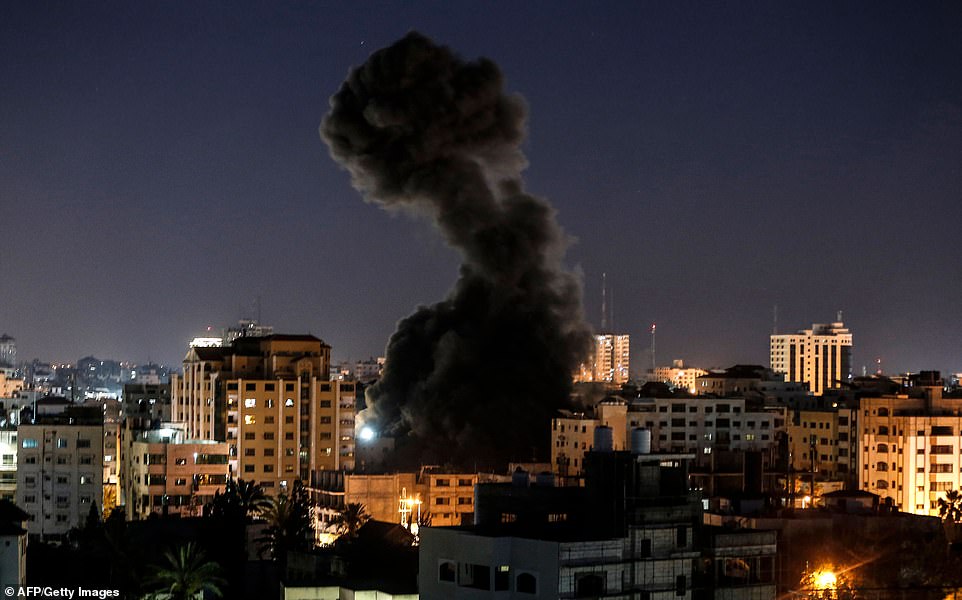 An Israeli army spokeswoman said the military did not have any information on the incident involving the baby. The army said earlier it was targeting only military sites (pictured: Gaza City) 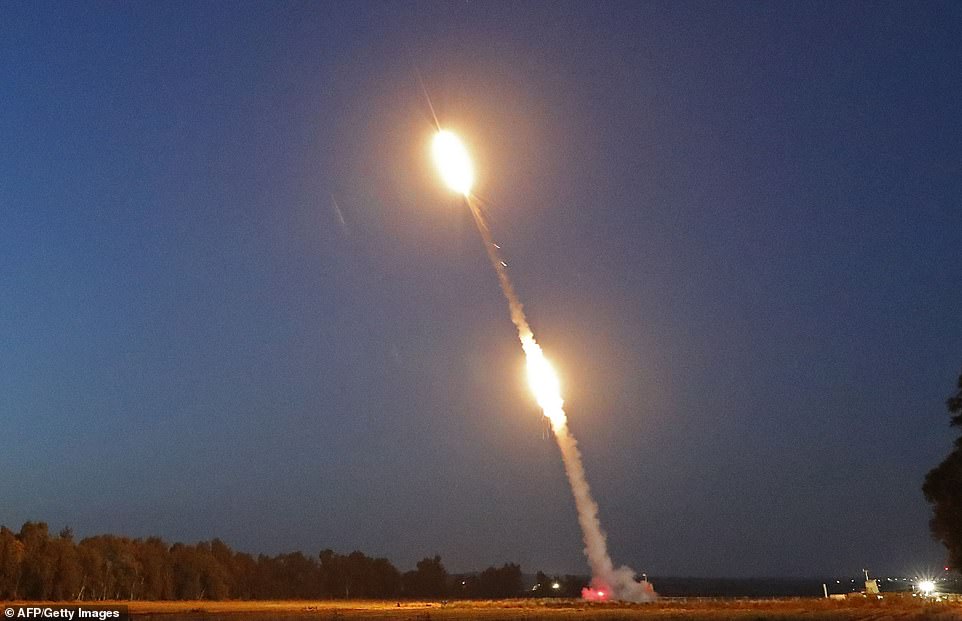 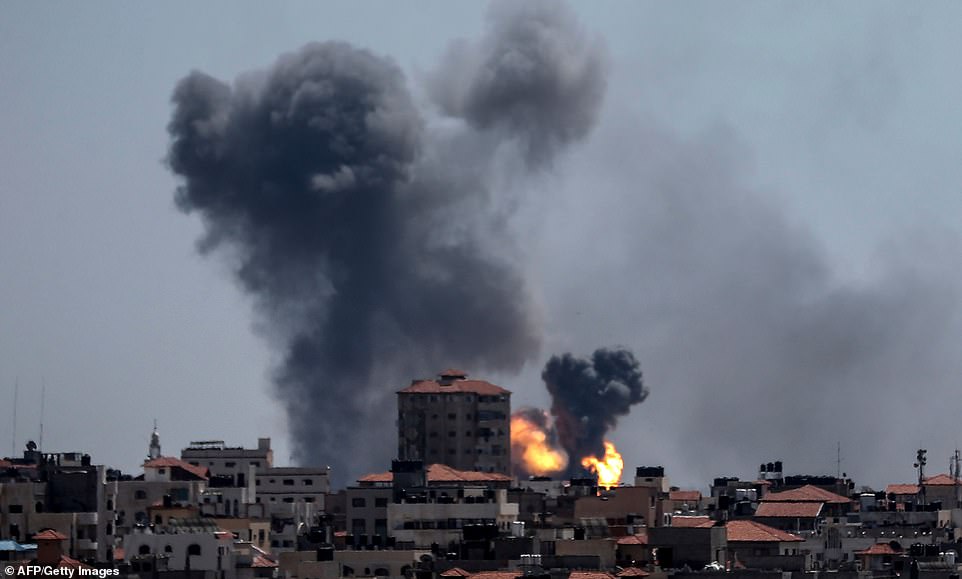 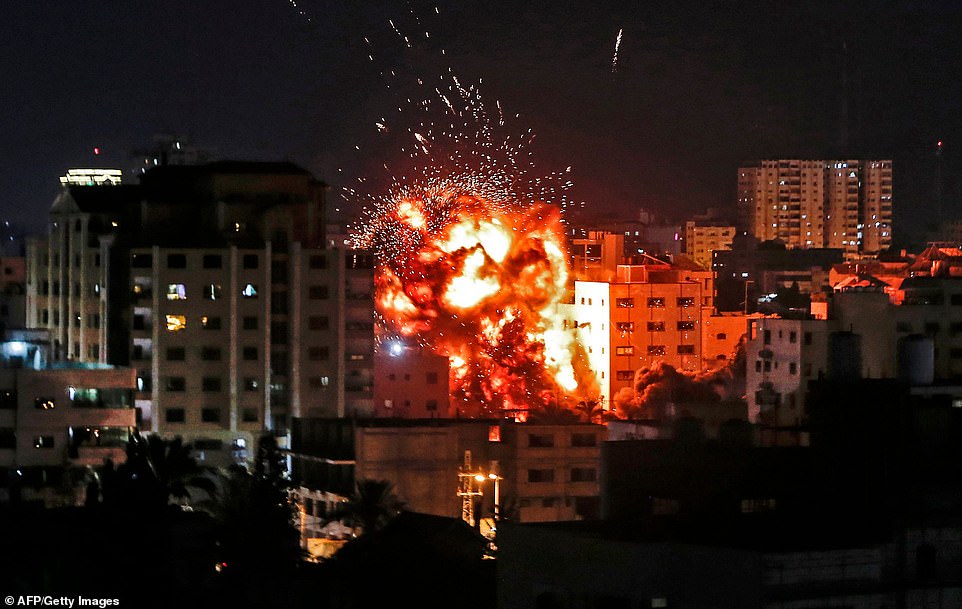 One woman was seriously injured in a rocket strike on the Israeli city of Kiryat Gat, some 13 miles from the Gaza border, police said (pictured: Gaza City)

Now, the ceasefire has totally been shattered as Israeli Defence Forces are standing by to invade the blockaded Gaza strip, according to the Independent.

On Saturday video footage of a family screaming in fear during rocket attacks was posted on social media.

Israel and Hamas, an Islamic group that opposes Israel’s existence, have fought three wars and dozens of smaller flare-ups of violence since Hamas seized control of Gaza in 2007.

They engaged in several days of heavy fighting in March before Egypt brokered a truce in which Israel agreed to ease a crippling blockade on Gaza in exchange for a halt in rocket fire.

In recent days, Hamas accused Israel of reneging on its pledges as militants began to fire rockets into Israel.

In a familiar scene, air raid sirens wailed across southern Israel throughout the day and into the evening as barrages of rockets were repeatedly fired.

Retaliatory airstrikes caused large explosions to thunder across Gaza, as plumes of smoke rose into the air. Outgoing Palestinian rockets left long trails of smoke behind them.

Gaza’s Health Ministry said a 14-month-old girl, Seba Abu Arar, was killed in an Israeli airstrike that hit their home in east Gaza City. Her pregnant mother, 37, was severely wounded and died later at the hospital, the ministry added. Another child was moderately injured. 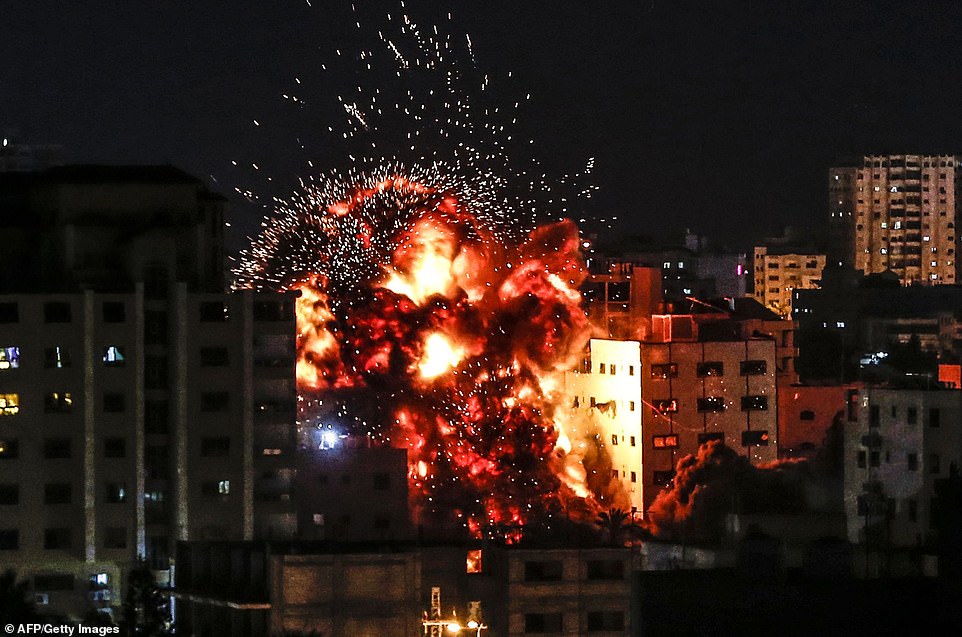 An explosion is pictured among buildings during an Israeli airstrike on Gaza City on May 4, 2019 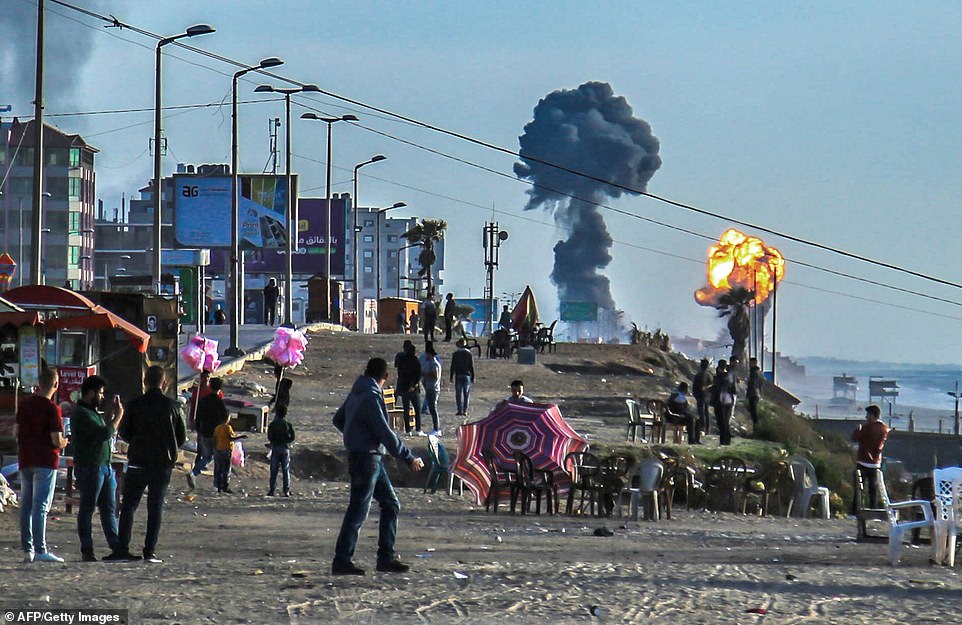 The Israeli military accused the Iranian-backed Islamic Jihad of instigating the latest round of violence by shooting and wounding two Israeli soldiers Friday (pictured: Fire rises in Gaza on May 4)

In Israel, medical officials said an 80-year-old woman was severely wounded by rocket fire, a 50-year-old man was moderately wounded by shrapnel and a teenage boy was mildly hurt as he ran for cover. Israeli police said a house in the coastal city of Ashkelon was damaged.

The Israeli military accused the Iranian-backed Islamic Jihad of instigating the latest round of violence by shooting and wounding two Israeli soldiers Friday. It said the shooting was not coordinated with Hamas, but said it holds Hamas, as the territory’s ruling power, responsible for all fire emanating from Gaza.

State Department spokeswoman Morgan Ortagus said ‘the United States strongly condemns the ongoing barrage of rocket attacks by Hamas and Palestinian Islamic Jihad from Gaza upon innocent civilians and their communities across Israel.’

‘We stand with Israel and fully support its right to self defense against these abhorrent attacks,’ she said in a statement. 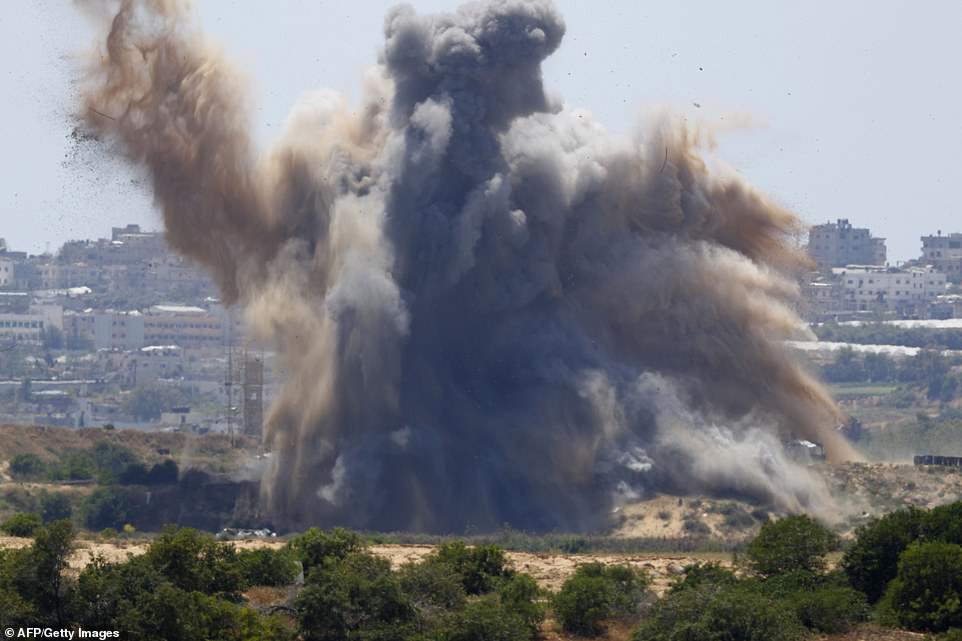 By nightfall, the army said militants had fired well over 200 rockets into Israel. It said dozens of the rockets were intercepted by its Iron Dome rocket-defense system. But it closed roads near the Gaza border to civilian traffic and closed a popular beach as a security precaution.

The military said it struck some 120 targets in Gaza, including Hamas and Islamic Jihad military compounds, a Hamas rocket-manufacturing site and a ‘high-end Islamic Jihad tunnel’ that it said stretched into Israel for use in attacks.

Late on Saturday, Israel struck a building that it said housed Hamas military intelligence offices in Gaza City. Another airstrike hit a six-story commercial and residential building. Journalists said the building housed the office of Turkey’s news agency Anadolu. There was no immediate comment from the Israeli military.

COGAT, the Israeli defense body responsible for Palestinian civilian affairs, said it was closing the fishing zone off Gaza’s coast altogether and sealing Israel’s two land crossings with Gaza. The crossings are used by Palestinian medical patients to enter and exit the territory, and provide the main entry for cargo into the blockaded territory.

The U.N.’s Mideast envoy, Nickolay Mladenov, said the United Nations was working with Egypt to restore calm and called on all sides to ‘de-escalate’ and restore recent understandings.

A statement from Palestinian militant group Islamic Jihad, allied to Hamas, claimed responsibility for at least some of the rocket fire and said it was prepared for more if necessary (pictured, rocket fired from Gaza towards Israel)

‘Those who seek to destroy them will bear responsibility for a conflict that will have grave consequences for all,’ he said in a statement.

Islamic Jihad, which sometimes acts independently of Hamas, threatened to fire longer range rockets toward Israel’s heartland. In a video that also was seen an implicit claim of responsibility, it showed archived footage of militants attaching warheads to rockets.

Israel and Egypt have maintained a crippling blockade on Gaza since Hamas seized control of the territory in 2007.

Under the recent understandings, Israel agreed to expand a fishing zone off Gaza’s coast, increased imports into Gaza and allow the Gulf state of Qatar to deliver aid to cash-strapped Gaza. But like previous Egyptian-mediated agreements, those understandings have shown signs of unraveling in recent days.

Hamas has hoped that Egyptian mediators could further ease the blockade, which has ravaged Gaza’s economy. For over a year, the Islamic group has orchestrated mass demonstrations each week along the Israeli frontier to draw attention to Gaza’s plight. More than 200 Palestinians and an Israeli soldier have been killed in the border protests.