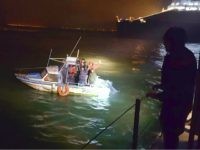 Hundreds of Illegal Migrants Pouring Across the English Channel

Tell me please: how did these African savages make it to Mexico? And what kind of entitlement do they have to seek resettlement in the U.S.? Hundreds of African migrants gathered on the Mexican side of the bridge that separates Laredo, Texas, from Nuevo Laredo, Tamaulipas, on Monday.

A large group of African migrants gathered on the south side of the Laredo Port of Entry to protest U.S. immigration policies that are keeping them from entering the U.S. to claim asylum, KGNS reported. The group claims that “not enough is being done” to help them get asylum into the U.S.

“The group claims that “not enough is being done” to help them get asylum into the U.S.'”

Why should anything be done to help them settle in the U.S.?

And what the hell are a bunch of freaking Africans doing crossing Mexico to get into Texas, unless Soros paid to have them container shipped over here.

Salvini is a BOSS!!

"If you're requesting asylum & in the meantime deal drugs, strike a police officer or mug someone, my dear YOU'RE NOT A REFUGEE YOU'RE A CRIMINAL. YOU'RE OUT even if it's by a hot air balloon!"