Bestselling author and radio and TV personality Mark Steyn told the committee June 4. “Free speech is for speech you revile. The alternative to free speech is approved speech.” 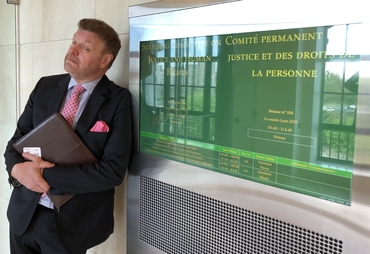 Steyn prepares to enter the belly of the beast

On Tuesday Lindsay Shepherd, John Robson and I gave evidence to the House of Commons Standing Committee on Justice and Human Rights. The overall vibe of the event was summed up by this headline:

To deal with that first point: As noted on Monday, Conservative Party leader Andrew Scheer yanked vice-chair Michael Cooper from the committee for his unacceptable “insensitivity” to a Muslim witness. In a further outbreak of sensitivity enforcement, on Tuesday morning the committee voted to erase not just Mr Cooper but the entirety of his “insensitive” testimony. Simply as a point of law, it strikes me as a bit iffy to edit live testimony for essentially political reasons: out of solidarity among Her Majesty’s Dominions, Mr Trudeau’s ministry has agreed with Ms Ardern’s in New Zealand that the name of the killer should not be mentioned. Why that should be binding on Opposition members hearing evidence I do not know. Our pal Andrew Lawton notes further inconsistencies.

Still, at the beginning of my opening statement, I put in a word for the “defenestrated” Cooper. There really isn’t much point in chaps like me fighting to get Section 13 repealed if you don’t have a broader culture of free speech – and, with respect to that, conservative leaders who rush to toss you overboard at the hint of anything allegedly “controversial” are a big part of the problem.

Given the fate of Michael Cooper, every other Tory on the committee was on notice. Thus, the next order of business was one of semi-erasure: The Steyn-Shepherd-Robson hearing was scheduled to be televised, but the committee voted instead to make us audio only – and every Conservative went along with it. From the CBC:

Tuesday’s meeting, which heard from free speech activists Mark Steyn, John Robson and Lindsay Shepherd, was initially to be televised, but MPs voted to have it recorded for audio only.

Here’s how that happened:

Once we got on to the witnesses here’s how it was reported (not wholly accurately, in my view) by the Canadian Press:

At one point, Steyn shouted over Toronto Liberal MP Ali Ehsassi, who was asking if Steyn regretted some of the things he’s said publicly about Muslims and Islam.

Steyn admitted that he had made “obnoxious” statements in the past, but refused to discuss controversies that had already been dealt with by human-rights tribunals.

“That’s been adjudicated and I’m in the clear, I beat the rap,” Steyn said.

“I don’t think you were adjudicated as to whether you were obnoxious or you were hurtful,” Ehsassi countered. Steyn again conceded his statements had been hurtful.

During his testimony, Steyn argued against the potential reinstatement of Section 13 of the Canadian Human Rights Act, which governed online hate speech and was repealed through a Conservative MP’s private member’s bill in 2013. He contended that the issues of online hate should be discussed in a space where people regulate themselves, rather than one restricted by laws.

Indeed. A little more on that from the Catholic press:

The biggest threat to free speech is “the malign alliance between government and high-tech,” warned Steyn. He described as chilling a recent meeting Prime Minister Justin Trudeau participated in with French President Emmanuel Macron and British Prime Minister Theresa May sitting opposite the heads of Facebook, Twitter, Google, and Apple – “six woke billionaires” who “regulate the opinion” of billions of people.

“This is far more of a threat than some “pimply-faced neo-Nazi” writing on the Internet “from his mother’s basement in the prairies,” said Steyn, who faced hate speech complaints under Section 13 of the Canadian Human Rights Act in 2007 and under similar legislation in two provinces for articles he wrote for Maclean’s magazine about Islam. Steyn and the magazine won, but their legal costs were well over $1 million and $100,000 for Steyn personally. A Conservative private member’s bill repealed Section 13 in 2013 under the Harper government.

Ah, happy days – when my legal bills were a mere six figures. After my American adventures, I’d welcome a new Canadian suit.

And finally the Pajama Boys at Vice:

The event ended with Mark Steyn refusing to apologize for his past statements on Islam and biovating about freedom of speech.

I don’t know what biovating is, but we need more of it.

I would advise Canadians, and Americans, wishing to understand the Canadian zeitgeist at this time, pay attention to this video and the outcome of these hearings.

Here is the bill under discussion.

The controversy regarding the CHRC’s practices comes from its enforcement of Section 13(1) of the Canadian Human Rights Act, prior to its repeal, which stated that it is discriminatory to communicate by phone or Internet any material “that is likely to expose a person or persons to hatred or contempt.”