Sea Watch ship carrying 42 refugees and migrants enters Italian waters despite an order from Rome to stay over. 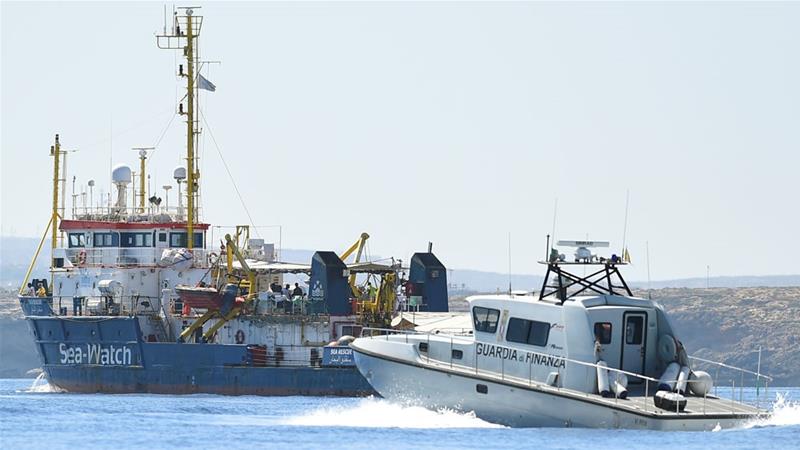 A German charity ship carrying 42 refugees and migrants rescued off the coast of Libya has entered Italian waters, defying an explicit ban by the country’s far-right interior minister, Matteo Salvini.

The captain of the Dutch-flagged boat decided to head to the island of Lampedusa on Wednesday because the situation on board was “now more desperate than ever”, the Berlin-based charity Sea Watch said in a statement.

“I’ve decided to enter the port of Lampedusa,” Captain Carola Rackete said, according to a tweet from Sea Watch.

“I know this is risky, but the 42 shipwrecked on board are exhausted. I will bring them to safety.”

“I decided to enter the port of #Lampedusa. I know what I’m risking, but the 42 survivors I have on board are exhausted. I’m taking them to safety.”

“Enough, we’re entering. Not to provoke, but by necessity, responsibility,” Sea Watch quoted the captain as saying.

Marine tracking websites showed the vessel had entered Italian territorial waters after spending 14 days sailing back and forth off the coast of Italy‘s southernmost island. Shortly after the ship entered Italian waters, Italian coastguard boats went out from Lampedusa to flank it.

In his first reaction, Salvini did not mince his words.

“They are not allowed to dock, I am ready to send the police … this has broken my balls,” Salvini said in a Facebook video.

In a subsequent statement, he called the Sea Watch “an outlaw ship” and said Rome had asked the Dutch government to assume responsibility for the migrants.

“I will not give permission for anyone to disembark… Our patience is over. The Netherlands will answer. Nobody will disembark unless someone cares to take them to Amsterdam, Berlin or Brussels. I’m totally fed up with this,” said Salvini.

According to a decree approved in June, Italy’s Ministry of the Interior has the power to deny access to the country’s territorial waters to vessels that it considers a risk to security or public order, and to fine these vessels.

Salvini, who heads the far-right political party the League, has repeatedly accused charity rescuers of being complicit with people smugglers and has closed Italy’s ports to their boats.

More than 400 refugees and migrants have arrived in Italy over the last two weeks aboard smaller vessels, while the Sea Watch has zigzagged on the high seas without a safe port.

“We can’t hold on any longer. It’s like we’re in a prison because we are deprived of everything. Help us, think of us,” one person from the Ivory Coast said in a video broadcasted by Sea Watch.

Carlotta Sami, spokeswoman for the United Nations High Commissioner for Refugees in Italy, expressed concern over Wednesday’s events, saying: “It’s serious when the captain has no other choice but to honour her sense of responsibility at the cost of personal consequences.”

She added: “The UNHCR asks for the security decree to be revised and for a system of rescue and disembarkment to be created. The criminalisation of NGOs must end.”

Dozens of German cities have said they are ready to welcome the refugees, and the Bishop of Turin, Cesare Nosiglia, said on Monday that his diocese would be willing to take them in.

On Lampedusa, where Salvini’s far-right League won 45 percent in May’s European elections, a priest has camped in the street to demand that those on board – including three minors – be allowed to disembark.

Last month, an Italian magistrate ordered the Sea Watch seized after it rescued dozens of refugees and migrants. The magistrate then accused the crew of breaching immigration rules. The vessel was released at the start of June and returned to the Libyan coastline.

In January, 32 migrants rescued by the vessel were stranded on board for 18 days before they were allowed to disembark in Malta thanks to a distribution deal made between several European countries.

Migrant arrivals to Italy have plummeted since Salvini took office a year ago, with 2,456 crossing the Mediterranean so far this year, according to official data. That figure is down 85 percent compared to the same period in 2018, and down 96 percent compared to 2017 levels.