Twitter & Fakebook are censoring free speech & are thereby endangering the future of western civilisation. We were lectured by Hussein Obama that “the future must not belong to those who slander the prophet of Islam”. Twitter warned Michelle Malkin & Jamie Glatzov that they were violating Paki blasphemy laws. This has to stop.

Twitter uses digital totalitarianism yet again to enforce sharia in the Netherlands:

AMSTERDAM (Reuters) – Dutch politician and anti-Islam campaigner Geert Wilders said on Friday that Twitter had temporarily blocked his account following remarks he made about a political rival. 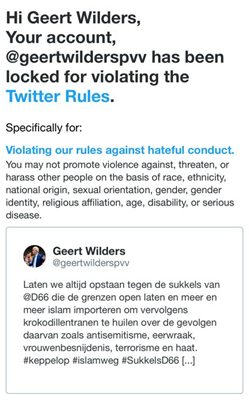 Wilders, who cannot easily appear in public due to threats against him by Islamists, relies heavily on Twitter to communicate with his supporters. He has 811,000 followers, second only to Prime Minister Mark Rutte among Dutch politicians.

“Twitter often tolerates death threats against me, but not a factual tweet by me about a colleague. Madness!” he said in a statement.

Twitter could not immediately be reached for comment. A spokesman for Wilders’ Freedom Party sent a screenshot of his account showing the ban, which was due to expire in around eight hours.

The tweet that led to Wilders’ block referred to D-66, a progressive center-left party as “suckers… who import ever more Islam and then weep crocodile tears over the consequences, such as honor killings.”

Wilders is currently appealing a 2016 conviction for inciting discrimination for an incident in which he led followers in chanting they wanted “fewer! fewer! fewer” Moroccans in the Netherlands.

Read the rest at Reuters.