The Chinese business community holds the purse-strings in Malaysia. The call to expel them is dumb, but not unislamic. Islam doesn’t tolerate others. 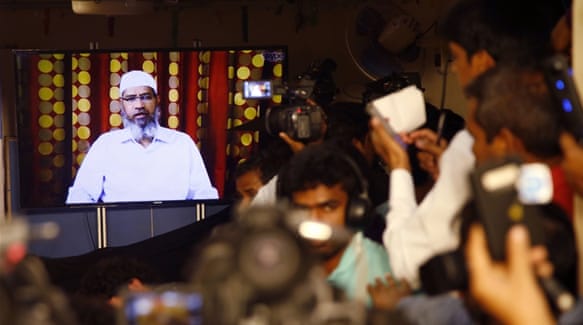 Kuala Lumpur, Malaysia – Indian Muslim preacher Zakir Naik has ignited outrage in Malaysia after suggesting the expulsion of its ethnic Chinese minorities, even as the country’s cabinet mulls the possibility of cancelling his permanent residency.

On Wednesday, two ministers told Malaysian Prime Minister Mahathir Mohamad at a cabinet meeting that Naik needs to be deported as his speeches were “inflammatory in nature”.

At least four cabinet ministers have called for Naik’s deportation along with other senior politicians.

“We have expressed our position which is that action must be taken and that Zakir Naik should no longer be allowed to remain in Malaysia,” said Communications and Multimedia Minister Gobind Singh Deo and Human Resources Minister M Kulasegaran in a joint statement.

“The Prime Minister has taken note of our concerns. We leave it to him to consider the position and to decide soonest possible what will be done to deal with the problem,” the statement said.

Sources with knowledge of the cabinet meeting told Al Jazeera that Mahathir said he “will solve the problem”.

“But he gave no details,” the source added.

It was unclear when the cabinet will make a decision on Naik.

Naik, who was granted permanent residency in Malaysia by the previous government, has been living in the country for the last three years.

He drew a huge public outcry for his recent comment that Hindus in the Southeast Asian country had “100 times more rights” than the Muslim minority in India, and that they support the “prime minister of India and not the prime minister of Malaysia”.

Naik also took aim at the country’s Chinese community, when addressing calls for him to leave the country, saying the ethnic minority should leave first as they were “guests” of Malaysia.

“You know, someone called me a guest. So I said, before me, the Chinese were the guests. If you want the new guest to go first, ask the old guest to go back,” said Naik.

“The Chinese aren’t born here, most of them. Maybe the new generations, yes,” said Naik during a dialogue on August 8 in Kelantan state.

The hashtag #ZakirNaik trended to the third spot on Malaysia Twitter on Wednesday as his latest statement started to spread on social media.

Discussions on race and religion, which are sensitive issues in Malaysia, have come to the fore in recent weeks.

Muslims make up about 60 percent of its 32 million people. The rest are mostly ethnic Chinese and Indians, most of whom are Hindus.

In response, Naik accused the media of twisting his words and misquoting him.

“My praise of the Malaysian government for its Islamic and fair treatment of Hindu minorities is being twisted and misquoted to suit political gains and create communal rifts,” Naik said in a statement to reporters on Wednesday.

But video recordings of his speech uploaded by news portal Malaysiakini shows him making the reported remarks against Malaysian Hindus and ethnic Chinese.

“I know many Chinese and Indians who are willing to die for this country that they love. It is ridiculous to even think that my fellow Malaysians are my guests,” said Syed Saddiq, who is the minister for youth and sports.

Asked by reporters whether he backed the calls by three other ministers asking for Naik’s deportation, the minister was quoted as saying, “Yes.”

“They are my family for God’s sake. Enough is enough,” he said.

Minister of Water, Land and Natural Resources Xavier Jayakumar said if Malaysia were to ignore Naik’s statements and allow him to continue his ways in Malaysia, it would lead to “potential racial and religious division”.

“We do not need such individuals to issue seditious statements with the intent to drive the wedge between Muslims and non-Muslims in Malaysia,” said Minister Jayakumar.

But Malaysian state news agency Bernama also quoted Prime Minister Mahathir as saying late on Tuesday that Naik cannot be sent back to India for “fear of being killed” there.

That would be a blessing. Have no fear. Just do it.

“If any [other] country wants to have him, they are welcome,” he said, according to Bernama.

In 2016, India banned Naik’s foundation after allegations of promoting religious division in the country, allegations that the preacher has denied.