EMMANUEL MACRON’s Europe minister has vowed to push ahead with the embattled president’s integrationist plan which would see EU members states more closely aligned on the vetting of immigrants, climate change policy and co-operation on defence.

Amelie de Montchalin denied the plot was built on Mr Macron’s desire for greater power in the bloc as she hit out at “dangerous” populist movements springing up across Europe. The 34-year-old will have a friend in Ursula von der Leyen, the new European commission president, as she tries to overcome resistance from less-liberal EU leaders who those who are wary of Mr Macron’s ideals. 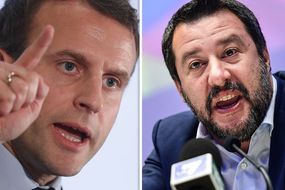 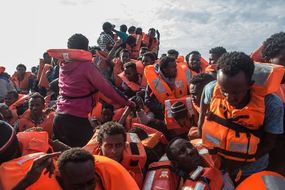 In an interview with the Financial Times, Mrs de Montchalin said EU states need to be more on the same page when it comes to immigration policy and accept their fair share of newcomers arriving on Europe’s shores.

She said: “Immigration is not about being hard or being soft – it’s about being responsible and showing solidarity.

Absurd. How idiotic and absurd.

What kind of gibberish is that? No country in Europe has an obligation to allow African savages & Mohammedan headchoppers  invade their territory.

“And then to show solidarity because the migration flows cannot be only dealt with and managed by the countries of first entry.
.
Keep. them. out,  There are no “migration flows”.  It is every patriot’s duty to stop them.

“We cannot let only Spain, Italy, Malta and Cyrus having to deal with the migration because if we do so we create what we know at the moment populist movement, which because it’s not managed and organised with solidarity and responsibility have freeway to have very dangerous ideas.”

The absurdity of this sentence is appalling.

Her comments come after Italy’s populist government boycotted a meeting of European ministers in July to address the migrant crisis.

There is no “migrant crisis”. There is an invasion by unassimilable savages to destroy Europe & it’s nation-states. Europeans must fight this invasion & the traitor class that enables this to the death.

Interior minister Matteo Salvini, of the far-right League, objected to France and Germany setting the EU’s refugee policy while Italy remains at the forefront of the issue.

Mrs de Montchalin said people should not equate France’s ambition to an incessant need to be in control.