In 2016, "Rivers of Blood" flowed through the street of Bangladesh for Eid-al-Adha👉a major Islamic Holiday where animals throats are cut, but not deep enough to kill them instantly, just enough so they thrash around, bleeding out in pain as they lay dying. pic.twitter.com/4tKdzZUOJn

Today on the Islamic Holiday of Eid al-Adha, throats of tied-up, fully conscious animals are slit, w/o cutting the spinal cord, b/c that would alleviate pain. They believe the longer animals writhes in pain, the more the panic hormones are released, which makes meat taste better. pic.twitter.com/84txEaSaWw

One Injured in Norway Mosque Shooting 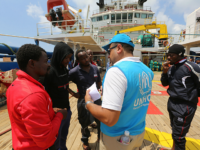 A small price for Soros & his ilk….

Trump Will Use FCC, FTC to Fight Social Media Censorship

About time that something is done about this. Hong Kong police have fired tear gas at demonstrators after petrol bombs exploded in the downtown bar district of Wan Chai as clashes during a tenth weekend of protests in the city intensified.