‘Heads must roll’: Outrage at how high-security jail could let Jeffrey Epstein die

For reasons still unclear, the jet-setting 66-year-old financier, who had faced up to 45 years in prison on charges of sex-trafficking dozens of teenage girls — accusers who have also implicated many in his circle of powerful, wealthy pals — had recently been taken off suicide watch, officials said. WaPo Writer: ‘People Close to Epstein Fear He Was Murdered’…

The FBI and the Department of Justice’s Inspector General were opening investigations, US Attorney-General William Barr said, adding that he was “appalled” to learn of his death in federal custody.

“Mr Epstein’s death raises serious questions that must be answered,” Mr Barr said in a statement.

At the MCC, two jail guards are required to make separate checks on all prisoners every 30 minutes, but that procedure was not followed overnight, according to the source, who was not authorised to speak on the record. In addition, every 15 minutes guards are required to make another check on prisoners who are on suicide watch.

Mr Epstein was housed in the Special Housing Unit (SHU), even though guards are required to remove prisoners on suicide watch from the unit, according to a Twitter post by Preet Bharara, a former US attorney for the Southern District of New York.

The SHU separates inmates such as accused sex offenders deemed likely to be harmed by other prisoners from the general population.

Mr Epstein had been confined to the correctional centre while he appealed a district judge’s refusal to let him live under 24-hour guard in his opulent townhouse on Manhattan’s Upper East Side.

After Mr Epstein’s arrest, prosecutors said a search of his townhouse, conducted under a warrant, uncovered evidence of hundreds, and perhaps thousands, of nude photographs of “what appeared to be underage girls”, including some photos catalogued on compact discs and kept in a locked safe.

An attorney for Mr Epstein said prosecutors and the press had “blood on their hands”.

He said in a statement that jailers at the Metropolitan Correctional Centre failed to protect Mr Epstein and to prevent the “calamity” of his death.

VIDEO: A LAWYER REPRESENTING EPSTEIN ACCUSERS SAYS THERE IS A “A CERTAIN AMOUNT OF SHOCK AND DISBELIEF”. (ABC NEWS)

Mr Fernich added that Mr Epstein had “long since paid his debt to society” for his crimes. He said Mr Epstein had the “misfortune to be a wealthy man in the #metoo era.”

Mr Fernich said his statement comes as an “outraged citizen and defence lawyer”, not as a representative of Mr Epstein.

In a court filing on July 25, the government said it was pursuing an “ongoing investigation of uncharged individuals” in connection with the case against Mr Epstein.

That investigation, in the US Attorney’s office in Manhattan, will continue despite Mr Epstein’s death, a different source familiar with the matter said.

The well-connected money manager was known for socialising with politicians and royalty.

Over the years, he counted now-President Donald Trump and former Democratic president Bill Clinton as his friends, and, according to court papers, Britain’s Prince Andrew.

None of those people was mentioned in the indictment laying out the charges against Mr Epstein.

The charges against Mr Epstein were announced more than a decade after he pleaded guilty in Florida to state prostitution charges after a deal with prosecutors that has been widely criticised as too lenient.

Aja Davis, a spokeswoman for the New York City Office of the Chief Medical Examiner, said she could not say how Mr Epstein died before her office examined the body.

Mr Epstein’s death came a day after the unsealing of a court filing in which a woman who accused Mr Epstein of keeping her as a sex slave said one of the financier’s associates had instructed her to have sex with at least half a dozen prominent men.

The claim by Virginia Giuffre came in a deposition that was included in about 2,000 pages of documents related to her defamation lawsuit against Ghislaine Maxwell, the associate whom Ms Giuffre said helped Mr Epstein procure girls for sex.

Lawyers for Ms Maxwell did not respond to several phone and email requests for comment.

Ms Maxwell, 57, the daughter of the late publishing magnate Robert Maxwell, has never been charged with a crime and has denied allegations that she acted as a “madam” of the operation.

Mr Epstein had faced similar charges in 2007, but negotiated a deal to avoid federal prosecution and plead guilty to a single Florida state prostitution charge.

His arrest last month came amid increased #MeToo-era scrutiny of the 2008 non-prosecution agreement that allowed Mr Epstein to maintain his jet-set lifestyle, which includes homes in France and the US Virgin Islands.

Under the once-secret deal — overseen by Alexander Acosta, who was the US lawyer in Miami at the time and later became Mr Trump’s Labor Secretary — Mr Epstein pleaded guilty to state charges of soliciting a minor for prostitution.

He avoided a possible life sentence and served 13 months in jail, during which he was allowed out to go to his office during the day.

The deal also required that he reach financial settlements with dozens of his alleged victims and register as a sex offender.

Mr Acosta resigned last month after coming under fire for overseeing that deal.

But Mr Epstein’s lawyers maintained that the new charges brought by federal prosecutors in New York were covered by the deal and were improper.

They said he hadn’t had any illicit contact with underage girls since serving his 13-month sentence in Florida.

Before his legal troubles, Mr Epstein led a life of extraordinary luxury that drew powerful people into his orbit.

He lived on a 100-acre private island in the Caribbean and one of the biggest mansions in New York.

The degenerates from the ABC cannot resist establishing a long debunked connection between Trump & Epstein. A connection that was short and quickly terminated when Trump kicked Epstein out of Mare Lago. Slick Willie (Clinton) of course is on record having been to Epstein’s pedo Island 28 times.

Donald Trump speaking of his longtime friend Jeffrey Epstein in 2002: “I’ve known Jeff for fifteen years. Terrific guy. He’s a lot of fun to be with. It’s even said that he likes beautiful women as much as I do, and many of them are on the younger side.” 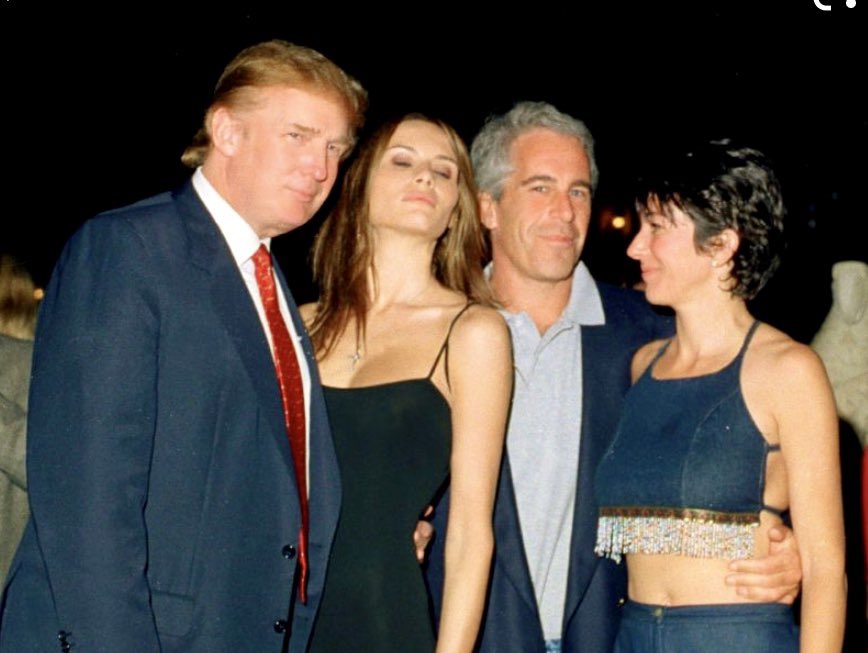 A college dropout, he became a sought-after benefactor of professors and scientists, donating millions of dollars in donations to Harvard University and other causes.

Mr Trump told New York Magazine in 2002 that Mr Epstein was a “terrific guy” who “likes beautiful women as much as I do”.

Old photos of the President with Mr Epstein were shared on Twitter, as was a video of Mr Trump having a man removed from one of his rallies in 2018 for holding up an image of the pair together.

After Mr Epstein’s arrest in July, Mr Trump told reporters he “knew [Epstein], like everybody in Palm Beach knew him” but “I had a falling out with him. I haven’t spoken to him in 15 years. I was not a fan of his, that I can tell you.”

That’s ABC reporting for you.